Wasps Content from the guide to life, the universe and everything 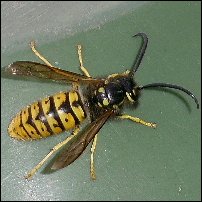 Wasps are generally yellow and black1 striped flying insects that are similar to bees but with several differences;

Humans have one main advantage over wasps: We can see them buzzing about in their stripey coats. To them we're like a vast lumbering office block: too big and slow-moving for them to actually notice.

If you attack them on their own ground, hitting them with a rolled-up newspaper for instance, they'll be too fast for you. But while their compound eyes are good for noticing movement, they cannot see glass and they won't notice your huge shape moving up. So if you catch a wasp resting, particularly against a window, cover it with a tumbler. Nudge it with the edge of the tumbler and it will walk around the inside, puzzled. Slip a saucer under it and your wasp is both trapped and portable. According to taste you can take it out into the garden and release it, put it in the freezer to die, or splash a little water and washing-up liquid into the saucer, which will also kill it when it wanders down for a drink. That way the wasp will be disarmed and eliminated without any risk to you.

Wasps are thirsty creatures. They have even been seen drinking from underneath wet towels on a washing line. If you've got a bird bath, fish pond or water feature in your garden, you've got a pit-stop for the neighbourhood wasps. Maybe it's not the best place to sit down next to with a cup of tea and a jam doughnut after a hard day's work.

Wasps are perverse creatures who love to fly into your house and, outside, will always fly up to the person who hates wasps the most. For this reason many types of wasp traps have been developed.

How To Trap Wasps

The reasons for trapping wasps should be obvious. Anyone who has spent time outdoors in summer with sugary food will instantly understand. It seems irrational to be banished from your own garden by a creature about 1/1000th of your size but, all too often, it happens. A simple solution is readily available: the home made wasp trap.

To make a wasp trap, you will need:

Start by cutting the top off the bottle at the point where it becomes as wide as the body of the bottle. The bottom part of the bottle should now look a bit like a jar with a lumpy base. Put the wasp attracting stuff into the bottom of the bottle. Put the top of the bottle back upside down so it forms a funnel leading down into the bottle. Seal the edges if there is not a good contact all the way round, using tape, gum, leaves, whatever is most appropriate. The wasps smell the sugary food and fly down the funnel into the bottle. Having eaten they try and leave but here they encounter a problem. Wasp logic dictates that when escaping from inside something you fly to the highest point. The wasps buzz round and round the top, but very rarely notice the exit further down.

The wasps in the trap attract other wasps with their frantic activity, so the effectiveness of the trap is almost exponential. However, sooner or later there will be too many and the trap will not work so well. This raises ethical considerations about disposing of the trap. A wasp is, after all, an instrument of the wider ecological system it exists in. We humans, sadly, have lost this ability. Selfishly killing wasps puts you in a morally grey area. The authors are not responsible for feelings of guilt, reprehension, and unfavourable judgement in the afterlife as a result of following these instructions.

Your imagination and psychological stability are the only limit to the number of ways to dispose of the wasps. Allegedly, the most painless way (for the wasps, you may shed a tear or two) is to put the trap in a freezer until the wasps freeze to death. Filling the trap with water works too, but is quite nasty. The advantage of these methods is that they allow the trap to be reused quickly. Releasing the wasps is the most karmatically sound approach, but could have unpleasant consequences, so careful thought is advised.

Take a paper bag as big as your head and inflate it. Tie off the end so it retains its shape and hang it near where you do not want them to go. The wasps will think it is an enemy nest and stay away. However, wasps are not stupid, just a little slow, so when you have finished whatever it is you do not want the wasps to participate in, take down the bag, otherwise they will see through the ruse.

1But do come in other colours.