The Raspberry Content from the guide to life, the universe and everything 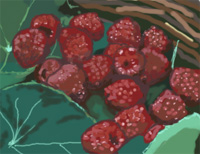 The Raspberry (Rubus idaeus), is a bushy plant with tiny thorns, small white flowers and lovely greenish leaves that produces a slightly sourish but sweet, red fruit. The fruit itself is soft and shaped almost like a very tiny, furry, scarlet-coloured bunch of grapes, but does in fact neither look nor taste anything like grapes. The raspberry fruit is very pleasing to the palate, but does tend to leave lots of little seeds stuck between one's teeth when eaten. Raspberry bushes, referred to as 'canes', generally grow in forest clearings or fields and if left unchecked can potentially take over the entire planet, much like the red weed in HG Wells' War of the Worlds, but perhaps that is a slight exaggeration.

Thought to have originated in Asia Minor, the red raspberry was most probably cultivated throughout Europe by the Romans. Another variety, the black raspberry (or blackcap) - not to be confused with the blackberry - is a North American native, while there is a third variety of the fruit: the golden raspberry. The red raspberry is the most well-known available for and best eaten as soon as possible after picking, retaining its flavour and vivacity. It is for this reason that many choose to cultivate raspberry canes in their own gardens or allotments, keeping the plant confined in either trellis or wire frameworks, in order to have access to the wonderful fresh fruit. Many commercial farms, orchards and specialist 'berry' farms offer the raspberry as a fruit to pick fresh also, for those not able to grow plants, either because they have no room in their own garden or have the horticultural ability of a brick. Raspberries are easily plucked from within the cane, making them common fare for small birds, tiny animals and schoolchildren.

The raspberry has many uses, including herbal remedies. Raspberry leaf tea is not only said to relieve stomach cramps and the symptoms of morning sickness, but can also aid the healing of mouth ulcers. The leaves when ground to a poultice are beneficial to the healing of burns and scalds, promoting new tissue growth.

The fruit is equally useful - raspberry wine and raspberry syrups are easily made, with the syrup being used to make drinking cordial or added to ice-cream for a delicious dessert known as 'raspberry ripple'. Certain cultures enjoy adding raspberry to their beer; some Australians add a dash of raspberry syrup to lager in order to make what is known as a 'snake-bite'1, while the Belgians (and some other nationalities) have gone one step further and added raspberry syrup to the brewing process to produce an interesting raspberry beer. Raspberry syrup is also added to a number of alcoholic drinks to make some tantalising cocktails.

The raspberry has other properties too. Not only is it used in dyeing fabrics lovely deep red or pinks or being made into quite delectable breakfast jams, it has also long been a favourite in desserts. The raspberry can be added to summer pudding, fruit salads, fruit sorbets and even just simply served with a dollop of ice-cream or whipped cream for a sweet and delicious conclusion to a meal.

The word raspberry can also be used to describe a bodily noise made by buzzing the tongue between the lips. Sometimes called a 'Bronx cheer', the term 'raspberry' derives from cockney rhyming slang;

"Oi guvna, did you drop a raspberry tart? There's a right Dame Judy in here, got up me bugle like a rat up a drainpipe."2

The buzzing action is often accompanied by various hand gestures, such as patting the top of one's head, sticking one's thumbs in one's ears or the sticking of the first two fingers of a hand into the air in a 'V'. It is a common form of insult or answer to a rude remark made by another. In literature (particularly comic books), raspberries are spelled in various ways, including 'Thppft!', 'Pbththth!' and 'Thbbfpt!'. Any extended string of p's, b's, t's, and h's will successfully convey the idea.

It's easy to make a raspberry and also pretty handy too - so here's a step by step guide to produce the perfect insult:

As long as there is no space between your tongue and your lips, you should make a respectable raspberry. By varying the length of exposed tongue and the amount (and rate) of air expulsion, the character of the raspberry can be varied as can the position of the tongue in the mouth to give differing intonations to the raspberry. Unless the raspberry is intended to display extreme disgust or insult, it is probably wise to avoid spitting more than is necessary. Practice makes perfect. Another aspect of blowing the raspberry is against bare skin. This produces a louder, more flatulent and wetter sounding raspberry and is often performed on babies and small children, reducing them to fits of laughter.

It's not usually considered a compliment in most parts of the world to blow a raspberry at someone; therefore, it is recommended that you use discretion when thinking of performing the act. The enaction of a thoughtless raspberry could lead to such consequences as: unemployment if directed at your employer; injury if directed as a large ape-like being guarding the doors of a nightclub; war if directed at a foreign dignitary, or crop failure if directed at the sky.

The popstar Prince (or The Artist Formerly Known as Prince, or Symbol) - the one that sang 'Purple Rain' and 'When Doves Cry' - also sang a song entitled 'Raspberry Beret'. A catchy number, it is quite interesting as to what the singer was actually referring to in the lyrics as the sexual connotations are exceedingly apparent...

A rock band of the 1970s also went by the name The Raspberries and had hits with the songs 'Go All the Way', 'I Wanna Be With You' and 'Overnight Sensation'.

There are also the much sought after by any B-Grade film director/actor Razzie Awards, that represent the blowing of a raspberry at what are considered very poor films/acting.

1Only in southern parts of Australia, namely New South Wales and Victoria. In other regions of Australia, and indeed the world, if you ask for a 'snakebite' you will receive a half glass of lager and a half glass of cider.2Translates as follows; "Hey mate, did you fart? There is a stench in here that has got right up my nose."