Allotments Content from the guide to life, the universe and everything 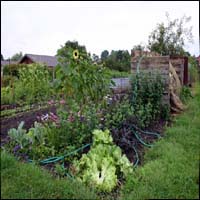 At first glance local allotments may appear to have little to offer to the average citizen except for a mass of rank undergrowth, lopsided sheds and old men in flat caps reminiscing about Burma. This is a great shame. In fact, allotments are plots of land provided by local councils in urban areas so that they can grow their own produce.

Allotments reached their peak of popularity during the austere war years of the 1930s and 1940s, but their popularity began to decline soon after. They used to be a way for the townsfolk to provide their families with cheap, healthy vegetables while the farm workers went off to fight in World War II.

The myth is that they are largely populated by the survivors of the war who are too old to work their plots with the vigour of youth, and spend most of their time smoking pipes and telling tales of the great pumpkin harvest of 1968.

Where are the young plot-holders to replace this fading breed? As more and more of the older generation move on to the great dahlia bed in the sky or become too ill to turn the brown, crumbly loam, their patches are becoming infested with a tangle of brambles and bindweed, not to mention the proliferation of old mattresses and rusty bike frames that appear in any vacant plot.

The reality is very different. As the race for developing new homes never seems to end, this has an impact on allotments. First, that they are being sold off for housing, and second, that the demand is growing as new homes have smaller and smaller gardens, with some homes in crowded cities having no gardens at all. People who want to grow organic vegetables for their family may have a hard time finding a suitable allotment (perhaps their home was built on the last allotments in the area).

Where to get your Allotment

Your first stop should be the local council, and hope they have a vacant one in not too bad shape. If there are no allotments in your area, but there is demand, the local council has a duty to provide them. Demand usually means six or more homes registering an interest. There may be a waiting list in your area, so if transport allows, try to look at a few different places.

Allotments are not market gardens, so it's not a good idea to set up your allotment, thinking you will be making a profit from selling your produce. Generally they are for 'personal use' only, however, many people do sell on their surplus crops, if they can't find enough friendly faces to hand it around to. Communities often benefit from allotment produce grown locally, and supplied to local cafes, particularly 'community' cafes.

Other ways to benefit from your allotment include:

In an environmentally conscious age, we should be making the most of these green lungs in our city. You can always guarantee that your own vegetables will be chemical free and non-genetically modified. Allotments, however, provide more than just fresh vegetables for your table. They are a living community crossing age, gender and race barriers. They provide somewhere for the tired urban dweller to go and breathe and learn to touch the earth again. In short, they are a haven from the evils of city living.

A Note of Warning

Your vegetables are unlikely to grow in the uniform colour, and definitely won't grow in the uniform shape, that you will find in your local supermarket. Potatoes aren't naturally a nice ovoid shape. Carrots aren't always neatly tapering to a lovely orange point. They can be lumpy, bumpy, have bits in, or on, odd blemishes, and may be covered in a brown clammy stuff (known to vegetable gardeners as 'mud'). They may also have small holes in where the local wildlife has had a sneaky munch. Just wash off, or in extreme circumstances, cut off (or round) anything that looks a bit dodgy when preparing. No need to throw away.

There are the occasional spots of vandalism. There may still be the occasional feud over the 'largest pumpkin' competition but it is still the most relaxing way to spend a Sunday afternoon.

Rent an allotment now and make them beautiful again, before your local city council decides to cover them with more concrete and tarmac.