Blackberries and Brambling Content from the guide to life, the universe and everything 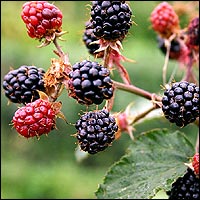 In the autumn1, if you are lucky enough to live near some hedgerows or wild areas thick with brambles, it is possible to enjoy the challenge of brambling, which is picking blackberries (the fruit of the bramble). The drawbacks to brambling are the thorns of the bushes and the likelihood of getting dyed by purple berry juice, so wearing clothes which are inadequate to prevent scratches (such as those leaving bare arms or legs) or which can be easily snagged, torn or irreparably stained, is thus not a good idea.

What is a Blackberry?

In case anyone got through the introduction without realising it, this entry is not about trademarked electronic gizmos designed to replace pen and paper.

For those interested in classification, the blackberry belongs in the family Rosaceae, which includes apples, pears, strawberries, loquats and quince as well as roses. More specifically, the genus Rubus includes the Blackberry and Raspberry species. All Rubus species can be termed brambles. The word 'bramble' comes from the proto-Germanic root bræmaz meaning prickly, in reference to the spikiness of uncultivated varieties. Commonly blackberries are classed as Rubus Fruticosus agg. The 'agg.' means 'aggregate' as there are many species of blackberry with mostly minor differences separating them, that can effectively be treated as one type.

The Smallest Bunch of Grapes in the World

If you have never seen a blackberry the above heading might help. Each blackberry consists of a cluster of smaller globular fruits, known as drupelets, around a fibrous central core called the receptacle. Each drupelet develops from a pistil, the whole berry resulting from the coalescence of the numerous pistils each bramble flower has. Typically, when ripe, a berry is roughly the size of a thimble. Each drupelet contains a small seed, so each berry has quite a number of seeds cunningly sized to lodge between your teeth. The chief difference2 between raspberries and blackberries is that raspberries leave the receptacle on the plant when the fruit is picked. This tends to make whole blackberries a better source of fibre than raspberries.

The blackberry is unusual in that unlike most other berries it frequently exists simultaneously on the bramble at all stages of development - from flowers to mouldy husks. Initially when a berry forms, the berries are small and green; as they ripen they turn a pinky red similar to a raspberry, becoming a glossy black when ripe, fading to a dustier blue purple when overripe, before turning rusty brown and finally growing mouldy, shrivelled and grey. It is not uncommon for drupelets within a single berry to be at slightly different stages of ripeness.

Brambling, as picking wild blackberries is known by some, differs from picking cultivated fruits because wild brambles (from now on ignore the fact that raspberries are also brambles) both provide free food with no commitment for long-term nurture of the bush and offer the challenge of defeating the bramble's spiky defences. Cultivated blackberries and hybrids such as loganberries, tayberries and boysenberries do exist, and can often come in thornless varieties. Wild brambles flourish as an invasive weed, with menacing thorny shoots often forming bushy clumps. It is this difficulty of gaining a prize against the dangers of mild injury that can make brambling such a rewarding pastime.

It should be noted that as well as being a potentially dangerous location for picking, the berries found on the verges of busy roads may contain traces of vehicle pollution. Some researchers have also noted that in at least some parts of Australia and New Zealand councils had poisoned the brambles to prevent them encroaching further, and again the berries picked from sprayed bushes could be harmful.

As mentioned above the bramble thorns3 create a challenging berry-picking environment and it is unlikely that the prolific picker will not get scratched or have small thorns embedded in fingertips in the pursuit of enticing glossy plump black fruits. Some pickers carry a large stick (which can both be used to push thorny branches aside and also to pull fruiting branches within reach) or adopt protective gear to reduce this risk. While gloves, such as leather gauntlets, work well at defeating thorns, this increase in protection must be weighed against the reduction in finesse that bare fingers possess in picking the berry without dropping or squashing it. One compromise would be to wear just one glove, which can be used to remove thorny branches, allowing a bare hand in to pick berries. Another hand-made solution is to cut the ends from a large plastic drinks bottle4 and use the remaining tube as a partial gauntlet between wrist and elbow.

The berries fruiting on a bramble are often at varying stages of ripeness. It is pointless picking them unripe (as the flavour will be acid not sweet, the texture hard, and they are difficult to detach from the stem) or too ripe (as they are likely to disintegrate into juice over your fingers as you try to pick them, and for makers of bramble jelly they apparently contain little pectin5). With a little experience it is possible to tell by the firmness of the berry picked how sweet it should be, and enjoy the berries as you pick them. Firmer berries are often more acidic than the riper squishier ones. The ripest squishiest berries while not best for bramble jelly are very enjoyable served with whipped cream and shortbread.

Another aspect to deciding whether to pick a particular fruit is whether it is already in the process of being eaten. Some berries can be part-eaten by birds or small mammals, but others fall victim to bugs. This is more common in woodland bramble patches than in more exposed bushes or hedges. It is not pleasant to see a maggot wriggling among your berries, and frequently other detritus injudiciously dropped into your basket can include spiders, or other creepy crawlies. This can be rectified back at home, but it is best to avoid at the picking stage if possible, though some would argue it is valuable to include this usually harmless protein.

If picking more than a handful of berries it is worthwhile to think in advance about how you can transport them. Plastic lunchboxes are good, plastic carrier bags not so effective. The drawback to bags is that the berries are likely to get squashed and ooze juice which will drip out of the bag and stain your trousers6. Hats have been suggested as containers, but the staining properties of the ripe berries should not be ignored.

As another hand-made impromptu solution, a newspaper cone has been found to be effective. To make a newspaper cone take a large sheet of paper (broadsheet rather than tabloid for a decent volume), fold in half vertically, then again horizontally, and finally once more diagonally from the centre of the page to the edge. Hold the folded sheet with the point at the bottom and open three layers at the top. One layer is too thin and prone to bursting, two or four layers likely to fall apart. It is not elegant or foolproof (if the berries are too juicy the paper is prone to disintegrate), but it can do the job of holding a pound of blackberries fairly safely.

Preparing The Berries For Cooking or Eating

It is sensible to wash the blackberries collected. Some believe that this dilutes the flavour of the berries. One advantage of submerging them with water is that it delays the fruit going mouldy, which can sometimes start happening within a few hours of being picked. The easiest way to do this, without increasing the risk of damaging them too much, is by putting them into a colander in a large bowl and filling this with water. A gentle swirling around, then lift out the colander to drain, tip out the water from the bowl, which will have been coloured purple and contain numerous short hairlike fibres from the berries, and repeat.

If there is the chance of maggots remaining within the mass of fruit these can be encouraged to desert the berries by filling the bowl with water again, then sprinkling with table salt and leaving for a few hours (or overnight). After having done this, give the berries a couple more rinses with clean water, which will remove excess traces of salt. All you really want is blackberries, no stalks, no bugs, no accidentally included mouldy or unripe berries. The exception to this is if you are making bramble jelly, when allowing some of the redder unripe berries to the mix will improve the set of the jelly due to their higher pectin content.

Blackberries can be easily frozen and used months later. See the end of the bramble jelly entry for more details, and some other uses for blackberries.

Other Uses of Brambles

There are other things one can do with brambles, such as boiling bramble leaves with lye to make a black hair dye for those who don't want to be blonde, or using the bramble as an alleged cure for various ailments from hernias to dysentery, but eating the fruit simply for pleasure is probably the most common.

The hernia cure is an unlikely folk-remedy that was apparently once common in the Southwest of England whereby the sufferer was passed back and forth beneath a natural bramble loop. These loops are formed by a long barren7 shoot which has arched out of a bush, curved back to the ground and rooted its end in the soil.

More practical is the use of leaves and roots (which are high in tannin, a noted astringent8) boiled up to make a tea, as a remedy for diarrhoea. The berries themselves also have astringent properties to a lesser extent.

1Blackberries can be ripe for picking between the end of July and the start of November in the UK, depending on the weather.2The colour is not the difference as there is a species of black raspberries: R. occidentalis, also known as the Virginian Raspberry.3No obvious etymological connection with the missing letter of the English Alphabet.4A two-litre bottle is sufficient for an adult forearm.5Pectin content of fruit affects how easily a jam will set.6This at least was the experience of one Researcher.7Non fruit-bearing.8Astringents constrict tissues in the body, and can be used to prevent the flow of blood or other secretions.