The Humble Thimble Content from the guide to life, the universe and everything 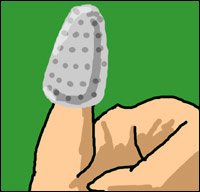 'A thimble is a protective shield worn on a finger or thumb' is one dictionary's definition. However, there is more to the humble thimble than that.

The original use of what we now know as a thimble was to aid and protect the sewer's finger when pushing needles (which were not as smooth and sharp as they are today) through tough fabric and leather. These early thimbles were made of whatever materials were available, such as bone, leather, ivory or horn. It was not unusual for them to have no top, with the sides being used to push the needle through.

The earliest known 'purpose-made' thimbles were made of bronze and were found at Pompeii. They date as far back as AD79.

Today, they can be made of various materials including metal and leather. The more decorative ones are made of porcelain, china, silver, gold, glass, tortoiseshell and mother-of-pearl. These are designed for decoration rather than practical use.

Rubber thimbles are a similar bell-shape, and have pimples on them for gripping. They are used to aid the counting of large amounts of paper work.

The Making of China Thimbles

Most of the thimbles which are collected by enthusiasts are made of bone china. Many of these are produced by a process known as slip-casting, in which every stage is carried out by hand and no mechanisation is used.

Clay, known in its solid state as cake clay, arrives at the factory in slab form. It is placed in a large mixer known as a blunger, with a solution of water and silica mixed to a precise recipe. The clay is broken down until it is liquid, known as slip form, and when at the correct consistency is poured into a bucket.

The slip is then taken to casting benches and poured into moulds which are made from plaster of Paris; these form the basic thimble shape. As it is absorbent, the plaster of Paris soaks up the slip and a shell is formed. The surplus slip is poured back into the slip bucket. The thimbles are left to dry. The thickness of the thimbles is controlled by the amount of time the slip is left in the mould; the shorter the time, the finer the finished thimble will be.

When the thimbles are removed from the moulds they are fragile, larger than the finished thimble will be, and rough around the edges. This is what is known as being in 'green' state. Workers called spongers wipe them until they are smooth and ready for firing. Any rejects are returned to the slip bucket and reused.

The spongers place the now smooth thimbles on batts which incorporate specially designed formers to retain the thimble shape during firing; they are then carefully placed in kilns for the biscuit-firing.

The biscuit-firing takes about eight hours in temperatures in excess of 1,200°C. When this is completed the thimbles are white and translucent, but still rough to the touch. The next step is the dipping in glaze, and the removal of any surplus solution, to prevent sticking when placed in the next kiln, the glost kiln for its second firing.

It takes a total of four separate firings to produce the tiny delicate thimble, which is now ready to be gilded and transfer-printed.

Engish porcelain thimbles were first manuafactured in the early 1800s by well known companies such as Royal Worcester and Wedgwood, their most prosperous time being 1885 - 1910. This was when thimble production was at its height.

Artist William Powell was commissioned to hand paint and sign a set of British birds to adorn Royal Worcester thimbles in 1900.

Thimble collectors are known as digitabulists.

It was the souvenir thimbles to commemorate The Great Exhibition at Paxton's Crystal Palace in London’s Hyde Park in 1851, which triggered a boom in thimble collecting.

In the 19th Century the thimble was considered an ideal small gift, particularly from a gentleman to a lady.

The production of thimbles is geared towards the collector, these are usually made of bone china; specially commissioned thimbles are produced often as Limited Editions, as commemorative or to celebrate various anniversaries and world events; such as the Millennium.

Most seaside resorts and attractions sell decorative thimbles as souvenirs with the name of the resort or attraction imprinted along with a transfer, which is sometimes a local landmark or a cute animal or a flower. Also various thimble collections are produced in sets including animals (both domestic and wild), flowers, boats, trains, signs of the zodiac, months of the year, characters, etc.

Aspreys bought the most valuable thimble on behalf of an anonymous client. They paid the record price of £20,070 for a 16th-Century gold, jewelled thimble at Phillips' auctioneers (London, UK) on 13 December, 1992. The history of the gold jewelled thimble suggests it was a gift from the Mughal Court in India to Queen Elizabeth I who gave it to one of her ladies-in-waiting.

Commercial thimble displays are available and vary in size and shape. There are two basic designs. One is enclosed with 'cubby-holes', which the thimbles fit into. These are often oblong-shaped; some of the smaller ones are in the shape of a house. The other is more open, and has small evenly-spaced prongs, which the thimbles are placed over. These have more varied shapes, including the shape of a map. It is possible to use other items for displaying thimbles in. For example, some chocolate manufacturers sell their products in expensive-looking and interestingly-shaped plastic boxes. Once the chocolates have been consumed, pyramid-shaped boxes can make nice displays for small collectables such as thimbles and Wade Whimsies.

In 1937 Parker Brothers, the producers of the Monopoly board game, introduced a set of die-cast metal playing pieces reminiscent of household objects: an iron, a handbag, a lantern, a car, a thimble, a shoe, a top hat, and a rocking horse. Several of these pieces have been substituted over the years, and unfortunately the thimble is now no longer part of the set.