Wade Whimsies Content from the guide to life, the universe and everything 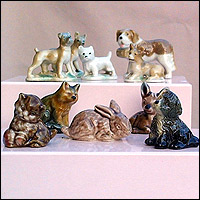 Whimsies are collectable miniature glazed ceramic animals. They were the idea of Sir George Wade1 and were originally intended as 'pocket money toys'. The first Whimsies were available at the British Industries Fair in 1954. They attracted the attention of adults and soon became collectable.

The Whimsies were produced and sold in boxed sets, usually containing five miniatures, a different colour of box representing each set. Each was produced for limited amount of time, usually from one to two years, although some models were made just for a few months, so as not to flood the market and cause the models to lose their appeal.

The models produced from 1954-1961 are known as the First Whimsies. Ten sets were produced during that time, nine sets of five miniatures, and one set of four. The very first set of Whimsies were:

The boxes for First Whimsies were designed to be attractive and appealing. First Whimsies complete with original boxes can be worth up to 50 per cent more to collectors. In the 1970s, the individual boxes were less attractive, though still have different background colours to represent different sets, and each box had an identifying number. By the 1980s the box had reverted back to appealing design.

From the early 1960s, a new method of production was introduced. The base was rubbed back and forth on a material similar to emery paper, giving Wade models their distinctive ribbed base. This serves as a reliable way of identifying post-1960 models.

These miniature animals were an ideal size for Christmas and party crackers. Ten models were produced exclusively for a company which manufactured crackers. The design rights were held by the cracker company for two years, then handed back to Wade.

A Californian company had 24 English Whimsies exported in the mid 1970s. These models were packaged on a brightly coloured bubble card, with the words 'Whimsies Miniature Collection - Solid English Porcelain'. They also had both the American and the Union Jack flag printed on the card. The issue number on these cards are different from the boxed English Whimsies even though they were exactly the same.

In 1971, 25 of the original Wade Miniatures made for commercial promotions were re-issued, and given the name English Whimsies these were packaged in individual boxes for retail. Still produced in sets usually of five per set, with a different background colour on the box for each set and each model had it's own identifying number. At 50p each these cute animals were easily affordable and popular. A new set was released each year, though two sets were issued in 1972 and 1979. Adding 35 to the original 25 a total of 60, this amount does not include promotional models, which were not produced for retail. (The final total being over 100) The first set of English Whimsies were:

Either by accident or design a very small amount of Whimsies have two versions. Examples are the kitten, with either a pink or a red ball of wool. The rabbit was produced with both open or closed ears. The hippo and the bison were each manufactured in two different sizes, and the stripeless zebra (after glazing the stripes didn't show through) had a brown model made, still stripeless.

The back stamps on Whimsies vary, depending on when and where they were produced. Some have an ink stamp on the base, others are embossed, either on the base or near the base, and some appear to have no back stamp at all. These may have originally had a black and gold label on the base.