Rabbits Content from the guide to life, the universe and everything 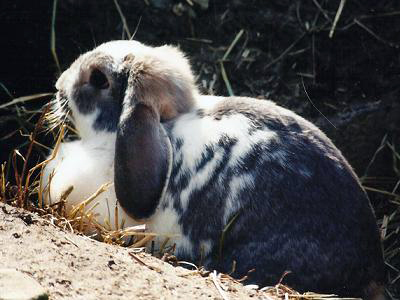 Rabbits are mammals. They usually have two long ears and a fluffy tail. They are naturally inquisitive and they love company. They can live from four to 14 years depending on the breed of rabbit and its habitat. They come in a variety of shapes and colours as well as a variety of temperaments. They are herbivores. Oh, yes, and some are known to chew up everything in sight! Gestation is usually about a month and a litter can consist of anything up to 12 babies - hence the term 'to breed like rabbits'!

Rabbits seem to be a popular animal to choose when entertaining children. There was Beatrix Potter's famous creation, Peter Rabbit, as well as Uncle Remus's Brer Rabbit. This trend has continued with Warner Brothers' Bugs Bunny and various other characters. These rabbits, however, tend to be much better dressed than their real life equivalents.

In the wild, rabbits live in warrens which are deep burrows that snake underground. Their natural predators include foxes and birds of prey. Another main predator is man. Many people shoot rabbits because they are seen as pests. Rabbits love to eat, among other things, heather, which makes them disliked by many avid gardeners.

Another factor that reduces the rabbit population is disease. Myxomatosis is a viral disease that affects the skin of rabbits. At the moment there is no cure for it, however there is a vaccine. In the 1950s the virus was deliberately introduced into Australia where the rabbit population was a big problem. By accident the virus came to the UK and was deliberately spread so that the wild rabbit population decreased drastically. The rabbits then became slightly more resistant to the disease and the population started to increase again. However, myxomatosis appears to be on the increase in certain areas in the UK, along with another disease called Viral Haemorrhagic Disease (VHD).

VHD is also highly contagious and affects adult rabbits. It is mainly transmitted from rabbit to rabbit and it's usually fatal. However, there does exist a vaccination for this disease.

For many years rabbits have been considered ideal pets for young children. This opinion is now starting to change. It is true that the dwarf breeds of rabbits are the right size for young children. However, they are much more powerful than young children and can create a lot of damage. Rabbits are also independent creatures. They may come to be stroked but will probably be unwilling to be handled constantly. The docile bunny rabbit that will be held by a child with no signs of irritation is the unusual scenario rather than the norm.

Rabbits need a lot of space and so a run should always be provided to allow the rabbits a chance to exercise during the day. A run is also an extra source of food if it can be placed on grass. In the wild rabbits are naturally clean animals and do not like to defecate where they sleep so a separate area should be provided for this purpose. No enclosure can ever be perfect, but it should be as large as possible, as safe as possible and as interesting as possible.

Most of the rabbits familiar to the Researcher of this entry love to gnaw at wood. Many different varieties of wood can be used but an easy option is to place fruit tree branches in the run. This not only provides some interest but keeps claws and teeth the right length.

Some rabbits are kept as 'house rabbits' which means that they are kept inside the house for most of the time. Rabbits naturally like to keep their homes clean and so can be trained easily to use a litter tray. It helps to have the animal neutered as this will reduce territorial marking. All cables should have special plastic coating on that rabbits cannot chew through.

Unless you are an experienced rabbit owner, if your rabbit's teeth or claws do become too long, you should take your pet to the vet to have them trimmed. It is also advisable to have both VHD immunisation and the myxomatosis vaccine done yearly if there is even the remotest possibility of your rabbit coming into contact with wild rabbits. Some boarding kennels may actually have this as a prerequisite.

Rabbits should always have company. Some people keep a rabbit with a guinea pig. This is generally not a good idea as often the rabbit will bully the guinea pig. Even if the two animals get on well, a rabbit has incredibly powerful back feet and if the guinea pig is accidentally kicked it may be badly injured.

Finally, the rabbit can be a very rewarding and loving pet when cared for properly. If you have any further questions about keeping a rabbit you should consult your vet, or the various rabbit books that can be bought in pet shops and book stores.