British Mammals - Lagomorphs Content from the guide to life, the universe and everything 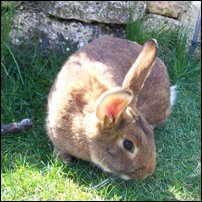 This Order is only represented by three species in the UK, all of which belong to the family Leporidae. They are the rabbits and hares, and they are found all over the British Isles. Distinguishable by their long ears and powerful hind limbs, they are vegetarians with powerful incisors, and this attribute allows them to strip bark off trees when other food sources are unavailable. This, and the damage they can cause to crops, has made lagomorphs the enemy of foresters and farmers – to the extent where a disease was actually introduced to a native species population in an effort to control it.

Rabbits have been both friend and foe of man for centuries. Friends because they have provided an excellent source of food, particularly for workers in remote places such as Dartmoor or the Scottish Islands1; foes for their habit of causing damage to crops and trees. They tend to prefer farmland, as although they are proficient diggers of their underground burrows they prefer to do so where the ground is soft. Of course, cultivated land provides an easy food source as well, so we cannot really blame rabbits for taking advantage of it. Rabbits will also readily colonise woods, dune areas and hill country; in open ground they will dig their burrows undercover if possible.

Rabbits were not originally native to the UK, but were brought from the Mediterranean in the 12th Century. They were originally kept for food and fur, as they are rapid breeders - ovulation in the female is actually triggered by mating, which makes for a high success rate. When wild populations began to rocket in the early 20th Century, with increasing crop damage, a solution began to be sought.

The answer came in the form of a particularly hideous disease first seen in laboratory rabbits in Uruguay in 1896. Myxomatosis takes up to a fortnight to kill, blinding the victim, causing buboes over the body and swelling the creature's head and genitals. Experiments were followed by trials, and once it had been established that the virus would be a useful population control tool, it was released first in Australia in 1951 and then in France. In autumn 1953, either deliberately or naturally, it found its way to Kent; there remain suspicions that the Government had given its blessing.

The Ministry of Agriculture quickly realised that they would be unable (some say unwilling) to stop the virus, and within a few years 99% of Britain's rabbits were dead. The few survivors developed natural resistance, and the population has now recovered to about half of its 1950 population, but it was a close thing for poor Oryctolagus cuniculus in the UK.

Larger than the rabbit, the brown hare is the more common of the two species of the genus Lepus that are found in the UK. It is found everywhere in the country, although it is generally sparse in the West Country and the far south-west of Wales. It is usually a solitary creature, resting by day in a 'form' (a shallow depression, usually under cover of a rock or tree). Hares do not burrow, but their forms are often close together, and if one is disturbed during the day hares in nearby forms will often flee as well! They are most active at dawn and dusk, and this is generally the best time to see them. Distinguishing them from rabbits is quite easy; their ears have black tips and they look an altogether more wiry mammal. When disturbed, their stride is a good two to two and-a-half metres long – the most a rabbit can manage is a relatively paltry metre – and a brown hare in full flight is quite a sight. Hares can reach speeds of up to 20mph over short distances, but the real feat in avoiding predators is their ability to change direction very quickly.

Hares have often been associated with madness in the month of March; the phrases 'mad as a March hare' and 'hare-brained' both come from the excitable behaviour hares supposedly exhibit in the month. They can often be seen leaping into the air and 'boxing' but - sadly for the expression and the English language - hares actually do this throughout the breeding season, between February and September.

Above around 600m altitude (lower in Scotland), populations of brown hare and rabbit are not found, and here the mountain hare takes over the ecological niche. Mountain hares can be distinguished in the winter as their fur changes from a shimmering brown (blueish in the right light) to white, giving it excellent camouflage above the snowline. It is believed that it is this relative invisibility that makes the mountain hare confident enough to be very inquisitive, and it has been known even to approach humans on occasion. Mountain hares are solitary creatures, only pairing up during mating season. They live in a 'scrape', a small burrow scraped out of a rocky corner, or in a niche under boulders.

1Many places still have the name 'warren' as a suffix, so important were the rabbits.2Or Lepus europaeus.