British Mammals - Insectivores Content from the guide to life, the universe and everything 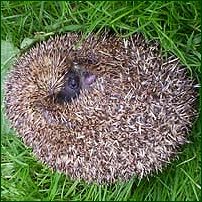 Three families of the order Insectivora are represented in the British Isles. Two are represented by just one species each; the Erinaceidae, or hedgehogs, and the Talpidae, or moles. Meanwhile, there are four species of the shrew family, Soricidae, present in Britain, one of which is found only in the Scilly Isles.

The insectivores are a very interesting order indeed. Some species are very highly specialised, such as the mole, which has adapted to become extremely proficient in living underground; whereas the shrews are simple, small furry creatures who feed on insects almost by default! They are found all over the UK and thrive in every habitat except Britain's uplands.

One of Britain's most well-known mammals, the European hedgehog Erinaceus europaeus is found all over the country, only becoming scarce in the Scottish Highlands. It is easily identified by the long spines on its back (these are actually well-adapted hairs), which the creature uses for defence when alarmed or threatened – it rolls up into a spiky ball which aggressors find it difficult to find a way through! People have often found a way through, by simply rolling the hedgehog in claying mud and baking the whole thing in an oven, which is presumably a rather unpleasant end. It was long-thought that foxes would urinate on hedgehogs to make them uncurl, but it is now believed that foxes simply do this on anything they find interesting. Research has not yet discovered if this is more unpleasant than being rolled in mud and baked.

Hedgehogs are nocturnal creatures, also active around dawn and dusk, and can often be heard noisily snuffling in leaf litter and ditches. They find their food largely by hearing and smell, as their eyesight is poor, and their diet consists chiefly of invertebrates. Surprisingly, they have also been found to have fed on small mammals such as baby mice and voles, small birds' eggs and even reptiles and amphibians – it is not uncommon for a hedgehog to feast on adders!

You can find evidence of hedgehog visits from tracks on soft ground, their prints looking very much like small hands, around 3cm long, and often with a short trail made by the claws as they lift their feet. Their black droppings are cigar-shaped, around 1cm in circumference and a few centimetres long, and are very crumbly as they consist mainly of inedible parts of insects. They nest in a ball of grass and leaves, usually well under cover and occasionally in old burrows, and sadly frequently try to hibernate in bonfire piles, with tragic consequences. Putting a hedgehog box in a messy corner of your garden will help to avoid this fate, and is also a wonderful natural way of keeping the local slug population down!

The European mole Talpa europaea has adapted extremely well to life underground. At a cost to its eyesight (moles are almost, and occasionally completely, blind) it has developed keen hearing and smell, and very sensitive vibrissae1 which allow the slightest vibration in the ground around it to be detected. Its forearms in particular are also highly developed, with powerful, paddle-shaped hands able to easily dig out the tunnels in which it lives; these also make it a great swimmer. The fur is designed to move in both directions to allow the mole to move easily backwards as well as forwards; in most mammals, the fur lies very definitely in one direction.

Moles lead a solitary existence, with each individual occupying its own tunnel system. Females occupy a system around 10m in range, with male systems being a little larger at 15m, and they will defend their territory with surprising aggression. Sometimes networks will overlap, but both parties are very clear about where their territory ends and the next mole's begins. They will nest in one large chamber known as the fortress, and other tunnels lead off this; these 'secondary' tunnels are effectively large traps for worms and subterranean insects to fall into.

The mounds of earth that are left by moles for the enjoyment of tidy gardeners everywhere are of interest in themselves. Larger mounds indicate a fortress, and the nest itself is often in the mound around surface level. Lines of small piles of earth show where the mole has been digging deeper underground, and a continuous line of disturbed earth shows where moles have been tunnelling at root level for food. Any of these extrusions are readily used by ants for nesting or by rabbits for latrines, and sometimes moles will fill them with injured earthworms to be used as a larder.

Moles are rarely seen above ground, except during the late spring, when youngsters are kicked out of the nest to find their own territories. It is not uncommon for them to carve out a new territory in odd places such as the central reservations of motorways at this time of year.

Four members of the shrew family are found in the British Isles, although one, the lesser white-toothed shrew, is only found on the Scilly Isles (giving rise to its alternative name, the Scilly shrew). They are all notoriously nervous, and it is illegal to handle them without a licence.

Shrews form a key part of the diet of many predators, from owls and other birds of prey, to snakes and foxes. Their remains can often be identified, especially in pellets regurgitated by carnivorous birds, as they have a red tip on their lower jawbones. All are active throughout the day but are mainly nocturnal, and are solitary except during the breeding season.

The common shrew is a swift little creature which is found in just about all habitats, and can be very common locally. Look out for its three-tone fur, from a dark brown on its back to a pale brown underbelly; the borders between the shades are very distinct. It prefers places where there is lots of cover, such as woodland, scrub and hedgerows. Nesting either below the ground or in well-concealed places at the surface, it has an incredible home range of up to 150m and defends its territory fiercely – at the sight of another shrew, a fight is usually unavoidable. They feed on small insects, usually found in leaf litter or long grass, and their droppings are tiny long pellets that crumble to dust when touched.

A good climber, the pygmy shrew is, as its name suggests, a smaller version of the common shrew! It has other distinguishing features; its fur is two-toned rather than three, and its head is clearly dome-shaped. It also has a particularly hairy tail. It will happily live in all habitats, from seashores to high moors, and utilises burrows made by other creatures.

The largest of Britain's shrews, the water shrew usually lives in an excavated tunnel system along river banks, frequently near watercress beds. It has, however, been found in woodlands two miles from water, and has also been found in mountain streams. Often, the tunnels will be made to a very tight fit, and this is believed to help the shrew dry out after one of its regular excursions into the water! Its cylindrical droppings are usually left on one part of the riverbank in a 'latrine', and this is a great way to find out if water shrews are about.

Not only are these shrews only found on the Scilly Isles, they are also the only type of shrew to occur there! Unlike all the other British species, the shrew does not have a red tip to its lower incisor, hence its name, and it is a sub-species of a white-toothed shrew that is common from Iberia to Japan and north Africa. The subspecies is only found2 in Scilly, making it Britain's least widely-distributed mammal.

1Hairs found around the snout or brow of many mammals; for example a cat's whiskers.2Mammalogists refer to this as being 'endemic' to a particular place.