Surveying British Mammals Content from the guide to life, the universe and everything 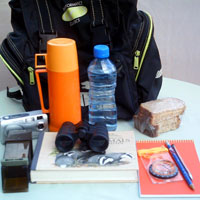 Mammal surveys are a great way to get to know what lives in your local area. Whether in your garden or local nature reserve, a well-planned survey can be great fun, especially if you vary your studies by using a range of techniques.

This Entry will deal only with identifying terrestrial mammals. Cetacean surveying for most people is a case of watching out for them, and taking an identification course is the best way to get involved.

It's always a good idea to send details of your plans in advance to the Mammal Society, who will be able to give you advice on your ideas and suggest further sources of information. They produce some handy reference guides to many of the techniques explained here at a very reasonable cost. If you are planning to study mammals such as dormice or shrews, you'll need to contact them in any case as it is illegal to trap or handle these animals without a licence.

The Mammal Society require four key pieces of information for any record:

Additional information on aspects such as the animal's activity, size, sex and so on are also very useful, but the above are key.

Humane live trapping of mammals is a very effective way to find out what's about. The most commonly-used trap is called the Longworth trap, which is a long aluminium tube with a spring-loaded door at one end. Plastic versions are available more cheaply, but tend to be nibbled through by mammals surprisingly quickly!

The trap is filled with straw to protect the creature from cold and baited with grain and dog food (the dog food is a surprisingly popular food for shrews!) and the door wedged open. Traps are usually left out at dusk to catch nocturnal rodents. The mammal smells the food, wanders in, trips the door and finds it is caught inside, so settles down in the straw for a good nap. The trap must be checked as early as possible the following morning, to reduce the chance of possible suffering. It is placed into a clear plastic bag and the contents carefully removed; it will become clear very quickly if the trapping has been successful! The mammal can be sexed if necessary and returned to the wild.

Of course, handling of mammals shouldn't be done without training. The Mammal Society run a number of courses every year, in which students can have a go at sexing and handling mammals under supervision.

Would-be wildlife detectives will find pellet analysis great fun. Many birds of prey regurgitate inedible parts of their prey into pellets, and these furry bundles contain all kinds of bone fragments. By carefully taking these apart, one can find out what the bird has been eating and therefore what mammals are around locally. Pellet surveys are good for finding rare species which may not be caught in traps as often.

Finding the pellets is often the trickiest part. Barn owls are a popular source, as they always regurgitate their pellets in the same place, so one can normally find a few in the same area. Although tawny owls are more common, they use several favoured spots, so it is more likely to find just one or two.

Once you have your pellet, you'll need to soak it in a tray of water and gently tease it apart with a pair of tweezers. You'll probably find all sorts of tiny bones, but the real goodies are any skulls – these are usually fairly intact, being broken into two or three pieces at most, and from the skull you can identify the species:

These are quite easy to make, and are often used to detect whether small mammals are present in a particular place - especially dormice.

All you need is a piece of plastic plumbing pipe about a foot long and three or four centimetres in diameter. Cut out two shallow sections from the top, either side of the centre, and replace with sticky tape, with the adhesive side facing into the tube. Bait the tube with a blob of peanut butter or jam in the centre, and attach it to a tree or leave it on the ground. Mammals nip in for a nibble and hair gets stuck to the tape!

If you're lucky, after a few days you'll find a mammal has visited. It is quite hard to tell the difference between most species, but some Wildlife Trusts may be able to help. They are most useful for finding out if dormice are about, as their hairs are quite fine and orange.

There are plenty of signs to indicate the presence of particular mammals. Although most of these are better demonstrated by an expert out in the field or by reference to a good field guide, it's worth taking a quick look at some ways of finding out who is, or has been, about. It is quite difficult to tell most mammals apart from traces in the environment. Almost like a great detective assembling clues, with practice, a good pair of eyes and occasionally a good sense of smell, it is possible to tell the difference between them.

Mammal homes vary widely in structure, size and materials. Often it is a case of telling the difference between two possible owners, for example:

Put simply, all mammals poo according to their diet and size - we would not expect a large carnivore like a fox to excrete anything like the size of faeces that a small insectivorous pipistrelle would. This may be obvious, but it's important to actually break up and smell the stool for good identification1.

The size of the creature doing the laying is an obvious consideration, but good pointers can also be taken from the texture. Lots of shiny black spots will indicate an insectivore (bat poo tends to crumble to dust); a mash that must be teased apart, a herbivore. Larger, odorous faeces with a fairly repulsive smell is likely to originate in a mustelid.

Mustelids will also leave the same odour around food remains - the larger the animal, the stronger the smell. Large chunks of wing with a very strong smell could be the work of a fox; a mouse limb with a faint smell that of a weasel. Good clues for small mammals often lie in the way they get into nuts. Dormice will bite cleanly around a circle, almost polishing the cut to get access to the goodies inside, other mice nibble away randomly until they get through, and squirrels will crack the nut with their powerful jaws.

It's sad, but remains are very useful to the mammal surveyor. From beached whales and dolphins, through roadkill and mammals trapped in plastic bottles, all records are useful to surveyors. In some cases, especially in the marine environment, wildlife organisations may wish to analyse the corpse, so it's worth taking measurements and identifying the species as closely as your stomach can handle and contacting your local Biological Records Officer2. Clearly, you should not put yourself in danger while doing this: for example, on a busy road or on the beach at night.

For the beginner, it is far easier to get involved in a pre-existing mammal survey than try to learn the ropes on your own. The Mammal Society frequently organises local and nationwide surveys, as do individual Wildlife Trusts and local bat groups, and you may be lucky enough to find a course near you. It may even be that a local nature reserve has an officer or warden who needs help on a survey.

Mammals are fascinating creatures to study at any level, whether you are following their tracks or learning to handle them properly. Getting involved in a survey rarely disappoints!

1And to wash your hands before eating lunch.2Every county in the UK has one, usually a member of the Wildlife Trust or County Council.