Dartmoor, Devon, UK Content from the guide to life, the universe and everything 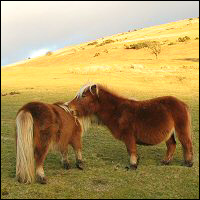 The road in front of us grew bleaker and wilder over huge russet and olive slopes, sprinkled with giant boulders. Now and then we passed a moorland cottage, walled and roofed with stone, with no creeper to break its harsh outline.
- from The Hound of the Baskervilles by Sir Arthur Conan Doyle

Dartmoor is situated in the heart of Devon in south western England. It can be in turns beautiful, bleak, wild, foreboding and inspirational, changing its mood at a whim to confound the unwary traveller.

Situated on a high granite plateau, Dartmoor has been shaped by both nature and man into a landscape so rare the area was designated a National Park in 1951.

It is thought that man first came to Dartmoor about 10,000 years ago. Certainly by 2500 BC Neolithic people were building chambered tombs on the moor. At this time, the area was heavily forested with oak, hazel and elm. Most of this forest was cleared by the early farmers, although a few remnants of it can be seen at Wistmans Wood, Black-a-Tor Copse and Yarner Wood. Gradually the climate changed, rainfall increased and the bogs began to form. Human activity slowed on the moor as its people withdrew to the milder regions at the moor's edge. It is this abandonment of the moor which gives us a unique insight into prehistoric life as many of the granite-built structures have survived until now - Dartmoor has the largest concentration of Bronze Age features in Europe.

Much of Dartmoor's industrial past is visible if you know where to look. Hut circles and enclosures made by the earliest farmers are clearly visible on the hillsides and medieval field systems can be identified by looking for systems of ridges and furrows. Other industries whose remnants are still visible include tin mining, peat extraction, quarrying and even ice production.

The ponies are probably Dartmoor's most famous and oldest inhabitants, thought to have been living on the moor for at least a thousand years. They were used as pack animals by the early tin miners and, as with the sheep and cattle that also wander the moor freely, have become a vital part of the moorland, keeping down the scrub vegetation.

Visitors to the moor are asked not to feed the ponies as it encourages them to go nearer the roads where many are killed and injured by cars each year. Not only that - they may look cute, but they kick and bite.

The Ministry of Defence (MoD)

The MoD use a large proportion of the land on Dartmoor to train troops. There are three live-firing ranges on the north moor. These are clearly shown on all maps as 'danger areas' and on the ground by red and white posts. When live-firing is taking place, red flags (red lights at night) are shown on the surrounding tors1. When these are showing, there is no public access. The ranges are always open to the public at weekends and during the entire month of August; at all other times, check first - the firing schedules are on display in the information centres or you can call a free-phone number - 0800 4584868. Even when there is no live firing, training still takes place, so don't be surprised by the sight of troops and loud bangs - they're only blanks!

The vast majority of Dartmoor's villages are clustered in the sheltered valleys around the moor's edge or on the gentler eastern part. Many are little more than a couple of cottages and a farm but may still be worth a visit.

Dartmoor has some of the best pubs to be found anywhere and, rather than list them all here (an impossible task as they are numerous and everyone has different tastes), an attempt will be made to list common factors.

A look at any map of Dartmoor will show almost no roads and few settlements. Those roads and villages that are present are located on the edges of the moors, and it is here that you will find the pubs. Many are in very small villages or even hamlets, some are almost totally on their own. Many date back centuries.

Most of the pubs are stone floored, have open fires and are small inside but often with large gardens. Some even have camp sites attached to them.

Dartmoor pubs have to serve three totally separate types of customer. Firstly the locals; characteristically the large agricultural worker with a big appetite and a thirst to match. The second are those who come to the moors for walking, riding, kite-flying, alfresco sex or whatever activity takes their fancy. Finally, there are the city folk who just want to get out of town, walk around for a while then go somewhere for a good meal. The presence of the first two types has meant that the pubs don't care too much about customer dress or smell - in many pubs the smell of horse dominates - but they have to provide good quality beers, ciders and wines. They must also offer good quality food for the townies but large portions for the locals and activity tourists as well as keeping prices low to satisfy all concerned. Often pubs will be busiest during the lunch hours, when all three types of customers may be present but almost deserted at night with just a smattering of local customers.

A word of advice; don't complain that the cider is warm and flat, that is how traditional cider should be.

Even though it's estimated that over a third of visitors go to Dartmoor to walk, most people will arrive by car. The main routes to the south west (A30, M5, A38) can become incredibly busy during peak tourist season but, luckily, most of the traffic is heading towards the coastal resorts. Dartmoor can still be very busy during the summer. These tips for driving and motorcycling in Devon will be useful for those little country lanes but it is worth taking extra care on unfenced, open, moorland roads.

Dartmoor has a pretty good transport system, for a rural area, and has many good offers for the visitor. During the summer of 2001 these included 'Sunday Rovers', that entitled individuals or families to travel on many Dartmoor buses and trains on that day and included discounts on many local attractions and guided walks run by the park authority. Full details of current offers can be found on Devon County's transport website, known as Devon Bus.

Other 'Rover' tickets are also available along with details of day-long circular routes (such as Exeter to Ashburton to Tavistock to Okehampton, which effectively circles the moor). Details are, again, available from the Devon Bus website.

Always check times of buses as, although there is a good network of routes, their frequency can be considerably less than urban buses. A missed bus could mean a long wait till the next one.

Dartmoor offers a huge range of walks for different abilities. There are deep, wooded, river valleys, babbling brooks and twisting lanes with high hedges as well as open moorland. There are over 160 granite tors on the moor that have an irresistible lure. A few are within an easy walk (albeit uphill) of a car park and ideal for a picnic, although they can become very crowded in high season. Venture a little further away from the car parks and the extra effort is well rewarded.

Once venturing out onto the open moor, the ability to use a map2 and a compass are essential.

The terrain on the moor can be deceptively hard going. Soft, tussocky ground with rocks hidden by bracken conspire to wear out legs and twist ankles. Keep a look out for bogs - usually these are just soft, wet, mossy areas that aren't any problem with halfway decent footwear but there is also the type that is a mat of floating vegetation over deep water - definitely worth avoiding!

Dartmoor is famous for its changeable weather, so appropriate clothing and footwear are a must. Often a walker can spend a day on the moors in the pouring rain, only to return to base and find it's been glorious sunshine there all day - on the plus side, the opposite can often occur too. Sunny weather can have its drawbacks though, the breeze and cooler air temperature of the high moor make it far easier to get sunburned without realising it. It

A few of the places worth visiting on foot:

Back in 1854, a gentleman tourist left his calling card at the cairn at Cranmere Pool, a remote region of upland bog on the north moor, thus starting the strange pastime of letterboxing on Dartmoor. Those seeking letterboxes on the moors are easy to distinguish from the usual walker or hiker - the letterboxers are the ones looking avidly at the ground! One important point to note - there are no letterboxes within the firing ranges and there are none hidden in anything that looks like a mortar shell. This seems obvious enough but there have been some nasty injuries sustained this way.

Although most visitors to Dartmoor are walkers, there are plenty of other things to do; a good network of bridle paths are ideal for pony-trekking or mountain-biking. Some of the tors and rocks are good for climbing but do check access first. If you are under 20 and fancy seeing more of Dartmoor, there's always the annual Ten Tors Challenge to test your legs, stamina and willpower.