Cider Content from the guide to life, the universe and everything 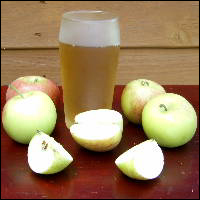 When the weather warms up what can be more refreshing than a nice cold glass of still, sharp, apple flavoured golden cider?

Cider was once the everyday drink of farm workers and rural people in the regions where it was produced. Those regions tended to be places where the grape vine doesn't grow reliably, but the climate is suitable for apple trees - the south of England, the north of France, the Basque country and perhaps other parts of Northern Europe.

Now there is a drink sold in pubs, bars and supermarkets which is called cider but this is the modern, industrialised version which bears little resemblance to the genuine product. Industrialised cider, worldwide, is nearly all produced by just two major manufacturers. It's made out of a limited amount of apple concentrate to which corn syrup or other cheap ingredients are added, to provide a high alcohol long drink, marketed as an alternative to beer and with a nearly neutral taste and lots of fizz. Served out of pressurized kegs in pubs or large plastic bottles in supermarkets and off-licenses, it is clearly aimed at the youth and 'cheap alcohol' markets.

Real cider, on the other hand, is simply made by collecting local apples, pressing them to extract the juice and fermenting it. It tastes of apples, with distinct flavours coming from each variety or mixture used, and subtly different levels of acidity, sharpness, alcohol, etc, with each batch made. Some real cider is then bottled using the methode champenoise1 to make a naturally sparkling drink, for instance in Normandy and Brittany, but the old farm cider was originally served straight from the barrel long after fermentation had ceased, and drunk still. Many cider enthusiasts, still prefer it like this. A pint of real cider doesn't have to be clear either, it can be cloudy and still. What is important is that wonderful fruity sharp natural flavour and a strength of around 5-8% which puts the drink mid-way between beer and wine.

But Where Can you Find Some?

Drive around the rural counties in the west of England (Devon, Dorset, Somerset, Herefordshire and Gloucestershire) and you will occasionally see home made signs at the side of the road saying 'Farm Cider' or 'Scrumpy Here'. You can try some like that - you never know, it might be quite drinkable! There used to be pubs which specialised in selling cider rather than beer, but these are almost extinct now, due to the power of the big breweries. In the UK there are two resources which help us to seek out sources of real cider. One is the website and mailing list at ukcider.co.uk and the other is a book called CAMRA2s Good Cider Guide by David Mathews, (published 2000). In the north of France it is possible to buy good farm-bottled sparkling cider in most supermarkets and grocers; there will often be a range of different estate's products on offer, rather like wine.

The same goes for the Asturias region of Northern Spain, or the Basque Country. In particular, there is an area of 20km radius around San Sebastian, a port town on the Atlantic coast, which boasts hundreds of bars selling bottled natural cider (sidra natural) all year round. Better still are the environs of a village called Astigarraga, 6km inland from San Sebastian. Here are situated the rural cider farms. You can spend an evening at one of them, paying around £15 for a set menu and as much draught natural cider as you can drink. And what a social occasion! The draught cider season there, only lasts however, between 20 January and 20 April.

It wouldn't do to write on this subject without mentioning perry. Although not as well known as cider, the making of perry, the pear equivalent of cider, is so similar that they are like two types of the same drink. The special varieties of pears used give perry its distinctive and subtle taste. Perry pear trees can grow as high as 15 metres, taking perhaps 200 years to do so. Sales of perry have always been small and represent about 5.5% of total cider volumes, indeed when cider was freely distributed to farm workers, nearly all perry was kept back for the farmer and his family. It is a limited market and the supply of perry pears is not plentiful, so if you do see any perry for sale alongside cider it is always wise to buy some because there may not be any left next time.

Cooking with Cider and Perry

Real cider is great for use in cooking; it adds a fruity sharp flavour to sauces in place of white wine, deglazes the pan after browning meat and is traditionally used to make cider gravy to go with roast pork dinners. Whole fish can be poached in cider. There are recipes for cooking gammon in perry, and perry butter, sauce but sadly there is never enough Perry around to try them out.

Of the traditions associated with cider, most notable is the Wassail. Farmers and farm workers used to salute the apple trees in a ceremony known as wassailing. Wassail or Wass Hal means 'be thou of good health'. The time of the wassail varied from Christmas Eve to Twelfth Night. Participants carried jugs of cider into the orchards, drank a health to the trees and the anticipated next year's crop, and poured cider around the tree roots. During the wassailing a great deal of noise was created by banging pots and pans. Wheat flour cakes were eaten at these ceremonies and small pieces of the cake were dipped in cider and placed in the forks of the trees as a thanksgiving to the spirit of the tree.

A Guide to Supermarket Cider

Due to the difficulty of finding real cider you may be tempted to put up with something inferior from your local supermarket, only to be faced with a bewildering choice. So here are some guidelines for the discerning cider buyer arranged in descending order of preference:

1This is a special method mainly used for making sparkling wine. It may have been invented by cider makers in the Forest of Dean.2CAMRA stands for the Campaign for Real Ale.