Devon, UK Content from the guide to life, the universe and everything 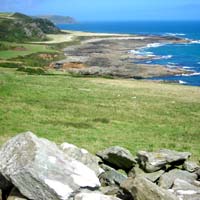 Devon is the best county in England by a thumping great margin. There can be no quibbling or appeal.
- Country Life's Best County Guide.

Waterloo commuters know Exeter as the end of the line on the region's longest run. John Cleese made Devon's resort hotels infamous in the classic TV series 'Fawlty Towers'. Enid Blyton's Famous Five are among many consumers of Devon cream teas. Other counties may also boast of distance, recreation and rich food, but Devonians, and thousands of annual tourists, will testify to the fact that Devon is a distinctive county. Devon's size contributes to this - only Yorkshire and Lincolnshire are larger. Its size is only partly defined by human boundaries, as it is bordered by the sea to both north and south, never more than 40km away. Within this large area, landscape and human activity vary considerably.

The image of this county, nestled away in the south-west of England, is frequently a quaint one; of cream teas, strange accents, red-nosed cider drinkers, narrow country lanes full of livestock and a generally backward and old-fashioned view of life. h2g2's previous Entry on the county gave a wonderfully jaundiced view of it:

Many unsuspecting travellers, of an 'intermediate' age, enter the boundaries of this fair county in south west England only to then lose themselves amongst tearooms and craft shops of which there are many. It is then that they find they have aged inexplicably and are now due for retirement - and decide to stay.

Certainly, if you want a fast-paced, congested way of life, with as much pollution as you can get into your lungs and a general disregard for your neighbour, stay away. But for good conversation in the pub, natural beauty, a vibrant history and the bare minimum of stress, step inside. This is a county where strangers will tell you they belong. This is Devon.

Devon is bordered by Somerset and Dorset to the east, and Cornwall to the west. The south coast belongs to the English Channel, and to the north Wales is sometimes visible across the Bristol Channel, which has the world's second highest tidal range. Its main rivers are the Exe, Dart, Teign and Tamar, which run into the English Channel, and the Taw and Torridge running north into Barnstaple (or Bideford) Bay.

The latest population estimates put Devon's population as 1,102,000, in an area of 670,343 hectares. Almost half a million of these people live in the urban areas of Plymouth, Exeter and Torbay. The remaining 55% of the population share just over 650,000 hectares - that's 1.32 hectares each!

Though productivity in the county is growing, the Office of National Statistics estimated in April 2005 that Gross Domestic Product per head is £9,636 in Devon1. Although employment levels are high at 81% of the working age population, in 2001 a survey showed that earnings are almost a fifth lower than in the rest of the UK. While Average Joe UK earns around £444 a week, his cousin in Devon makes do with £360.

The name of the country is generally held to come from the Celtic Dyfneint, meaning 'deep valley dwellers'. Being so remote from early population centres, Devon, like Cornwall, retained a very separate, Celtic-influenced identity until relatively recently. The Romans barely entered the county, apart from establishing a garrison and town at Exeter. There is evidence that there was a battle between the Romans and the Dumnonii, and after this there was probably a truce that allowed some measure of co-existence. This explains a smattering of small Roman remains in both Devon and Cornwall2.

Even the Anglo-Saxons didn't claim Devon as part of their kingdom until 805 AD - and even then, their word for the local population was Wealcynn, or 'foreigner'. When the Normans conquered Britain, they compiled the Domesday Book, which named several places in the county, and they began to rein in the local populace. Castles like Totnes Castle were built, though more for effect than defence, and Dartmoor was claimed as a hunting ground for the monarchs. As time went on, more and more of the countryside was given over to the gentry as rewards for loyalty.

By the 16th Century, the county was beginning to gain some sense of importance. Coastal ports, notably Bideford, Barnstaple and Plymouth, were becoming regionally important trading centres, and Exeter was emerging as an important regional centre. Tin was being mined on Dartmoor and became so important that there was even a local 'Stannary Parliament', which met quarterly to lay down the law to the tinners.

Plymouth was the starting place for the Pilgrim Fathers' voyage to America in the Mayflower, and was also where Sir Francis Drake played his famous game of bowls before defeating the Spanish Armada.

However the county's remoteness from major population centres meant that it would always be something of a backwater. It was only in the mid-19th Century, when the Industrial Revolution created the concept of leisure time for the first nouveau riche, that the county's qualities began to be recognised. Dartmoor, thanks to its brooding prison and the influence of atmospheric writers like Sir Arthur Conan Doyle, began to attract crowds, as did resorts like Torbay on the coast. The therapeutic qualities of sea bathing proved extremely popular with Victorians, and the county has been a popular tourist destination ever since.

Devon has always been seen as something of a cultural backwater. For classic literature, look elsewhere (Arthur Conan Doyle's Hound of the Baskervilles3 and RD Blackmore's Lorna Doone being notable exceptions); there are few great composers from this part of the world; the great artists never visited, and the best athletes and sportsmen were born in other parts of the world.

What there is reflects well on the county. A quiet, unassuming place, its modest achievements are reflected in the land that lies around.

Probably the most famous song ever written in Devon is the Christian hymn 'Abide With Me', known as the most popular Christian hymn and sung every year at football's FA Cup Final and composed in Brixham by Henry Francis Lyte. Lyte was the minister of All Saints church in the town, and completed the song on the day he gave his last sermon in the parish church in 1847. The final verse is particularly poignant; Lyte knew it would be his last service and died of tuberculosis in Nice, France three weeks later:

Hold Thou Thy cross before my closing eyes;
Shine through the gloom and point me to the skies;
Heaven's morning breaks, and earth's vain shadows flee;
In life, in death, O Lord, abide with me.

A folk tradition is also alive and well, boosted by Sidmouth's annual International Folk Festival and local events such as the Dartmoor festival in South Zeal. Devon-based folk musicians worth checking out include the 2004 BBC Radio 2 Folk Award winners for best live act Show of Hands and rising star and Mercury award nominee Seth Lakeman.

The county boasts three professional football clubs, none of whom have ever won any major honours. They are Plymouth Argyle (whose history is also the subject of a h2g2 page), Torquay United and Exeter City.

Likewise, the county cricket team has never been successful nationally, but is one of the better Minor Counties sides.

Famous sportsmen and women who made their name in the county include tennis player Sue Barker, footballer Lee Sharpe, England cricketer Chris Read and the infamous bowls player Cliff Starkey, about whom the film Blackball was made.

For The Visitor To Know

The transport infrastructure isn't all that great around these 'ere parts. Away from the main towns, buses are infrequent, many parts of Dartmoor being served by just one bus a week. Direct train services, apart from along the Plymouth-Exeter mainline, are few, and when they are found they invariably wind along at a very slow pace. Drivers in Devon will find the motorway runs out at Exeter, and apart from a few key A-roads most of the driving is along single lane or single track roads. Adding 50% onto your expected travelling time is not unreasonable for most journeys. Motorcyclists will be delighted to find there is a separate Entry on Motorbiking in Devon.

Devon locals occasionally use the expression 'dreckly' (ie. 'directly', said with a Devon accent), which is like 'mañana' only without the sense of urgency. If a Devon car mechanic says he'll pop over to take a look at your car dreckly, expect him to arrive at some point next month.

There are a number of towns and villages on the edge of Dartmoor, particularly to the north, where it is claimed that 'the Devil died of cold'. This is due to the abnormal amount of rain that gets dropped and mist that gets caught around the edge of Dartmoor. Don't let this put you off holidaying in Devon. Jump in the car and drive a couple of miles to find those huge blue skies.

There are more Bronze Age remains on Dartmoor, per square mile, than anywhere else in Europe.

I always say to friends, 'I don't live 250 miles from London. I live 25 years from London'.
- TV presenter and Devon resident Noel Edmonds.

1The UK average is £12,548.2See also the Dewnans Celtic Devon website.3There is a snack van parked near Hound Tor on Dartmoor all summer called The Hound Of The Basket Meals.