Muse - the Band Content from the guide to life, the universe and everything 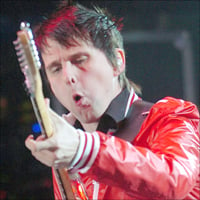 Best, you've got to be the best
You've got to change the world
And use this chance to be heard
– 'Butterflies & Hurricanes', 2003

In 1995 Dennis Smith, record agent and owner of Sawmills recording studio, discovered a more-or-less unknown band playing covers in a small Cornish village1. At the time of writing, Muse have released five studio albums and gained several top 20 hits in the UK charts. Though at first thought to be copying the well-known style of Radiohead, Muse have shown that they have a talent for producing unique pieces. The band consists of vocalist/guitarist/pianist Matt Bellamy, bassist Chris Wolstenholme and drummer Dominic Howard.

The band was originally formed under the name Rocket Baby Dolls for a local 'Battle of the Bands' competition2. The three were in fact the only ones playing what they described as 'real rock', and so Matt, Chris and Dominic went on stage expecting to lose. They played aggressively and broke everything on the stage, but to their amazement won the competition. Looking back, Matt thinks that this experience changed the way they thought about music:

And we had just realised at this time that we could replace lots of things. We realised that emotion, the vibrations that you create, are as important as your technical skills. We had just discovered something: music is a matter of emotion.

For this reason, the band was renamed Muse, and started to play gigs in various small venues. During their time as amateurs, the band held down various jobs, ranging from caravan cleaning to factory work. However, they did not enjoy playing covers of other people's songs, and the number of gigs available started to decline. Luckily enough, Muse were discovered in 1995 by Dennis Smith, owner of Sawmills recording studios in Cornwall, and in 1997 he started to offer them free time in a recording studio.

Muse were signed up by Smith's newly-created Taste Media and recorded the Muse EP3 in 1998. The EP consisted of four tracks and only a thousand copies were made, being released on the Dangerous label. Shortly afterwards the band performed in several locations in the USA, and gained enough interest to be signed by Maverick4 on Christmas Eve that year. Another limited edition EP was released, this one featuring six tracks, including 'Muscle Museum', 'Sober', 'Unintended' and 'Uno', the last of which was then released as a single in October 1999.

'Uno' made it into the top 75 in the UK charts, and the next single, 'Cave', was equally successful. Encouraged by these results, Muse released their first album, Showbiz, which was produced by John Leckie, the man responsible for Radiohead's The Bends album. The album was hugely successful, selling over 700,000 copies, despite the band being described as Radiohead copycats. The band released several more singles in 2000, with 'Unintended' being the first to reach the top 40 in the UK charts. They also decided to aim for an international audience, with releases in France, Japan and the USA. The year ended with Muse being nominated for Best New Act at the Brit Awards, but they didn't win.

Origin of Symmetry and Hullabaloo

In 2001 Muse produced their next album, Origin of Symmetry, with the help of John Leckie and Dave Botril, another record producer. The first single to be released from the album, 'Plug In Baby', reached number 11 in the UK charts, and 'New Born' also reached the top 20. The album was released soon afterwards, and although it was met with some criticism, the band were heading increasingly upwards. Muse were nominated for three 'Q awards' – Best Album, Best Live Act and Best Producer. Once again they didn't actually win anything, but the year had generally been a success.

In 2002, Muse went on a large promotion tour around the world, with their concert at the French state-owned concert hall Le Zénith in Paris being recorded for the production of a music video and CD/DVD collection called Hullabaloo. The year ended with Muse winning the Kerrang 'Best Live Band' award, having played over sixty gigs that year, and selling 1.3 million copies5.

Soon after recording began for Muse's next album, Absolution, war broke out in the Gulf as the USA and UK invaded Iraq. Matt Bellamy had been trying to create an uplifting sound with the help of an orchestra and almost a hundred backing parts. The war began after a couple of tracks had been recorded, and the feelings evoked by the effects of the war prompted Matt to re-record the tracks, giving them a much harder sound. The album was greatly influenced by the war, and is based on mistrusting people with power and influence, and also the fear of an apocalypse.

The album was released in 2003 after a series of singles, with 'Stockholm Syndrome' available for download only. The single 'Time is Running Out' made the Top Ten in the UK singles charts, but then when Absolution was released after a large European tour, it topped the album chart. The year ended with Muse winning the Q Innovation Award, and also 'Best British Rock/Indie Band' at the Interactive Music Awards.

In 2004, Muse went on another world tour, visiting France, Japan, Australia, Canada and the USA. While playing at a concert in Atlanta, Matt somehow managed to cut his mouth, and ended up requiring stitches so that he could continue with the tour. Later on that year, Chris (the bassist) damaged his wrist, but once again the tour continued, with Morgan Nicholls from UK hip-hop band The Streets standing in. Their many performances on stage have now become an important part of who the band are, and their sets at festivals including Glastonbury have proven to the world just how well their unique style works.

Having played another year of gigs, the band spent the end of 2004 and the start of 2005 playing at Earl's Court6, touring the USA, and also finding the time to lead normal lives. At the end of 2004, the band had won several more awards and had gained their first tribute band, albeit a string quartet7. Muse were named 'Best Live Act' at the 2005 Brit Awards, and took part in Live 8 on 2 July 2005, playing 'Hysteria', 'Plug In Baby' and 'Bliss' in Paris, France.

After a well-deserved break, the band began to record Black Holes and Revelations. Work continued from August 2005 to May 2006, when the album was officially announced. The album combines the influences of several bands ranging from Led Zeppelin and Queen to Franz Ferdinand, along with Matt's captivation with both outer space and the end of the world. Altogether, the album is a little more cheerful than Absolution before it, but this can be put down to the band's continual evolution as well as the input of different ideas. Though in places the album represented quite a leap from the band's previous work, tracks such as 'Supermassive Black Hole' and 'Knights of Cydonia' revealed that Muse intended to build on their previous experience rather than disregarding it.

Muse followed up the album's success by becoming the first band to play at the rebuilt Wembley Stadium on 16 and 17 June, 2007. The following March, the concerts were released as the HAARP live album and DVD respectively8.

In September 2009, Muse released their slightly experimental fifth album, The Resistance. The album hit number one in the UK and eighteen other countries, and made it to number three in the USA. Hints of Queen were once more present in abundance9 along with the usual extraterrestrial themes. However, Bellamy's 19-minute fully-orchestrated three part symphony 'Exogenesis' might just be described as a novel feature. Curiously, the album also includes a cover version of an aria from Samson and Delilah10 and an altered version of Chopin's Nocturne In E-Flat Major11. The band launched the album with two seaside gigs in Teignmouth, their aforementioned and much-maligned home town. Muse are to spend 2010 touring Europe, Asia, Australia and the US, including two more gigs at Wembley Stadium.

1Controversially, Muse upset their home town of Teignmouth in Devon by saying there was nothing to do there while growing up.2This is a competition where several bands play and eventually a winner is chosen.3EP stands for Extended Play and refers to recordings which are too long to be classed as singles and too short to be classed as albums.4Madonna's record label.5In other words, a total of 1.3 million copies of their different singles, albums and videos.6A large venue in London.7See The String Quartet Tribute To Muse by The Tallywood Strings.8The album is named after the High Frequency Active Auroral Research Program, a US research program studying the ionosphere with a view to using it for communications purposes. The umbrellas used to keep the rain off the instruments at the concerts were, of course, very similar in appearance to masts used by the HAARP project.9'United States of Eurasia' is a good example of this.10'Ah! réponds à ma tendresse! Verse-moi, verse-moi l'ivresse!' are the lyrics; 'Ah! respond to my tenderness! Fill me with ecstasy!' is the translation. The segment appears partway through 'I belong to you' and is listed as 'Mon cœur s'ouvre à ta voix'.11This forms the outro to 'United States of Eurasia' and is listed as 'Collateral Damage'.