Farm Animals and their Names Content from the guide to life, the universe and everything

There are many different types of animals which are kept on farms, each fulfilling different needs. The terminology for agricultural livestock is varied and often based on regional terms that have different meanings in different areas. This entry lists farm animals and the terms that are applied to them.

Cattle are the most productive farm livestock kept in the United Kingdom. They produce not only milk but also meat of different types at various stages in their lives. Although there are distinct beef and dairy types, there is no clear line between them. Three quarters of our beef is produced from the dairy herd.

Dairy Type - The extreme dairy type of cow is long and thin, with a wedge shape body, carrying little flesh and with prominent bones. Main dairy breeds in the UK are Friesian, Holstein, Ayrshire, Shorthorn, Guernsey and Jersey.

Beef Type - A real beef type animal is solid in its body, well covered with flesh, particularly in the hindquarters and back. Breeds include South Devon, Welsh Black, Hereford, Aberdeen Angus, Sussex.

Sheep are hardy, well covered animals, usually kept in the open all year round. They are not so intensively farmed as either pigs, poultry or cattle. The most important and the most profitable produce of British sheep is their lambs, wool is secondary. 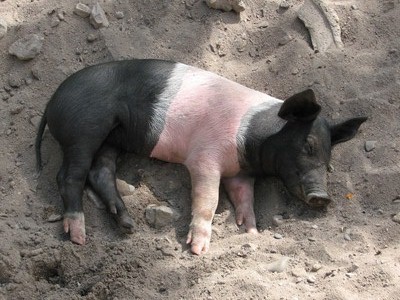 Pigs are kept for meat production. For both pork and bacon the same type of long, lean pig is needed. For manufacturing, a broader and heavier type may be suitable.

The modern quality type of pig, formerly called the bacon type, is suited to all purposes, is long, lean and fast growing. The main breeds are Large White, Landrace and Welsh.

Poultry are kept for five main reasons. Egg and meat production, are the main ones, with chickens being kept either specially for one of those purposes or for dual egg and meat production. Poultry is also kept for maternal instincts (ie broodies), and sometimes for showing and pedigree breeding.

There are two breeds, the 'American Bronzewing' and the 'White Holland'. Bred entirely for meat for human consumption.

Some exotic species are kept for commercial reasons, including Ostriches, Reas and Wild Boar.