Hello there , and welcome to the home of Parrferris!

I'm Parrferris. After another stint in Torbay (the alleged English Riviera), I now live in a converted pigsty in a remote corner of south Devon. I moved at one stage a few years back to the Far East - the far east of Devon, that is, where I wrote this entry of which I'm rather proud. I work for the grocery arm of the world's biggest consumer co-operative, about which I'm rather less happy. I walk a lot, I eat a lot, I watch too much telly and I've been an unapologetic Doctor Who fan all my life (long before it became fashionable). And I don't get to spend enough time on h2g2! This is all you probably need to know about me; in fact it's probably all there is to know!

If you want to get a clearer picture of me, imagine:
The calm serenity of Basil Fawlty
The level temper of Victor Meldrew
The sophistication of Frank Spencer
The open-minded liberalism of Alf Garnett
The good looks of Davros
The athletic physique of Jabba the Hutt
The intelligence of Father Dougal
The sexual magnetism of Mr Bean
The cheerful optimism of Marvin

I joined h2g2 just before the site disappeared, so I spent my first few weeks on the Yahboo chat site (it seems so long ago now). Despite everything, I managed to make friends with some splendid people, most of whom are now back here in Auntie's ample bosom.

To save scrolling down, here are the pitifully few edited entries I have contributed to the Guide. Hopefully, seeing the brevity of this list every time I look at my PS will shame me into writing more!

Scrumpy (Feb 25, 2002) Solo, could probably do with updating,
Gus Honeybun - Puppet (Jun 12, 2002) Solo, A hero!
Sidmouth and The Sid Valley, Devon, England. (Nov 14, 2005) Solo, my favourite entry about one of my favourite places
Clotted Cream (March 17, 2008) Solo Anyone who knows me would think it inevitable that I would write this entry eventually. Only my fourth solo entry in about seven years on h2g2 - well, I'm a slow writer!
Devon, UK (Nov 15, 1999) Contributor The date's misleading, as in fact I was peripherally involved in rewriting the whole entry from scratch in 2006
Great Walks (Mar 23, 2001) Contributor (actually, precisely one word of this is mine so I don't really deserve any credit - I'll take it where I can get it, though!)
Revels - Chocolates That Surprise (Oct 26, 2006) Contributor
Great Radio Shows (Jun 27, 2003) Contributor
Wonderful Rivers (Jun 20, 2003) Contributor, the bit about the Dart, of course.
Devon's Towns and Countryside (Apr 7, 2006) Contributor
Plymouth Contributor Played a small part in the 2008 update of this entry.

I am the Minister of Defence (& Occasional Offence) of

The Campaign to Rename Thursdays 'Thing'
Now Officially the Most Popular Uprising on H2G2™!

Overthrow the dull and meaningless routine of your week! Delete those pointless days from your calendar! 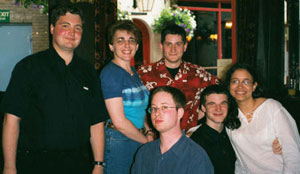 If this page looks dull...

...and the yet white glare is slowly blinding you, you're probably viewing it in the dreaded Alabaster skin. For altogether cooler results:

I am 'Keeper of Badgers'!

It is my duty to oversee all the many badger-related issues on H2G2, and to protect all the badgers that live within the guide.

The oldest and wisest of these brocks is Fred, and the youngest addition to the h2g2 sett is little Elly.

I'm lucky enough to live in England's lovliest county, Devon. I'm originally from Dartmouth an ancient borough and port in the south of the county. Unfortunately, work forced me to move just a few miles up the line to Paignton, the least attractive of the three Torbay towns, and part of one of Britain's most popular seaside resorts, where I lived for several years. Fate then dealt me a kinder hand, as the job took me to Sidmouth, a beautiful seaside town stuck in a timewarp. Most recently I returned to work in Dartmouth, to which I walk several miles every day from the aforementioned pigsty.

To learn more about the most beautiful place in the world, why not visit BBC Devon Online for news, features and pictures.

Take a brief photographic tour of Devon at the gallery

Calling all square-eyed devotees of the goggle box - if you enjoy the bits in-between more than than the programmes themselves, check out Transdiffusion

For several years as a kid, I lived in the pretty Yorkshire town of Holmfirth which has probably the best community website I have seen. The town is, of course, best known as the location for the long-running comedy series Last of the Summer Wine

Later, my family moved to Gwynedd. As a teenager I was involved in the campaign to rebuild the nearby Welsh Highland Railway. At last progress is being made, from Caernarfon in the north and from Porthmadog in the south.

The greatest television series ever - do I even have to mention the name? (Well, let's face it, the graphic is a bit of a giveaway, isn't it?)

Discover some of the secrets of London's Underground at this fascinating website. And of course there's a splendid introduction to the system here.

Contact me...My e-mail address has changed. If you'd like to mail me, leave me a message here and I'll let you know the address.