Plymouth, Devon, UK Content from the guide to life, the universe and everything 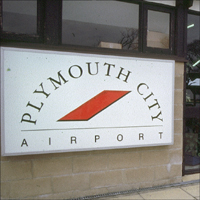 Situated at the mouths of the rivers Tamar and Plym, where Devon meets Cornwall between Dartmoor and the sea, Plymouth is the gateway to a landscape of country lanes and quaint villages, thatched cottages and country inns that is the very definition of England to its many international visitors. Plymouth is the largest city in the southwest of England, with a population of roughly 250,000. It has one of the finest natural harbours in the UK, where vessels of every description can be seen, from tiny pleasure craft to commercial fishing boats to ships of the Royal Navy. The Navy has had a long and chequered history with Plymouth, the city home to a Royal Naval Dockyard since 16901, and many sailors (both national and international) can be seen wandering its streets, alleyways and pubs. For some reason that seems to be a drawcard for many to Plymouth, but there's more - which you can read about below.

The city was almost destroyed by some of the most intense bombing of the Second World War2 (at the Charles Cross Roundabout in the City Centre, a bombed church stands as a memorial to the civilian lives lost during the Blitz) and as such parts of it are now not overly attractive, with grey concrete buildings and prefab housing dominating the skyline. In fact, the pervading sense of greyness in winter when the sea is dark, the sky is dark, the city is dark and the faces are dark, can make it pretty depressing. But when the sun shines down on Plymouth, it is a hive of activity and fun, and many ancient treasures are lovingly preserved - such as the Barbican.

Plymouth owes it 'modern' reconstruction to the 'Abercrombie Plan', on which the city centre's grid of windswept boulevards was based, drawn up in the 1930s. The City Council, in order to implement the plan, completed the work started by the Luftwaffe bombing by demolishing whatever survived. Only years of campaigning saved the Barbican from the same fate. The heart of old Plymouth, the district takes its name from the gate of a long-gone castle and the narrow medieval streets, miraculously spared the ravages of war, once echoed to the footsteps of such notables as Sir Francis Drake, Walter Raleigh, James Cook, and innumerable less celebrated travellers, embarking for the New World.

For many American visitors, the Mayflower steps are an irresistible attraction. It was from this spot that the Pilgrim Fathers said farewell to England in 1620 without a box of souvenir fudge, as visitors to the city are apt to do today. Many variations of the city's name, found around the globe, suggest ties between the new colonies and Plymouth as their point of departure from the Old World. As such, the Barbican has become a hive of fudge shops, cream tea 'shoppes', Beryl Cook print shops, pubs, eateries, and drinkeries - such as the Plymouth Gin Distillery, the Dolphin pub (which may not be some peoples tastes) and numerous other places where those departing for pastures new can drink to new beginnings.

Those starting a new life for themselves in Plymouth include the numerous students that trickle in to attend the University of Plymouth, a centre for excellence that focusses on computer technology and marine-based fields of learning. The many students that scamper about the Barbican clubs, bars and pubs during the summer increase the city's population by about 30,000 - and the gregarious mix of visiting sailors, students and American tourists is enough to turn the soberest of men to the soothing grip of Plymouth Gin or the Devonian stalwart - cider.

As a part of Plymouth City Council's plans for reinventing the city as somewhere holidaymakers would want to visit, plans were made to construct a Giant Metal Prawn and place it in the centre of the historic Barbican. The Janners (Plymothians) fought against this monstrosity from its conception, claiming that such a sculpture would ruin the quaint feel of its surroundings. After some consideration, the Council okayed its erection anyway. The reasons why Plymouth needed a Giant Metal Prawn are shrouded in mystery, but the city is now, without a doubt, the Giant Metal Prawn capital of the world3.

Plymouth Hoe is a large open area of grass and tarmac on the edge of a cliff overlooking the Plymouth Sound. Sir Francis Drake was playing bowls at the Hoe when the Spanish Armada was sighted in 1588. His legendary quip;

'There is time to win the game and beat the Spaniards too.'

is more a credit to his seamanship and knowledge of local tidal conditions, than a comment on his skill at bowls.

The Hoe is the butt of a good deal of pub humour. Plymouth locals often envision trying to fool a hypothetical American chum by telling him that they are going to visit the 'Plymouth Hoe', at which point the excited American is imagined spending all his translated currency on packs of condoms. The Plymouth Hoe is also the site where the annual Radio One Roadshow4 is held when it visits Plymouth, but most of all, as one h2g2 Researcher tells:

'The Hoe is a nice place to meet up with friends then wander down to the Barbican for a few drinks, and maybe a supper of fish and chips, on a warm summers eve.'

Smeaton's Tower, situated upon the Plymouth Hoe, is a red and white striped lighthouse unlike any other. For starters, it doesn't work; and it's actually inland... not much, but there is enough land between it and the sea for it to be considered inland, and not in water. The top portion alone has become a tourist attraction and a place to visit on field trips from the local schools. The lighthouse, which was built in 1759, is a marvellous example of the engineering skill of its day. It was eventually retired because the rock base, upon which it sat, was considered to be dangerously unstable. The tower itself was bisected and moved to its current residence to stand as a testament to its creator, John Smeaton. The remaining stump is still visible on a clear day, standing in the shadow of its taller replacement. The masonry of the base was so intricately dovetailed that it was considered too difficult to take apart in such an exposed location. The patch of green that surrounds the tower is used for a variety of purposes; from picnics in the summer through to medieval jousting tournaments, concerts, fetes and occasional kite flying, and the lighthouse overlooks a seafront lido - the Tinside Pool.

Parking in the City of Plymouth

Getting to Plymouth by car isn't too difficult. Take the M5 from Bristol to Exeter, then the A38 Devon Expressway. From London, it takes about three and a half hours on a good day, but if you are popping in just for the day, and think you can park cheaply - forget it. Parking in Plymouth is at a premium even for residents, and almost all streets are restricted. In addition, nearly all public parking is very expensive; and the instant fines are an effective deterrent. The good side is that Plymouth's main shopping area including the only (self proclaimed) fully covered shopping centre in the south west, Drake Circus, is very accessible and close to the other major attractions. In addition, there is a lending facility for disabled visitors to hire wheelchairs and buggies at very good rates. There is also a good 'park and ride' system; this is by far the cheapest option.

Other Points of Interest

A final point about Plymouth - beware of Morris Dancers and Argyle fans.

1The biggest in western Europe apparently.2A strategic target due to being a large naval base.3Perhaps only rivalled by the Big Lobster in Kingston SE, Australia.4An outdoor radio broadcast of popular music, hosted by BBC Radio One.