Charity Pin Badges Content from the guide to life, the universe and everything 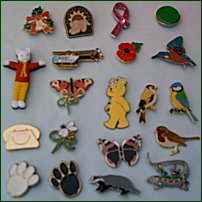 Charities soliciting funds from the populace used to stand outside supermarkets in all weathers, shaking their collection tins, sometimes for just a few pennies. However, they have long since discovered that by offering something small and collectable, and suggesting a recommended donation of £1 each for this item (at the time of writing), they could increase their financial donations, even more so if they offered a multiple-themed collection. The added bonus to this is having their charity advertised on clothing, caps or bags at the same time. These items are pin badges, more often than not the type with a butterfly-clasp, rather than a pin back.

In the past, the majority of charity badges were the round pin type, whereas today, the butterfly-clasp is the favoured type. All of the following badges, unless otherwise stated, are butterfly-clasp badges.

The pin badges are usually displayed in a small open top cardboard box, with a partitioned section at the back, which contains the coin slot. At different times of the year, these can be found on a variety of different counters in banks, building societies, supermarkets and shops. Libraries, and occasionally schools, sometimes run educational promotions about selective charities, which may also include pin badges.

Charity shops tend to have their own pin badges displayed on the counter next to their till. For instance, the Essex branch of St Lukes Hospice shops, have their own badges on display. These badges are horseshoe-shaped, with 'St Lukes Hospice' embossed around the edge, with their mascot 'Luke', a brown Labrador-type dog, in the middle.

It is easier to recognise some charities by their badges than others. Some badges will have the name, abbreviation or acronym of the associated charity on them; for others their symbols are so well-known nationally, that this is all that is needed for recognition. Some charities have adopted well-known national characters as the temporary symbol of their charity. One such character is 'Rupert Bear'. A number of charities have used the image of Rupert and his friends on their badges1.

We rarely hear about the majority of regional charitable organisations until an event throws them into the limelight. This is what happened with the Yorkshire Air Ambulance, when they rushed television presenter, Richard Hammond, to hospital after his near-fatal accident in September, 2006. Donations to Yorkshire Air Ambulance soared after their rescue of Hammond hit the headlines. This had a knock-on effect as other air ambulance services saw an increase in their donations, including the Lincolnshire Air Ambulance, whose previous fund-raising drives have included the availability of blue, white, gold and red coloured mini helicopter pin badges, with 'LINCS' embossed in gold-coloured letters.

There are hundreds of charities, both national and regional, that use the sale of pin badges to boost their funds. The following is just a small selection of the pin badges associated with some well-known national charities.

Breast Cancer Care is an organisation that campaigns for awareness and research into the causes and treatment of breast cancer, as well as offering advice and support for women coping with breast cancer, and their families. Their symbol is a small pink looped ribbon and although most commonly seen in ribbon form, it is also available as an enamel pink ribbon pin badge. One of the various outlets for purchasing the pink ribbon pin badge is the door-to-door cosmetics company Avon; this is just one of the 'pink ribbon' items available from Avon for raising funds for breast cancer.

Macmillan Cancer Relief is an organisation that offers help and support for people coping with cancer and their families. They have issued numerous different badges over the years, including a Rupert Bear selection. Most of the pin badges - though not all - have incorporated their green ribbon logo, these have included butterflies and flowers.

Remembrance Day - Poppy Day, which commemorates service men and women, is held annually on the 11 November. Every year at 11am – the eleventh hour of the eleventh day of the eleventh month - a two-minute silence is observed in remembrance of the fallen men and women of two world wars, as well as other armed conflicts. The funding, via the poppies, which helps and supports ex-service people and their dependents, is organised by the Royal British Legion, who have community clubs across the country. Within the last couple of years, a new design of the poppy has been circulated; the poppy pin badge. These are now available mainly from Royal British Legion Clubs. As from 2006, these tiny enamel poppies are also available with or without the issue year embossed on the poppy.

NSPCC - National Society for the Prevention of Cruelty to Children

The NSPCC campaigns for children to have a safe and cruelty-free childhood, in a safe environment in which to grow up. The NSPCA motto is Cruelty to Children must stop. FULL STOP with a green full stop at the end. A green dot is one of the NSPCA pin badges.

The Variety Club helps children with disabilities, and children who are ill or disadvantaged in a variety of different ways, including arranging days out and holidays. A gold-coloured heart, with a pin, rather than butterfly-clasp, is their symbol. The basic shape and colour of the badge has remained the same over the years, although the design and embossing on the face of the heart changes each year.

The BBC Children in Need Appeal is an annual event, which goes out live on television and radio, and encourages as many people as possible to participate in raising funds to improve the lives of children in need. Pudsey Bear, the yellow teddy bear with the spotted bandage over his right eye, is the mascot of the Children in Need Appeal. One of the outlets for Pudsey Bear pin badges, along with other fund raising Pudsey Bear merchandise, is Boots the chemist chain of shops, at selective times of the year.

Childline is a free telephone helpline (0800 1111), where children and young people can call to discuss any problems they may have with a trained counsellor. Among their pin badges is a gold-coloured telephone with a smiley face.

Animal charities do not receive any government funding and they rely on public donations, legacies and sponsorships. There are numerous different animal and bird badges available from the various animal charities. The following are just three of them.

RSPCA - Royal Society for the Prevention of Cruelty to Animals

The RSPCA is the UK's largest animal charity. The RSPCA deals with cruelty to animals, including prosecutions where necessary. A major part of their work is the re-homing of abandoned or unwanted pets and education on the preservation, care and well being of animals. They have had a wide variety of animal pin badges both with and without the 'RSPCA' logo. These include: cat, dog, rabbit, horse and parrot. There are also single paws in a choice of various colours.

The PDSA treat injured and sick domestic pets for pet owner's receiving benefit in their PetAid hospitals, as well as promoting responsible pet ownership. In the 1970s, in some parts of the UK, there used to be mobile PDSA vans that went to housing estates offering basic veterinary care and advice to pet owners. They also have a selection of animal badges that include their logo.

RSPB - Royal Society for the Protection of Birds

The RSPB are concerned with the protection, conservation, preservation of, and education about, birds. During the summer of 2006, the RSPB had a promotion of 'British Wildlife' pin badges and collection box at Elan libraries, the Essex library service. Their British wildlife badge collection includes a huge selection of birds, such as: the blue tit, robin, kingfisher, blackbird, goldfinch, swan, eagles, owls and red kite. The selection also portrays other wildlife: badger, fox, hedgehog, blue damselfly and a variety of other insects, which include bees, ladybirds and butterflies, including the red admiral.

1It can be assumed that the charities negotiated with the copyright holders, to use the characters, or a likeness of them.