How to Look after Cut Flowers Content from the guide to life, the universe and everything 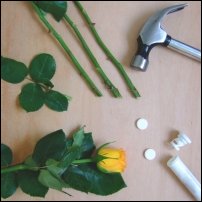 One of the greatest thrills in a woman's (or possibly a man's) life is to receive a spectacular bouquet of flowers. Usually wrapped and delivered to a place of work, with a small greetings card attached to the outer covering. Once the thrill has worn off a little, you need to know how to look after your flowers for maximum benefit and long-term enjoyment.

Obviously you will want to carry your flowers home, still in their original wrapping. Not just to enjoy the envious looks from women (or men) and interested glances from men, (or women), but just to be practical.

Transporting and Looking after your Flowers

Many florists now deliver bouquets already arranged in a strong bag of water which can be kept for a while as they are - this kind of arrangement should be left undisturbed until you get it home. If the bouquet you receive hasn't been supplied like this then keep in mind these simple instructions...

To the flowers in their hot, stifling wrapping, the hours until you leave for home can cause them to wilt and drop their petals, and shorten their vase life considerably. So firstly, find a sink, put in the plug, and stand up your bouquet in water until you leave for home. If this isn't possible, a bucket or washing up bowl will do. Whatever your method, your flowers need a drink of water, and fast. Remember to wrap something wet around the bottom of your flowers if the journey home is going to be a long one - a towel is good for this. Then place the wrapped end in a plastic bag so you don't spoil your clothes.

Ideally, you would already own a vase or two. If you don't, purchase a large glass one, the wider it is at the top, the better. Then drop large hints to your nearest and dearest that you would like to practise your flower-arranging skills. Or send yourself a bouquet. Or send one to your sister or best friend or mother and hope she returns the favour.

A bouquet usually contains enough flowers to fill two vases. Arrange the larger flowers at the back and the smaller ones at the sides and the front. Don't be afraid to mix colours, flowers love to show off, and the more striking the arrangement the better. Never cram a vase too full. Better two vases with plenty of space than one overflowing. Wrap the ribbon that came with the bouquet around your vase. Check your own garden for greenery, if none came with your bouquet. Use half of the packet of flower food straight away, mix it with the vase water and save the rest for the water change. If you didn't receive any flower food with your bouquet, phone up the florist's shop and complain!

How to Look After your Cut Flowers

Soft stemmed flowers (daffodils, tulips, lilies, freesias, etc) benefit from having a little stem cut off after the water change. You will notice after they've been standing in water that the bottom of the stem curls. Snip this off with sharp scissors and replace in the fresh water. Yellow daffodils and red tulips make a spectacular spring display.

Beware of the pollen on lilies, it stains skin and clothing, so take care when drawing curtains in front of your vase.

Roses - Use a hammer or blunt instrument to 'bash' the cut end of the stem and add an aspirin to the water. Top up with lemonade. If rosebuds start to droop before they open, remove the stems and plunge them into boiling water for a few seconds. Arrange with gypsophilia and greenery (like fern) for a spectacular arrangement.

Carnations - Some flower suppliers remove the suckers from carnations to grow more plants. Some don't. This is where you can capitalize and get new flowers for next to nothing. Suckers are the growths on the stem which don't have buds on. Peel them back and off, there may be up to ten per flower stalk. When you have collected all the suckers, make a cut with a sharp knife, just above where it was attached to the parent plant. Dip the cut end in water then shake. Dab the damp end into a pot of hormonal root powder, and plant it straight into your garden, in a hole made by a pencil or the end of a spoon. Firm the earth around the sucker and water gently, don't flood it. Some won't take, but some will. Every one is a free plant and soon you will be able to pick your own carnations.