Laurel and Hardy - Comedians Content from the guide to life, the universe and everything 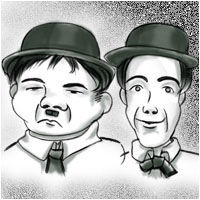 The funniest, cleverest one-liner you could ever think up will never be as funny as a bucket landing on someone's head.
- Arthur Smith, English comedian

Laurel & Hardy are one of the greatest comedy duos in cinema history. Even looking at them is enough to make you smile. Oliver Hardy was a larger than life American with a comically small moustache. Stan Laurel was the child-like beanpole of an Englishman perpetually bemused by life. Together, their relationship and the comic situations that they found themselves in, were the subject of countless films. Between 1927 and 1952, they made the world laugh and jumped successfully from the silent era into the 'talkies'.

Born in 1890 to a theatrical father, Arthur Stanley Jefferson grew up in Ulverston in Lancashire. After leaving school he did odd jobs around the theatres and music halls until he landed a part in a play and his talent became immediately obvious. He spent many years as an understudy to Charlie Chaplin and they arrived together in America with a touring production of a show that eventually became known as A Night in An English Music Hall. Unlike his future partner or Chaplin, Stan rarely made ventures into film and spent most of his time performing in vaudeville theatres.

In 1924, he joined the Hal Roach film company as a scriptwriter and two years later stepped in after one of the stars of Get 'Em Young was injured. That star was Oliver Hardy. On the strength of his performance, Stan was encouraged to create a part for himself in the upcoming feature Slipping Wives. It was immediately obvious to everyone on the film set that the time Laurel and Hardy were on stage together was pure comedic gold. They were paired together so frequently that they became comedy partners.

Stan was married four times and had one daughter Lois Jr, born in 1927. The 1930s saw him perpetually unhappy at home and found reasons not to be there. Already a workaholic, he threw himself further into the workings of the studio or indulged in his favourite pastime of salmon fishing. He also bred ducks.

Born in 1892, Ollie started life as Norvell Hardy and did not start calling himself Oliver until his father died. He was brought up in Harlem, Georgia and went on to study law at Georgia State University. A gifted singer from an early age, he also studied at the Atlanta Conservatory. Fascinated by the medium of films he moved to Florida where he worked as a jobbing actor1 with various film companies including Gaumont and Pathé. In 1917 he appeared in a film called The Lucky Dog alongside Stan Laurel. They went their separate ways until Ollie joined the Hal Roach company and, after 11 features together, became an official double act.

Oliver Hardy's personal life was difficult to say the least. He was married three times and the first two times, to Madelyn Saloshin and Mytre Reeves, ended in divorce. The latter marriage was particularly unhappy as Reeves suffered from addictions and depression, which Oliver found difficult to deal with. His last marriage, however, was a true love match. He met Lucille Jones on the set of The Flying Deuces and married her in 1940. The marriage lasted until he died of a stroke in 1957.

Look at any filmography of Laurel and Hardy and the first thing that hits you is the sheer rate of production of films in the 1920s and '30s. Producing almost a feature a month, sometimes more, they made over 70 films for Hal Roach's film company. At first these were silent films, but in May 1929 they made the jump into talkies with the enchantingly titled Unaccustomed as We Are. While Ollie acted, Stan combined his screen duties with scripting, directing and editing all their features. Ironically, he portrayed himself on screen as a dunce, while off screen he was the powerhouse behind the duo's success.

The close relationship Stan and Ollie had with their studio was destroyed by an argument in 1934 over the script of Babes in Toyland. While they continued to make movies with a free hand, their working relationship with the studio became more professional. It is certain that their work for the Hal Roach company would have come to an end at some point as the movie industry was increasingly dominated by larger and more profit-driven operations. In 1940 they signed with 20th Century Fox, but in the following five years only made nine films. Their last film Atoll K was released in 1952 and was panned by critics and audiences, signalling the end of their careers.

They only won one Oscar, for The Music Box, a film released in 1932 in which Stan and Ollie attempt to deliver a piano to a house up a steep hill. Stan later was awarded a Lifetime Achievement Oscar in 1960, 3 years after Ollie's death. Stan died in 1965 and it was only then that audiences and the film industry realised what they had lost. Buster Keaton said of Stan 'Forget Chaplin. Stan was the greatest.'. They continue to be loved by audiences worldwide; their fan club is named the Sons of the Desert after the much-loved film of the same name.

The influence of Laurel and Hardy cannot be over emphasised; they represent a direct link from the music hall and vaudeville traditions to modern comedy. Their fans are almost too numerous to mention but it is perhaps most obvious in the physical comedy of Lee Evans and Morecambe & Wise. Other people who cite them as an influence include Steve Coogan, Stephen Fry, John Cleese, Robbie Coltrane and Ardal O'Hanlon. The latter freely admits the direct correlation between Stan and Ollie and the relationship between Father Dougal and Father Ted in the television sitcom, Father Ted.

A final point to make is that the phrase 'another fine mess', while popularly believed to be Ollie's catchphrase is actually the name of one of their short films, released in 1930. When disaster struck, Ollie would turn to Stan and say 'Well, here's another nice mess you've gotten us into'.

Interesting Links To Find Out More

1Hardy appeared in the silent version of The Wizard of Oz, which was released in 1925.