'Monty Python's Spamalot' - the Broadway Musical Content from the guide to life, the universe and everything 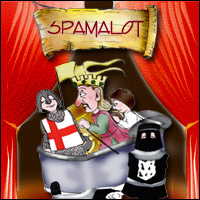 Are you suggesting that coconuts migrate?

Monty Python's Spamalot is a Broadway musical comedy 'lovingly ripped off' from the 1975 cult classic motion picture Monty Python and the Holy Grail, about King Arthur and his Knights of the Round Table charged by God to seek the holy grail.

Python Eric Idle originally wanted to make a sequel to The Holy Grail, but since the other Pythons were not convinced, he decided to make a musical of the original movie instead. In 2002 he got together with composer John du Prez to collaborate on a musical score for the show. Idle also wrote the script. Spamalot was directed by Mike Nichols1 and choreographed by Casey Nicholaw.

Previews of Spamalot began at the Chicago Shubert Theater from 21 December, 2004. On 9 January, 2005, it officially opened there. After previews beginning on 14 February, Spamalot then opened on Broadway at the Shubert Theater in New York City, on 17 March, 2005, where there was a reunion of all the Pythons2. The show opened in London at the Palace Theatre in October, 2006.

Origin of the Name

'Spamalot' is an obvious play on words, combining 'Camelot' and 'Spam', the tinned meat which has great significance in the Monty Python world. It comes from the song 'The Knights of the Round Table', featured in both the movie and the musical, a product of the need for something to rhyme with 'Camelot':

We dine well here in Camelot
We eat ham and jam and Spam a lot.

The original Broadway cast was as follows:

One Rabbit Stew Comin' Right Up!

Spamalot features many of the best-loved bits from the movie, including the Killer Rabbit, the Black Knight, coconuts, the Knights Who Say 'Ni!' and an intelligent debate on the airspeed velocities and migratory patterns of swallows, both European and African. Unfortunately, it does not feature the Witch Trial scene, the Three-Headed Knight, the Bridge of Eternal Peril, or Roger the Shrubber. However, there are elements of the show that were not featured in the movie, such as the Lady of the Lake. Moreover, Spamalot ends rather differently than the film and arguably for the better, since Spamalot's ending is at least more satisfying than the film's.

Throughout the show, there are various references to famous Monty Python sketches such as the Lumberjack Song, the Fish Slapping Dance and the Dead Parrot Sketch, that Python fans will recognise. There are also spoofs of things from other musicals such as Singin' in the Rain, Fiddler on the Roof, West Side Story, and Les Misérables.

Nobody Will Go, Sir, If It's Not Kosher Then No Show, Sir.

Stop it! Stop that! Stop all that singing!

On 22 March, 2006, 1,789 people gathered outside the Shubert Theater in New York to each clap together two coconut halves. The 'World's Largest Coconut Orchestra' is officially noted in the Guinness Book of World Records.

1Director of numerous films, including The Graduate and Catch 22.2Except for the dead one.3A film actor most famous for The Rocky Horror Show.4Otherwise famous as a voice on The Simpsons.5Most famous for his role as Niles on the sitcom Frasier.