'The Rocky Horror Show' Content from the guide to life, the universe and everything 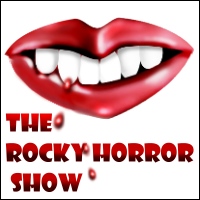 The American science fiction and horror movies of the 1950s resorted to the same basic theme many times over - a couple of all-American teens encounter an alien plot to take over the world. Travel twenty years forward in time and a British stuntman and actor called Richard O'Brien pens a play for the theatre that combines a warm-hearted tribute to this genre of film with high camp, cross dressing and homosexuality. This isn't the story of that man, this is the story of that play - The Rocky Horror Show.

The plot starts simply, in the all-American town of Denton; Brad Majors and Janet Weiss get engaged at their friend's wedding and decided to tell their good news to their friend, and former teacher, Dr Everett Scott. On their way to visit Dr Scott, their car gets a puncture, so Brad and Janet are forced to brave the rainy night to try and find help at a castle1 they passed.

This castle is home to Frank-N-Furter2, a cross dressing scientist3, his servants Riff Raff and Magenta4 and his groupie Columbia. On the night that Brad and Janet call, they are having a party to celebrate the unveiling of Rocky, a man that Frank built. This party is crashed by Eddie, a biker and former lover of both Frank and Columbia. Peeved at the interruption, Frank then kills Eddie with a big axe.

Brad and Janet are then 'invited' to stay the night, during the hours of darkness, both of them lose their virginity to Frank. Much to Frank's annoyance, Janet also ends up sleeping with Rocky, the creature he had created to provide pleasure to him and him alone.

It is at this point that the wheelchair bound Dr Scott arrives and tells everybody that Frank is an alien5. On this bombshell they are all invited to dinner by Frank. At dinner Dr Scott reveals that Eddie was his nephew. In the film, Frank, not wanting to be upstaged reveals that the main course they had all been enjoying was in fact Eddie.6.

Frank then uses one of his inventions to hypnotise Dr Scott, Brad, Janet, Rocky and Columbia into doing a floorshow in corsets and fishnets. At the end, Frank decides to return to his home planet. However Riff Raff and Magenta announce that his mission on Earth has failed, kill him, Rocky and Columbia and allow Dr Scott, Brad and Janet to escape before transporting the castle back across space.

All this is narrated by a criminologist, his case notes binding the story together.

O'Brien penned the screenplay and songs for the stage play of The Rocky Horror Show along with Australian theatre director Jim Sharman. Sharman met O'Brien when O'Brien played Herod for one night when Sharman was directing the London production of Jesus Christ Superstar.

The Rocky Horror Show opened on 16 June, 1973, at The Royal Court Theatre, Sloane Square, London. The run was scheduled to end on 7 July, however the final show was cancelled and the show moved out onto the King's Road to the Classic Cinema, Chelsea. This theatre was already booked for demolition, and on 3 November, the show opened at the Essoldo Theatre. It remained there until it opened in the 'proper' West End, at the Comedy Theatre on 6 April, 1979. It closed almost a year and a half later on 13 September, 1980, after 2960 performances.

The original cast was as follows :

The show (perhaps via the use of sonic transducers?) arrived on the West Coast of America in 1974. During its 9 months in Los Angeles, the deal to immortalise the show as a cinema film was made. The show transferred to Broadway, but closed in failure after only 45 performances.

However the show's cult appeal led to a comeback after a West End revival, with shows springing up in many countries and an enthusiastic attitude to audience participation. During the 1990s a new production started touring in the UK, with celebrities such as Victor Spinetti7 and Nicholas Parsons8> taking the role of the Narrator. The role of Frank brought 80s soap and pop heartthrob Jason Donovan back into the public gaze. The role was also taken by comic actors Tim McInnerney (in a West End run) and Jonathon Morris (from Liverpudlian sitcom Bread), Buffy star Anthony Head and Winter Olympic hero Robin Cousins9.

The film, called The Rocky Horror Picture Show, was released on 14 August, 1975 in London. It was based on a screenplay by Richard O'Brien and Jim Sharman, as well as being directed by Sharman.

The filming took place in England, staring on 21 October, 1974. It was mainly filmed on a sound stage with the Oakley Court Hotel, Windsor, used for many horror films, appearing as Frank's place.

Some of the original stage cast stayed the same, some new, bigger named actors and actresses came into the fold.

The film failed at the box office almost everywhere, although it performed fairly well in Los Angeles because the stage show had already built a following there. However cinema owners noticed a curious trait in their audiences: while The Rocky Horror Picture Show did not draw in that many people, those people that came to see the film tended to come back again and again.

Soon the cinemas were showing the film at special late night sessions, with live casts acting along in front of the screens and audience participation actively encouraged. Twentieth Century Fox, decided that the final two songs, 'Superheroes' and 'Science Fiction Double Feature', made the film's finale seen too down beat, so it re-released a cut without them for the midnight shows.

The live casts were generally unpaid Rocky fanatics, who'd learnt the script and the moves, scrimped and saved to make their own costumes and props. They performed just for the love of Rocky and to give the audience a good time. If the casts did get a percentage of ticket sales, the money would be spent on buying or building bigger and better props and costumes for their performances.

The outrageous campness, catchy songs and the parodying of the sci-fi/horror genres masked what a groundbreaking film this actually was. Here was a movie that featured fetish wear, cross dressing, homosexuality and cannibalism, as well as originally giving the 'outcasts' of society a place to meet up and feel like a community, as well as letting more introverted people come out of their shells. However the film gradually fell into the mainstream as more shocking films were released.

Shock Treatment is a rarely-seen sequel movie to The Rocky Horror Picture Show. Set a few years after the events of Rocky Horror, it sees Brad and Janet's home town of Denton as a massive TV studio. With their marriage on the rocks, Brad ends up imprisoned in the local mental hospital and Janet is groomed to be a star.

This was not as big a success as The Rocky Horror Picture Show, and has received many mixed reviews, however can be seen as a fun commentary on mass media, celebrity culture and drug fads.

Released in 1981, it was again directed by Sharman from a O'Brien / Sharman script. By the time the film was being made, Sarandon and Bostwick were not able to take up their old roles and Tim Curry also was not available. However many of the other stars or the original came back but with different parts. Jeremy Newson as Ralph Hapschatt was the only person to have the same role in both films.

1Apparently a castle is not uncommon in that part of America!2With a name like that, you should except trouble, or at least a barbecue...3Friday nights at English rock clubs near universities will reveal that this is not exactly unusual.4Who are also brother and sister.5Frank, Riff Raff and Magenta all hail from the planet Transsexual in the galaxy of Transylvania, as mentioned in the song, 'Sweet Transvestite'.6Recipes for roast biker are not currently available on BBC Food7Known for playing paranoid characters in Beatles films.8Host of the long running radio show Just a Minute, and the presenter of legendary ITV gameshow Sale of the Century.9Cousins' portrayal of Frank inspired a run of Rocky Horror on Ice10The lips belonged to Patricia Quinn, the voice to Richard O'Brien.11It doesn't explain why they chose to go and visit on a really dark, stormy night when Dr Scott was in fact out investigating alien activity.12As you do!