'Frasier' - The TV Series Content from the guide to life, the universe and everything 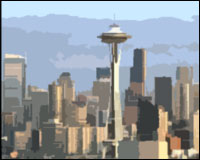 Frasier was a popular US sitcom that ran from 1993 to 2004. A spin-off from hit comedy Cheers, the show is based on the life of radio psychiatrist, Dr Frasier Crane. Critically acclaimed, Frasier is one of the most successful TV shows of all time and was widely called the most intelligent show on US television. Set in Seattle, USA, the show revolves around Frasier and a small group of his family and friends. With an eclectic blend of wit, word play and physical humour, the show relies on complicated and far-fetched plots that require the full attention of the viewer. But most of the humour comes from the characters and actors that play them.

When Ted Danson, who played Sam Malone, decided to leave Cheers at the end of its eleventh season, there was no way the show could go on without him. So Cheers writers David Angell1, Peter Casey and David Lee put together Frasier to fill its vacant place in the NBC line-up. The show premiered on 16 September, 1993 with opening episode 'The Good Son.' Both the viewing public and critics met it with near-unanimous praise.

The show had a number of peculiar quirks that helped to separate it from other comedy shows. One of the most notable occurs between certain scenes on the show where a short cue-card, usually a pun about the upcoming scene, is displayed for a few seconds. The start of each show shows a skyline of Seattle with the name 'Frasier' written beneath it. Each season the colour of the name changed; ie, the first season it was blue, the second season it was red, and so on. Also, during some episodes we see Frasier giving out advice to people who call into his radio show. Most of these 'callers' are actually famous celebrities, and at the end of each season they have a 'Thanks for Calling' list that names all the celebrities that called this season. Another oddity is the theme song, which comes at the end of the show. Sung by Kelsey Grammer, the song has nothing to do with the show and is about having an urge to eat tossed salads and scrambled eggs. The final line of the song is constantly changing from episode to episode.

Over the course of the show there are several nods to Cheers. On many occasions Frasier can be heard mentioning the bar back in Boston, or things that occurred during the run of Cheers. Over the course of Frasier, all but two of the regular cast from Cheers show up2. In one episode Frasier goes back to Boston and runs into several of the Cheers gang at a party.

There are some continuity errors that Frasier created in relation to Cheers. In one episode of Cheers, Frasier can be heard saying that his scientist father died several years before, and not once in Cheers does Frasier mention having a brother. These were sort of addressed in an episode in the second season when Sam Malone came to visit Frasier in Seattle. Frasier explains that he only said Martin was dead because they were fighting at the time, and Sam points out that Frasier never said anything about a brother. No explanation was ever given about Martin being a scientist though.

The end of the seventh season saw the show's high point as its final episode got 33.7 million viewers, more than any TV show in six years. This was for 'Something Borrowed, Something Blue,' the episode where Daphne and Niles finally get together3. But after this the two head writers, Christopher Lloyd and Joe Keenan, left the show. The eighth season saw a dip in quality, and as a result the viewer numbers went down.

The numbers stayed down for several seasons, and as a result it was decided that the eleventh season would be the last. Christopher Lloyd and Joe Keenan returned for this final season and wrote the final episode 'Goodnight Seattle.' The end of Frasier didn't see the big fanfare of the kind bestowed upon Friends and Sex and the City, which ended their runs in the same year. It was a subdued ending for one of the biggest benchmarks in television comedy.

Frasier was introduced as a recurring character in the third season of Cheers and became a main cast member in the fifth series. Originally a very serious person, Frasier had an ex-wife called Nanette and was left at the altar by Diane Chambers. Towards the end of Cheers, Frasier began to mellow out and married Lilith Sternin with whom he had a son, Frederick.

At the start of Frasier, he has left Lilith and moved back to his hometown of Seattle. He works as a popular radio psychiatrist for KACL4 talk radio, where he has the famous catchphrase 'I'm listening.' He lives in a fancy apartment in the Eliot Bay Towers and he regularly goes to see operas or attends his local wine club. He's pompous and arrogant and yet also strangely lovable.

Martin is Frasier's rather average father5. A former police officer, Martin was forced to retire after getting shot in the hip. Forced to constantly walk with a cane, Martin is no longer able to fend for himself and has moved in with Frasier, a situation that he really isn't comfortable with. In the early seasons Frasier and Martin are constantly at one another's throats, but as time goes by the two begin to develop a close bond.

Daphne is Martin's physical therapist who helps him with his bad hip. She too has to move into Frasier's apartment and also acts as his housekeeper. Originally from Manchester, England6, Daphne moved to America, partly to get away from her domineering mother and loutish brothers. Very eccentric, she believes she's psychic, and has numerous other bizarre tendencies that annoy Frasier. She constantly refers to both Frasier and Niles as 'Dr Crane,' which has been known to lead to some confusion7.

Frasier's brother, Niles, is very much like Frasier back in his early days on Cheers, although he also mellows out during the course of the show. He too is a psychiatrist, although he and Frasier are regularly at odds with one another over psychiatric methods. He's even more pompous, arrogant and lovable than Frasier. Niles had been attracted to Daphne since he first met her, but this puts Niles in a difficult position as he's married to Maris. This marriage breaks down and Niles and Daphne finally get together at the end of the seventh series.

The producer of Frasier's radio show, Roz Doyle is a very independent woman. At the start of the show she is well-known for her high sex drive and multiple partners, but this aspect of her personality is less apparent after she gives birth to her daughter, Alice, in the fifth season. Originally Niles's avowed enemy, she slowly begins to get involved in the world of Frasier's dysfunctional family. A slight attraction between her and Frasier exists, but it never really goes anywhere.

Eddie8 is Martin's dog, a Jack Russell Terrier. Frasier hates him because Eddie constantly stares at him. Martin loves him and considers him to be his third son. Daphne uses him as an excuse to go to the dog-park to meet all the single male dog-owners. Not one for doing tricks, Eddie is bright in his own way.

Bob 'Bulldog' Briscoe: Bulldog was part of the show from the first episode9 and he's a radio personality at KACL who hosts The Gonzo Sports Show right after Frasier's show. The two never really get along and Bulldog is constantly playing practical jokes on Frasier. Bulldog is fired at the end of series six but he does return for several episodes in later series.

Kenny Daly: Kenny is the station manager at KACL. Introduced at the end of the fifth series, Kenny is partly to blame for getting all the KACL personalities (including Frasier) fired, although they are all rehired six months later. Married with twins, his marriage breaks down, and he relies on Frasier for psychological help.

Noel Shempsky: Noel also works at KACL although his actual job is a mystery. He's in love with Roz, although she's utterly repelled by him. He's a big fan of Star Trek.

Lilith Sternin: Lilith is Frasier's frosty ex-wife from Boston. She usually drops in once a year, sometimes with their son Frederick, to see Frasier.

Sherry Dempsey: Sherry was Martin's risqué girlfriend for over a year, much to the horror of Frasier and Niles. They eventually broke up because she didn't want to marry him.

Donny Douglas: Donny was originally Nile's divorce lawyer, but as luck would have it he hooked up with Daphne and they got engaged. Daphne left him for Niles on their wedding day, something Donny never truly forgave her for.

Maris Crane: Maris is never actually seen on screen at all, although she is constantly mentioned. Niles's first wife, she's very rich and likes to shop in expensive stores. She's very, very skinny and has an addiction to plastic surgery. She doesn't really care about Niles or his feelings and their marriage breaks down partly because of an affair she has with their marriage counsellor.

Mel Karnofsky: Mel is Niles's second wife. Formerly Maris's plastic surgeon, Mel and Niles dated for a few months before eloping. Niles left her for Daphne a few days after getting married.

Gertrude Moon: Daphne's overbearing mother originally only appeared in the show when Daphne would mention something she said on the phone. She finally appeared on screen for the first time at Daphne and Donny's wedding. She returned a year later and moved in with Daphne and Niles, after her husband left her.

Bebe Glazer: Bebe is Frasier's agent. Often viewed as more evil than the devil, she'll do anything for her clients, and is widely regarded as one hell of an agent.

Proof of the popularity of Frasier can be shown by the fact that it was once parodied on The Simpsons in the episode 'Brother From Another Series.' In the episode Kelsey Grammer reprises his role as Sideshow Bob10 who is forced to live with his snobby brother Cecil, played by David Hyde Pierce.

In 2001, Niles Crane was voted the tenth-best TV character of all time in a Channel Four poll. This makes him the second-highest-rated American TV character after Homer Simpson. None of the other characters from Frasier were in the top 100.

1David Angell was killed in the 11 September attacks; he was on one of the planes that were crashed into the World Trade Center towers. As a result the opening episode of the ninth series, 'Don Juan In Hell', was dedicated to his memory.2And of the two, Nicholas Colasanto, who played Coach, was dead.3Ending the longest romance from afar in TV history.4The name KACL is actually concocted from the first letter of each of the show's creators' surnames.5Frasier's mother, Hester, died a few years before the series began.6Daphne is unusual for an English character in a US show, as she is supposed to come from a region other than London. Unfortunately her attempt at a Manchester accent is not entirely successful.7She only starts to call Niles by his first name when they start dating in the eighth series.8While Eddie was mainly played by a dog called Moose, in later seasons some of the more strenuous work had to be done by his son, Enzo.9Dan Butler, who played Bulldog, was even included as part of the main cast in the episodes he was in.10For the sixth time.11In Cheers, Frasier and for a cameo role in Wings.