Jack Russell Terriers Content from the guide to life, the universe and everything 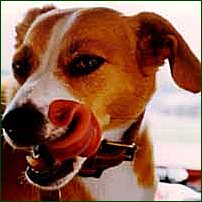 This enigmatic bundle of nervous energy owes its name and character to legendary Oxford Minister 'Sporting' Jack Russell. The 19th-Century huntsman was searching for a dog small and brave enough to follow the fox into its den, but with enough restraint to 'worry' (ie, nip and harass) the animal rather than kill it outright. Additionally, the dog had to have enough stamina to run with horses all day, and be a skilled ratter to boot. A tall order for the hunting packs of the time.

Travelling near his home in 1851, Parson Jack happened across a terrier mongrel riding on a milk float. Impressed by her muscular physique and alert nature, he paid the milkman a shilling for the bitch - 'Trump' - and set about breeding her with his own dogs. Trump was white except for brown patches over each eye and ear, and another at the base of the tail. This remains the basic colouring template for the breed to this day.

The Parson's breeding programme has, 150 years later, given the world a tough, sturdy and strong-willed terrier, impossible to intimidate and possessing physical strength and endurance beyond that which might be expected for its compact physique. They are also charming, intelligent, playful and loving, and this rich concoction has made them one of the most popular and appealing breeds in the world. Although small, a Jack Russell should appear confident and ready for action, with good muscle definition and jaunty, free gait. Facially, they have an alert, inquisitive expression set off with clear brown eyes.

The tail is traditionally docked. This was originally carried out because the natural, rather grand brush would present an inviting target in a scuffle. An inch or so of stump is left so that the dog can be extricated from whatever tight spots its inquisitive nature is liable to lead it into. Docking for non-working dogs is now illegal in the UK, but any Jack Russell bought from a working environment - usually a farm - is very likely to have been docked shortly after birth.

Colouring is any mix of white, black and brown, so long as the greater part is white. Coats can be smooth or, as in the case of Parson Jack's early litters, rough and slightly curly. They shed all year round.

It should be remembered that from the outset these dogs were bred with bull terriers and foxhounds to enhance the stubbornness and stamina of the bloodline, and these characteristics can be seen clearly. This is a dog with endless bounce, who will happily invent his own entertainment at the expense of your household furniture if not adequately amused. He will chase anything that moves, which can cause particular problems in cat owning households. However, Jack Russells are not aggressive by nature (although they are very assertive), and if the feline is confident enough to stand its ground during the initial encounters, a lasting cease-fire is usually the result. As with any breed, unfamiliar children should not tease or roughly handle this dog, as he may well nip in self-defence. He is, after all, of a breed intended to hunt vermin and flush out cornered foxes, and is therefore likely to defend himself vigorously if he feels threatened or startled. This is not to portray the breed in a bad light, merely to make the point that Jack Russell Terriers can have a particularly highly-strung brand of affection. Much will depend upon environment and upbringing. There are, as the saying goes, no bad dogs - only bad owners.

This engaging little hound adapts well to a suburban lifestyle, where it is an efficient and highly vocal watchdog.

Perhaps surprisingly for such headstrong little beasts, Jack Russells are relatively easy to train. Being natural show-offs, they revel in the attention a well-performed trick or command brings, which is why they are so commonly used in films and advertisements. It is vital, however, that the dog is taught to return upon command when off the lead, as the natural tendency to investigate and chase could lead to all manner of unplanned adventures. A first time owner may well benefit from sessions with a professional trainer, if only to lay down the basics for a particularly frisky puppy.

Treats should be given sparingly, especially after spaying or neutering, as smaller dogs tend to put on weight easier than their larger counterparts. Generally, they are best saved for training, as dogs quickly develop a very fussy palate. A steady diet of good commercial dog food and mixer will meet all nutritional requirements.

This is a breed that requires regular and preferably vigorous exercise, both mentally and physically. While walking is a fine 'base', the Jack Russell really needs to be off the lead and rummaging in the undergrowth once in a while to express himself fully. In gardens that can afford the space, a sandy patch set aside to satisfy the digging instinct is sure to be a favourite haunt. Gardens and yards should be securely enclosed, as the Jack Russell is both strong and ingenious enough to defeat all but the best fencing. They generally get on well with other dogs, although on occasion their over-exuberance may land them in hot water. Again, though, much will depend upon the individual animal's upbringing.