Graham Chapman - Writer and Actor Content from the guide to life, the universe and everything 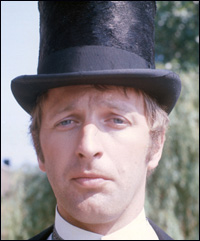 Graham Chapman was born in Leicester, UK, on 8 January, 1941. There was an air-raid at the time of his birth, and an air-crash was responsible for one of his earliest memories. His father, a police constable, was called to the scene, where the three-year-old Graham was confronted with the sight of aeroplane wreckage and, more disturbingly, human body parts. Whether this influenced his decision later in life to study medicine is open to speculation.

After attending several schools, Graham ended up at Melton Mowbray1 Grammar School, where he took up acting. Perhaps more importantly, the headmaster of the school encouraged him with his application to Cambridge University, although Graham's desire to study at Cambridge probably had more to do with the Cambridge Footlights than with any academic ambition. After a remarkably easy interview at Emmanuel College, Cambridge2, he was offered a place, finally arriving in Cambridge as a student in 1959.

Once in Cambridge, Graham immediately tried to join Footlights but was refused by David Frost3. The traditional procedure for joining Footlights at the time was to stage a 'smoker' (short for 'smoking concert': a small-scale comedy revue), which would be watched by members of the Footlights committee. Graham performed at such a 'smoker' and through that was invited to audition for, and join, Footlights. It was in Footlights that he met future writing partner, John Cleese.

Leaving Cambridge in 1962, Graham continued his medical training at St Bartholomew's Hospital ('Bart's') in London. At the same time, that year's Footlights show, A Clump of Plinths, transferred to London's West End and was renamed Cambridge Circus. After one of the cast dropped out, Graham was invited to replace him, so, while his days were spent as a medical student, his nights were spent on the stage. Soon the show was invited to tour New Zealand, which put Graham in a difficult position - should he go with the show or continue his medical training? After explaining his predicament to the Queen Mother - as secretary of the student's union, Graham got to meet her when she came to Bart's to open a new building - he interpreted her comment, 'It's a beautiful place. You must go' as a Royal command and deferred his medical studies for a year. After returning to medicine - not to mention performing in cabaret, and writing for television and radio - Graham started to get to know some of the other writers on TV comedy show The Frost Report, who included Michael Palin, Terry Jones and Eric Idle. Within a couple of years, Monty Python's Flying Circus had been born.

It was around the time of the Flying Circus that Graham made the decision to live with his partner, David Sherlock, with whom he remained for the rest of his life. He also started work for the 'gay liberation' campaign, co-founding Gay News in 1972. Following a television interview in which Graham discussed his homosexuality, the Python team received a letter from a woman outraged that an anonymous (not true) member of the Monty Python team had confessed to being homosexual. She enclosed several prayers for his salvation and a quotation from the Bible. The reply, written by Eric Idle, stated simply that the rest of the team had discovered who it was and had 'taken him outside and killed him'. She didn't write back.

In 1971, Graham met a runaway teenager from Liverpool called John Tomiczek, who was brought to his house with a fever. Graham treated his condition until John was well enough to go home, at which point he promptly ran away again. Eventually, Graham met John's father, with whom he got on very well. It was decided that John would stay in London as Graham and David's adopted son, much to the disgust of the local police. In later years, John became Graham's manager4.

When the third Python television series finished in 1973, the group started to turn their attention to films, despite the fact that their first feature film, And Now For Something Completely Different (1971), had not been a great success. Filming on Monty Python and the Holy Grail began in 1974, with Graham cast as King Arthur. It was at this time that Graham's alcoholism - he was drinking around three pints of gin a day - began seriously to affect his work. Trapped on a Scottish hillside with no alcohol, he began to have DTs5. Realising the seriousness of his condition, he resolved to give up drinking. His struggle is documented in his autobiography, A Liar's Autobiography, Volume VI, and by the time of arguably his greatest performance, one Brian of Nazareth, Graham had dried out.

Monty Python's Life of Brian was filmed in Tunisia in 1978, and starred Graham in the title role of the man who is mistaken for the Messiah. When he wasn't playing Brian, Graham reverted to his first career and acted as the unit doctor for the cast and crew.

Other than the various Python incarnations, Graham was involved in a number of film and television projects throughout the 1970s and 1980s. In 1976, Graham collaborated with Douglas Adams on a sketch show for the BBC called Out of the Trees. Only one episode was made, which the BBC screened once and then forgot, although it did contain a sketch based on an episode from Graham's autobiography6 and is notable for being the first time that Douglas Adams blew up the Earth. Graham and Douglas also started to write a television series for Ringo Starr, which never made it any further than the script stage. Douglas later rewrote some of the material for The Hitchhikers Guide to the Galaxy.

Just before filming started on Brian, Graham produced, co-wrote and starred in The Odd Job. The film, about a man who hires an 'odd job man' to kill him after his wife leaves him, was critically well-received, but was not a commercial success and was never released in the USA.

Graham's largest non-Python project was the film, Yellowbeard, a pirate spoof. The title role was played by Graham, and the cast also included John Cleese and Eric Idle. Unfortunately, the film did not turn out the way Graham wanted - he complained of 'losing control' as the size of the project grew - and the final product received mixed reviews.

Lectures and Other Dangerous Sports

In the 1980s, Graham carried out a number of lecture tours of American colleges. The idea for this came about by accident, while he was attending a screening of one of the Python films. The organisers told him that he was expected to speak to the audience before the film, not an experience that Graham relished. After reviewing tapes of the ensuing question and answer session, he considered the evening such a success that he decided to repeat the experience. As the tours developed, the lectures became more polished, and included Python clips, as well as details of Graham's adventures with the Dangerous Sports Club.

The first expedition, a noble failure, was an attempt to hang-glide over a volcano in Ecuador. This was followed up by a trip down a ski-run in a gondola. At least, Graham started in the gondola. Midway through the trip, Graham and his co-pilot were thrown into the air and ended up sliding down the mountain pursued by the gondola. Graham's second (and final) experience with the Dangerous Sports Club was being catapulted into the air in Hyde Park, London, by the same sort of elastic that is used to launch fighter planes from aircraft carriers...

Stop that sketch. I think it's silly.
- 'The Colonel', Monty Python's Flying Circus

In 1988, Graham was diagnosed with cancer of the tonsils. Despite treatment, the cancer spread to his spine, although Graham insisted that he would return to work. After some brief filming for the Monty Python anniversary special, Parrot Sketch Not Included, Graham was taken into hospital once more. On 4 October, 1989, the day before the 20th anniversary of the first episode of Monty Python's Flying Circus, Graham died. Terry Jones referred to Graham's timing as 'the worst case of party-pooping I've ever seen.'

Graham's memorial service was held 2 months later and was attended by his friends and family. John Cleese delivered a parody of the 'Dead Parrot Sketch' and insisted he would be the first person to say f**k at a memorial service, while Eric Idle led a rendition of the song 'Always Look on the Bright Side of Life' from The Life of Brian.

Graham Chapman has been referred to as the only genuine anarchist within Python, and the most subversive element in a group of subversive elements. It was his unique outlook on life that coloured some of Python's most surreal, most bizarre and, most importantly, funniest moments.

1A town in Leicestershire, UK, famous for its pork pies.2Where the fact that he played rugby probably counted substantially in his favour.3Later an important part of the British television satire boom of the 1960s, Frost hosted shows such as The Frost Report and That Was The Week That Was. Graham and the other Pythons got their own back a few years later by refusing to let him be part of their new Flying Circus programme...4Sadly, John died of a heart attack in 1992.5Delirium tremens - an alcohol-related psychological condition involving hallucinations and convulsions.6The 'peony severance' incident, for those who know about such things.