Terry Gilliam - Writer, Animator and Director Content from the guide to life, the universe and everything 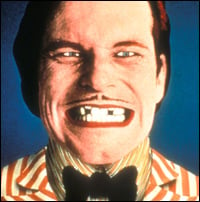 We've got lumps of it round the back
- The Jailer, Monty Python's Life of Brian

Terry Gilliam has spent much of his career being something of an outsider: he has lived for most of his life in London, UK, despite being an American; in the Monty Python team he was the one who worked alone, producing his bizarre animations; and when Hollywood finally got its hooks in him he still insisted on doing things his way, often bringing himself into conflict with the studios. But before Monty Python, and before Hollywood, there was Medicine Lake, a rural town just outside Minneapolis, where Terry was born on 22 November, 1940.

His family moved from Minnesota to southern California when Terry was 10 years old. After graduating from Birmingham High School as a straight 'A' student, a college pole-vaulter, the senior prom king and the student voted 'most likely to succeed', Terry went to Occidental College, Los Angeles. After 6 weeks as a Physics major, he changed to Fine Art, and then to Political Science.

While studying, he found he had a talent for drawing, and started working on the college magazine. In his final year at college he contacted publisher Harvey Kurtzman, who produced a humorous magazine called Help!. Kurtzman was impressed by Terry's cartoons and when a position on the magazine's editorial staff became available, Terry moved to New York. During his stay in New York, Terry met a young English actor called John Cleese, who was appearing in a revue show called Cambridge Circus. Terry persuaded John to appear in a photographic comic strip for Help!, as a man who falls in love with his daughter's doll.

After a short spell in the National Guard, Terry took a job with an advertising agency, but was fired before he could resign. It was at this point that he decided to move to England. Despite finding occasional work as an illustrator on various magazines, Terry was having trouble making a decent living. In desperation, he called John Cleese, who advised him to contact television producer Humphrey Barclay. He did so, and was offered a job as an animator on a show called Do Not Adjust Your Set, which featured Michael Palin, Terry Jones and Eric Idle. The four of them teamed up with John Cleese and writing partner Graham Chapman and Monty Python's Flying Circus was the result.

Terry's role on Flying Circus was, as mentioned, slightly different to the others. Whereas they would write sketches, present them to each other and then decide by committee what was to appear in the show, Terry was left to work on his animations alone. This meant that his work was usually presented to the group as a finished item, often at the last minute, and they had to trust him to get it right, which he invariably did.

As well as providing the opening titles for Flying Circus - with the trademark 'foot'1 - Terry's cartoons were an essential part of creating the unique look and feel of Monty Python - something that has never been duplicated. Terry also occasionally stepped in to play roles that no-one else wanted, such as the knight in armour, who popped up in the first series to hit tiresome people with a raw chicken. His finest film performances are probably in Life of Brian, in which he plays a 'blood and thunder prophet' and, most memorably, the mad, stammering jailer.

I know where to get it if you want it
- The Jailer, Monty Python's Life of Brian

Terry's first film as a director was Monty Python and the Holy Grail, which he co-directed with Terry Jones. Realising that their directing styles were not 100% compatible, the two agreed that Terry J would direct Life of Brian, while Terry G would look after the design and art department, an arrangement that seemed to work well.

Terry's next two projects were his own films Jabberwocky and Time Bandits. The former, based on Lewis Carroll's nonsense poem, starred Michael Palin as a peasant who is obliged to kill a monster. To Terry's disgust, the film was marketed in places as a new Monty Python film and was not terribly well received. Time Bandits, on the other hand, was a great success. The film, which tells the story about a young boy who meets a band of time-travelling dwarves and ends up in a fight between good and evil, has an impressive list of co-stars, including Michael Palin and John Cleese, as well as Sean Connery, Ian Holm, Ralph Richardson and David Warner. Unfortunately for Terry, Time Bandits was the last trouble-free film he was to make for some time.

The arrangement that had worked for Life of Brian, with Terry J as director and Terry G as art director, was put in place for the third and final Python film, Meaning of Life, with Terry G to provide a short piece of animation to sit in the middle of the film. Unfortunately, the 'short' piece of animation grew into a 17-minute live-action film, which was eventually shown as a prelude to the main body of Meaning of Life, bringing Terry into some conflict with the other Pythons.

The next film directed by Terry was another personal project, the nightmarish Brazil. The film is set somewhere in the future, in a world similar to that of George Orwell's 1984. British actor Jonathan Pryce plays Sam Lowry, a lowly clerk who dreams of escape from his bureaucracy-controlled life and whose best friend, played by Michael Palin, becomes his state-sanctioned torturer. Raising the necessary money for the film was a struggle, and the problems increased when the film was finished. Universal pictures were responsible for distributing the film in the USA and insisted that, at 138 minutes, it was too long. Even with a re-edited version, they were still unhappy about releasing it as they felt the ending was too downbeat. Terry had to resort to paying for a full page advertisement in Variety magazine, asking when his film was going to be released. As a result of poor promotion and support, the film was a commercial failure in the USA, although it received much critical acclaim.

The next Gilliam film was based on the legends of 'Baron Munchausen', a cavalry officer who invented tall stories, such as being swallowed by a whale or visiting the moon. The effects and sets necessary to create such a film turned out to be very expensive and the film went hugely over budget, although this was not entirely Terry's fault. Again, the studio were less than helpful in promoting and distributing the film and it was not as successful as it should have been.

For his next film, Terry decided to tackle a screenplay written by someone else. The result, The Fisher King, was nominated for four Oscars, with Mercedes Ruehl winning the award for Best Supporting Actress. Although less spectacular than Terry's earlier movies, it is still visually impressive and contains a number of Gilliam touches, including the Red Knight that is 'chasing' the down-and-out Perry (played by Robin Williams), and the ballroom sequence in which a thousand commuters in New York's Grand Central Station suddenly start dancing with each other and then, just as suddenly, stop and carry on with their lives. The film tells the story of a disc-jockey whose flippant remarks prompt a gunman to open fire on a crowded restaurant. The guilt-ridden disc-jockey, played by Jeff Bridges, becomes an alcoholic and is eventually redeemed through his encounters with Perry. After Munchausen and, to a lesser extent, Brazil, The Fisher King also represented Terry's redemption as a film director with whom studios would be happy to work.

How to Play 'Hollywood' and Win

Terry's biggest film to date is the Hollywood blockbuster, Twelve Monkeys, starring Bruce Willis and Brad Pitt. Based on short French film La Jetée, the film travels backwards in forwards in time, with Bruce Willis sent into the past to prevent the outbreak of a plague that wipes out much of the human race. The film was nominated for two Oscars, including Best Supporting Actor (Brad Pitt), and saw Terry finally taken to Hollywood's heart as an important and influential director.

Terry's most recent film, Fear and Loathing in Las Vegas, was based on the writings of S Hunter Thompson. The film, which Terry inherited and largely rewrote, generally received unfavourable reviews, although some critics considered this an inherent problem in translating Thompson's writing to the screen. The film did have its fans, however, particularly for the striking visuals - Terry's trademark. Hopefully it will not be too long before he returns to the screen with another visually impressive, thought-provoking, darkly humorous piece.

1Stolen from Bronzino's Venus and Cupid.