Michael Palin - Writer, Actor and Traveller Content from the guide to life, the universe and everything 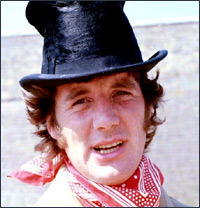 Michael Palin was born on 5 May, 1943 in Sheffield, UK. Despite not coming from a rich family, young Michael was sent to Shrewsbury private school, where British satirist and comedian Peter Cook had been a pupil some years earlier. In 1962, Michael progressed to Brasenose College, Oxford University, where he studied history.

Once at Oxford, Michael became involved with the 'Experimental Theatre Group', whose members also included future writing partner Terry Jones. The most notable of the group's productions was a revue called Hang Down Your Head and Die, a piece with a strong anti-capital punishment theme. Both Michael and Terry wrote and performed in the revue, which transferred from Oxford to London's Comedy Theatre in March 1964.

On leaving Oxford, Michael spent a brief time in Bristol, working as the presenter of Now!, a pop-music show for teenagers, before heading for London, where he performed in cabaret with Terry Jones. Spotted by television presenter/producer, David Frost, the pair started writing for various television shows. In 1967, Michael and Terry teamed up with Eric Idle and Terry Gilliam for a children's programme called Do Not Adjust Your Set, one of the direct forerunners of Monty Python's Flying Circus.

After the Flying Circus had come to an end, Michael and Terry co-wrote a one-off television show in the style of a 1920's English schoolboy story. The success of the show, 'Tomkinson's Schooldays', led to a commission for more episodes, all in the style of old-fashioned boy's adventure stories. Nine episodes of Ripping Yarns were made, six in the first series and three in the second. Each episode was a self-contained story that parodied a particular genre, including war films, murder-mysteries or 'working-class hero'-style tales. Michael played the lead role in each story, with Terry Jones working as a writer only. The show's gentle and affectionate parodying of traditional British storytelling proved popular with viewers and critics, winning the Broadcasting Press Guild Award for best comedy series in 1977.

Michael Palin is the most successful solo actor of the Python team, with many roles, both straight and comedic, to his name. His first major film role outside of Python was in Terry Gilliam's Jabberwocky, in which he plays a humble cooper who is mistaken for a prince and forced to rid the kingdom of a terrifying monster. Michael also appeared in Gilliams' next film, Time Bandits, in which he and Shelley Duval played a pair of hapless lovers whose affair is interrupted in whatever time period they happen to be.

Michael's next film role was the first that he had written outside Python. The Missionary is set in Edwardian England and tells the story of a churchman who returns from missionary work in Africa and is told by the Bishop that he is to work with the 'fallen women' of London. This subtle, low-key comedy was well received, and Michael was reunited with co-star Maggie Smith three years later in Alan Bennett's A Private Function. Set in the days of rationing after World War II, Michael's other co-star was a live pig that he has to keep hidden from the authorities so that a feast can be provided to celebrate a royal wedding.

Another call from Terry Gilliam led to Michael playing completely against type as torturer Jack Lint in Brazil, proving that he can't just play nice guys. John Cleese's A Fish Called Wanda gave Michael the chance to return to a more pythonesque role as Ken, a meek, stuttering animal lover and the cast were brought together again for the less well-received 'equal-not-sequel', Fierce Creatures.

Michael's most personal project to date is American Friends, a film based on the diaries of an ancestor who had been an Oxford Don in the 19th Century. At that time, Dons were not allowed to marry, so there was a potential scandal when Michael's ancestor fell in love with a young American woman. Eventually, the Don retired to become a country vicar and live happily with his new wife.

Proving once again that he is a 'serious' actor, Michael also played a strike-breaking schoolteacher in the television series GBH. This hard-hitting drama concerned an egotistical, militant politician and was loosely based on real individuals and events in Britain in the early-to-mid-1980s.

In the early 1990s, Michael wrote a column for a local newspaper in the Isle of Wight. He was also followed by a television crew and a short series called Palin's Column was shown on Channel 4 in 1994.

Michael has written a number of books, including the children's book, Bert Fegg's Nasty Book for Boys and Girls with Terry Jones. His own children's books are Small Harry and the Toothache Pills, The Mirrorstone, and the two 'Cyril' books, Cyril and the Dinner Party and Cyril and the House of Commons. In 1995, Michael published his first and, to date, only novel, Hemingway's Chair. The book tells the story of a postman who is obsessed with Ernest Hemingway and uses his hero as his inspiration to fight against the changes that modern business are forcing upon his post office.

Michael's most famous books, however, are those based on his travels...

All Over the World

The first journey that Michael undertook for television was a simple train journey from London to the Kyle of Lochalsh in the west of Scotland for the BBC series Great Railway Journeys of the World. When the BBC dreamed up the idea of recreating the journey of Phileas Fogg in Jules Verne's Around the World in 80 Days they again turned to Michael. Since then, Michael's travels have rarely been absent from the screen.