'And Now For Something Completely Different' - the Film Content from the guide to life, the universe and everything 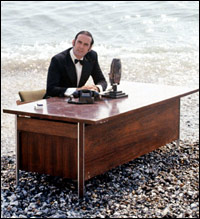 Phrases such as '...and now for something completely different' were the sort of thing said over and over again by continuity announcers in the early days of television. That particular phrase was, of course, hijacked by the 'Monty Python' team early on in the first series of Flying Circus. Although Eric Idle was the first member of the team to use it on screen, it later became firmly associated with John Cleese, whose formally-dressed BBC announcer would solemnly intone the phrase at the beginning (or in the middle... or near the end) of each episode in the second series. By the time the Pythons were preparing for their first feature film in 1970, it had become their catchphrase and was perhaps an obvious choice of title for the film.

And Now For Something Completely The Same

The film And Now For Something Completely Different was the idea of entrepreneur Victor Lownes, who convinced the group that a feature film would be the ideal way to a) introduce them to the US market; and b) make them lots of money.

Rather than writing original material, the team simply rehashed some of the most successful sketches from the first and second series of Flying Circus, and wrote a small amount of new material to link them all together. Sketches that were chosen include some of the team's most famous material, such as the 'Dead Parrot sketch', the 'Lumberjack Song' and 'Nudge Nudge'.

Although moving into new territory, the team decided to keep some familiar faces around them. Carol Cleveland appeared in the film, playing the same roles that she played in the original sketches on television, while Connie Booth repeated her role as the transvestite lumberjack's disappointed girlfriend. The Pythons also persuaded Ian MacNaughton, the director of their television programmes, to direct the film.

Credit Where Credit's Due

Production of the film did not go entirely smoothly. Lownes tried to exert a lot more control over the group than they had been used to at the BBC. In particular, he objected so strongly to one character - 'Ken Shabby'1 - that the sketch was removed. This left the film with what Michael Palin has described as 'a lot of men behind desks'.

Another argument with Lownes occurred when Terry Gilliam designed the opening credits for the film. Presenting the names of the Pythons in blocks of stone, Lownes tried to insist that his name be displayed in a similar manner. Initially, Gilliam refused but eventually he was forced to give in and, in the final version of the film, Lownes' credit is the only one that appears in that way.

They'll Never Make Their Money Back

And Now For Something Completely Different opened in the UK in 1971 and received good reviews, although the team did take some stick for releasing a collection of old sketches and referring to it as 'completely different'... When the film was released in the USA, which was, after all, the original aim of the film, it failed miserably as a result of poor publicity and distribution. This further reinforced the opinion of the team that, no matter what else happened, Python humour would never work in the States.

When Python did finally make it across the Atlantic, with the release of Holy Grail in 1975, And Now For Something Completely Different was rediscovered and continues to be enjoyed by Python fans today.

1A rather disgusting old man who earns a living cleaning toilets without a brush.