John Cleese - Comedy Writer and Actor Content from the guide to life, the universe and everything 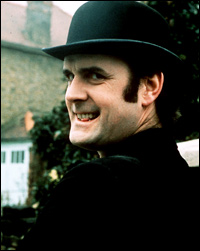 John Marwood Cleese1 was born in the small English seaside town of Weston-Super-Mare in 1939. At school, John always felt an outsider, partly because of his height (John grew to 6'4" / 193cm), but partly because he was a day-pupil in a school where most of the boys were boarders. It is perhaps this early glimpse into the workings of the English class system that led to his ability to parody it to such devastating effect later in life.

In his final year at school, John sat the entrance exam for Cambridge University. Although he passed the exam, he was forced to wait for two years, as the University was oversubscribed - compulsory military service had just been abolished in Britain and there was a surplus of young men who would otherwise have been occupied. In the meantime, John returned to his old prep school and taught mathematics.

Although his A-levels were in science subjects, John finally chose to study law at Downing College, Cambridge. Having been involved in writing and performing whilst at school, he drifted towards the Footlights comedy society. At that time, comedy revue tended to rely heavily on song and dance, neither of which could be described as John's forte. Embarrassed by his perceived shortcomings, he gave up on Footlights until invited to contribute some sketches with a friend. Their material was a success and John was allowed to join the club at the end of his first year, moving on to the committee shortly afterwards.

It was at Footlights that John met future writing-partner and co-Python, Graham Chapman. Importantly, the two of them became involved in A Clump of Plinths, the Footlights revue of 1963. The show - renamed Cambridge Circus - transferred to the Lyric Theatre in the West End of London, later toured New Zealand, and even played for three weeks on Broadway.

During his stay in the USA, John appeared in the musical Half a Sixpence, although he was ordered by the director to stand at the back and mime the words to the songs. He also tried his hand at writing about international politics for Newsweek, but was abandoned by his sponsor and, with no prospect of any training in journalism, left before he was fired. While in New York, John met two people who were to play an important part in his life and career. The first, Terry Gilliam, he met while appearing in a photo-strip in Help! magazine. The second, Connie Booth, finally married John in 1968 and their daughter Cynthia was born in 1971. John and Connie went on to co-write Fawlty Towers, but divorced amicably between the first and second series.

The Circus Starts to Fly

Before he left for New Zealand and the USA, John had worked with TV producer/presenter David Frost on influential satire show That Was The Week That Was. Returning to England, John once more hooked up with Graham Chapman to work with Frost on The Frost Report, on which Pythons-to-be Eric Idle, Terry Jones and Michael Palin were also employed. John's most fondly-remembered performances from this era are probably his 'upper-, middle- and lower- class' sketches, which he performed with comedy actors Ronnie Corbett and Ronnie Barker, later known as the 'Two Ronnies'.

As well as working for David Frost, John was also contributing to radio comedy shows including I'm Sorry, I'll Read That Again and I'm Sorry, I Haven't A Clue. On television, he and Graham Chapman were part of At Last, The 1948 Show, which was one of the major forerunners of Monty Python.

Running Away From The Circus

Monty Python's Flying Circus began in 1969 and ran smoothly for three series, until around 1971. John decided that Python was taking up too much time and, more importantly, that they were losing their originality and starting to repeat themselves. He agreed to stay with the group for the film Monty Python and the Holy Grail, but the fourth Python series went ahead without him.

In 1971, John founded 'Video Arts', a film production company specialising in business training videos, covering topics such as time management, holding effective meetings, and correct decision making. The use of humour in management training was revolutionary at the time, and Video Arts is still producing training videos today.

John's most famous post-Python achievement is the sitcom Fawlty Towers, in which he plays hapless hotel manager Basil Fawlty. The show ran for only 12 episodes and is still the standard by which British situation comedy is judged.

After the success of Fawlty Towers, John was in demand. He cropped up in many television series throughout the 1970s and 1980s. These included Doctor Who, The Goodies and Not The Nine O'Clock News. John was also a guest star on an episode of The Muppets. He performed in a variety of song and dance routines, and appeared as a pirate who threatened his parrot with the ominous phrase 'Do you want to be an ex-parrot?'

Spending some time in America, John was invited to guest-star in Cheers. He won an Emmy award for his performance as a marriage guidance counsellor. He was due to make a reappearance, but schedules could not be worked out.

Despite leaving the Flying Circus on TV, John appeared in all the subsequent Python films: Holy Grail, Life of Brian and Meaning of Life. He also appeared in plenty of films produced by his fellow Pythons - Terry Gilliam's Time Bandits, Graham Chapman's Yellowbeard, Terry Jones's Eric the Viking and Eric Idle's Splitting Heirs - and has played cameo roles in a number of other films, including Silverado, a western, The Great Muppet Caper and, almost unrecognisable in wig and false teeth, Kenneth Brannagh's Mary Shelley's Frankenstein as Victor Frankenstein's tutor.

In 1982, John appeared in his first lead film role as a puritanical but stupid army officer in Privates on Parade. This was followed by Clockwise, in which he plays the punctuality-obsessed headmaster of a comprehensive school who is invited to address the Headmasters' Conference. Unfortunately, he misses his train, after which things just get progressively more desperate as he becomes later and later.

John's most successful film to date is A Fish Called Wanda, for which he dragged veteran film director Charles Crichton out of retirement. The film tells the story of a bank robbery, with Jamie Lee-Curtis trying to seduce the whereabouts of the stolen goods out of barrister Archie, played by John. The film also starred Kevin Cline as Curtis's jealous boyfriend, and Michael Palin as a stuttering animal-lover. The follow-up to Wanda, Fierce Creatures2 featured the same cast in different roles. The film, about the takeover of a zoo by a large American company, was, however, neither as successful nor as critically well-received as Wanda.

In 2001 John appeared in Rat Race, in which he plays the owner of a Las Vegas casino who stages a race for his richest patrons to bet on, and also played 'Nearly Headless Nick' in the film Harry Potter and the Philosopher's Stone and its sequel, Harry Potter and the Chamber of Secrets.

John also flirted with the world of the action film with his appearance as lab-assistant 'R' in the James Bond film The World Is Not Enough. After the death of Desmond Llewellyn, who had played 'Q' since 1963, John took over the job as Bond's chief gadget-man in Die Another Day, the character's last appearance to date. John is also scheduled to appear in Scorched, a film about a bank robbery in which he plays a millionaire.

When John's first marriage (to Connie Booth) was breaking, up he became involved in group therapy. The experience was such a success that John teamed up with his therapist, Robin Skynner, to write a book: Families and How to Survive Them. It became a best-seller and eventually led to an similarly successful sequel, Life and How to Survive It.

In 1981, John was married for a second time, to Barbara Trentham, whom he met while in the States for Monty Python Live at the Hollywood Bowl. Another daughter, Camilla, was born in 1984, but this was followed six years later by another divorce. John's third attempt lasted for 15 years, his marriage to another American - Alyce Faye Eichelberger - ending in divorce and legal wrangling over money in May, 2008.

Facing Up to It

John's most recent television project was a BBC series about the human face. John and co-presenter Liz Hurley3 looked at the importance of the face in all aspects of human life, and even tried to find a mathematical means of describing beauty.

From his beginnings as a tall law student who just 'tried to make people laugh', John Cleese has become one of the most recognisable faces on film and television in the UK and further afield. Practically every project he has been involved in has been an unqualified success - long may it continue.

1On occasions he has claimed that his middle name is 'Otto', while his surname would have been 'Cheese' had his father not changed it just before the First World War.2Allegedly given the working title Death Fish II in reference to the ultra-violent Death Wish movies.3A model-actress-producer, famous primarily for being actor Hugh Grant's ex-girlfriend.