Almost Pythons - Important 'Monty Python' Contributors Content from the guide to life, the universe and everything

When people refer to the 'Monty Python team' they are, of course, referring to the six writer/performers who 'conceived, wrote and performed' the BBC television series Monty Python's Flying Circus and all the films, books, records and stage shows that sprang from it.

Along the way, however, many other people contributed to Python, and it is to them that this article is dedicated. 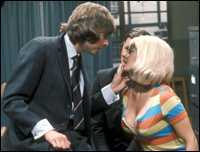 One of the first people to join the Circus, Carol appeared in all four television series, as well as all the films and stage shows. The Pythons tended to play any female parts themselves whenever they could, but Carol would always be the first choice when they needed what Michael Palin has referred to as 'real tits'.

At the time of the Flying Circus, Carol had already been involved in many television programmes, including The Saint and The Avengers, and had also worked with comedians such as Spike Milligan, Peter Sellers and the Two Ronnies. She was therefore a natural choice to work with the Pythons. Originally contracted for only four episodes, she impressed the team with her performance and they decided to keep her around.

In the television days, Carol was generally limited to playing roles in which all she was called upon to do was look 'glamorous'. As the series progressed she started to take on larger, more important roles. By the time of the third series the team were even letting her play old women, parts that they usually kept for themselves.

When the Pythons moved into film it was only natural that they should take Carol with them. In Monty Python and the Holy Grail, Carol played twin sisters 'Zoot' and 'Dingo' who, almost successfully, attempt to seduce the extremely pure Sir Galahad the Chaste. In Life of Brian she plays one of Brian's would-be disciples and is very vocal in advocating the 'way of the gourd'. In Meaning of Life, Carol originally had two roles. The first, a guest in the restaurant where Mr Creosote explodes spectacularly, remains in the film, but the second, a waitress in a Hawaiian dungeon, was cut from the final version of the film.

Neil's involvement with members of the Python team dates back to before the Flying Circus started. As a member of the Bonzo Dog (Doo Dah) Band, Neil appeared with Michael, Eric, Terry G and Terry J on Do Not Adjust Your Set, a 1960s children's television programme. When the Bonzos split up, Neil gravitated toward Python. He wrote the music for the songs that appeared in Holy Grail and also appeared in the film as Sir Robin's minstrel. After the film, John Cleese left the group to work on Fawlty Towers. As a result, the group's working practices changed slightly for their fourth television series, and Neil wrote some music for the team, as well as co-writing a couple of sketches.

Neil's standing as an 'associate Python' was increased when he appeared in the stage shows in London, New York and at the Hollywood Bowl. As well as joining in some Python sketches, including the 'Lumberjack Song' and 'Election Night Special', Neil also performed some of his own songs, including 'How Sweet to be an Idiot' and 'The Urban Spaceman'.

Outside of Python, Neil continued to work with Eric Idle, most notably on All You Need is Cash, a spoof documentary about a 1960s British band called 'The Rutles'. The songs, which bear a startling resemblance to those of 'The Beatles' without actually copying them, are a remarkable achievement. The album that accompanied the film was nominated for the 'Best Comedy Recording' Grammy in 1978.

Appearing during the television series whenever the Pythons needed a musical chorus, Fred Tomlinson and his singers made numerous important contributions to the Flying Circus. Their two most famous appearances are as the Canadian Mountie choir in the original version of the Lumberjack song, and as the group of rowdy Vikings in the 'Spam' sketch. The Singers also appeared as a group of miners in the 'Visitors' sketch1, as firemen who sing songs about Marcel Proust, and as policemen who accompany Terry Jones's 'Sergeant Duckie' in his entry for the 'Europolice Song Contest'.

One of the many unsung heroes of Python, Ian directed all but four of the Python television shows (including the German episodes) and the film And Now For Something Completely Different.

Ian's first introduction to directing comedy came when he was spotted directing an episode of Dr Finlay's Casebook2. He was thrown straight in at the deep end with Spike Milligan's programme Q, a surreal sketch show that was a major influence on the Pythons. The team decided that they wanted to steal Spike's director, and so Ian joined the team. Previous commitments meant that he was unavailable for the first four episodes of the first series, which were directed by John Howard-Davies3, although Ian directed the filmed inserts that appeared in these early shows.

Ian developed an immediate rapport with the 'visual' Pythons, Terry G, Michael and Terry J, as he understood what they were trying to achieve in terms of the look and flow of the Flying Circus shows. He also found a kindred spirit in Graham, as both men were fond of a drink4.

When the Pythons moved into feature films with Holy Grail, Terry J and Terry G decided that they would take over the direction themselves, and both have gone onto become successful directors in their own right. Both of them, however, acknowledge the enormous contribution that Ian made to Python in terms of getting the 'feel' of the show right and allowing them to develop their comedy free of the restrictions that a more conventional director might have imposed. In recognition of this, the official script books of Flying Circus5 were dedicated to Ian.

When the Flying Circus first started, Connie was married to John Cleese. As the team had little budget to play with when producing their shows, they often turned to their friends, colleagues and wives6 to help out. Connie's first Python appearance was as the sobbing, disillusioned girlfriend of Bevis the Lumberjack. She also appeared twice as a schoolgirl: once being beaten up by John Cleese's dim boxer, Ken Clean-Air-Systems, and once in a very stilted school production of Seven Brides for Seven Brothers.

When the team were writing for the two episodes they recorded for German television, Connie was roped in by John to help with the writing. Together, they wrote a fairy tale about a princess with wooden teeth, played by Connie, that also appeared on Monty Python's Previous Record. The writing partnership between John and Connie did, of course, flourish and they wrote Fawlty Towers together, one series before their divorce and one afterwards.

With Neil Innes and Connie Booth, Douglas is one of only three 'outsiders' ever to have written for Monty Python, although he always went to great lengths to point out that his contribution was minimal. To his annoyance, journalists tended to ignore this and would often credit him as a 'major Monty Python writer'. In reality, Douglas's Python writing credits consist of a sketch in the fourth series about a doctor whose patients are stabbed by his nurse, and a heavily rewritten sketch that appeared on the Holy Grail soundtrack album about a film director who has dug up Marilyn Monroe to star in his latest film. Douglas also appeared on screen in the fourth Python series, as a housewife in a sketch about a rag-and-bone man selling nuclear missiles, and as a surgeon in a sketch that never gets started.

And a Cast of Some

Those listed above are, of course, not the only people to have made a contribution to the success of Python. From those who influenced the style of Python comedy - Spike Milligan in particular - to the behind the scenes crew of the television series, to all those who worked on and appeared in the films, an enormous number of people did their bit to ensure that the six Pythons could create the comedy that made them famous and keeps people talking and writing Guide entries about them more than 30 years on.