Terry Jones - Writer, Director and Actor Content from the guide to life, the universe and everything 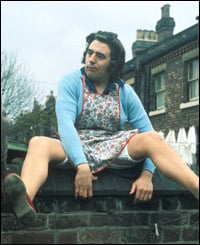 Although he is best known as a member of the Monty Python team, Terry Jones is also a distinguished film director, children's books writer, television presenter and historian - a wide range of talents, even for an ex-Python.

Terry was born in Colwyn Bay, North Wales in 1942. Despite leaving Wales and moving to south-east England while a young boy, Terry has remained firmly and passionately Welsh.

From Oxford to London

After leaving school, Terry studied English at St Edmund Hall, Oxford University. Although he was strongly discouraged from acting by his school headmaster, he became involved in drama at the University. In his final year he co-wrote a revue about capital punishment called Hang Down Your Head and Die, on which one of the other writers was future writing partner, Michael Palin.

Moving from Oxford to London at the end of his degree, Terry started working for BBC Light Entertainment, where he gradually started writing sketches. Eventually, he and Michael ended up working on The Frost Report, an influential comedy programme of the 1960s, for which John Cleese, Graham Chapman and Eric Idle also wrote material.

Two programmes written and performed by Terry and Michael were particularly influential in the coming together of the Monty Python team. The first was The Complete and Utter History of Britain, a show in which great moments from history were re-enacted as though television cameras were there. Sadly, only a small part of these programmes remain, as the original videos were 'wiped' and reused1 as part of a BBC economy drive. The second programme was Do Not Adjust Your Set, which also featured Eric Idle, along with Neil Innes and the Bonzo Dog (Doo Dah) Band, and contained animations drawn by Terry Gilliam.

On the strength of these two shows, John Cleese decided that he would like to work with Terry and Michael. Add in the other ingredients, and Monty Python's Flying Circus was born.

From Circuses to Yarns

In the early days of the Flying Circus, Terry was the one most concerned with getting the look and 'feel' of the programmes right, which included linking sketches together in a 'stream of consciousness' form without defined beginnings, middles and ends. This often brought him into conflict with John Cleese, whose preference was for logical, structured, verbal sketches. The Pythons, including Terry and John themselves, have often noted that this conflict created the charged atmosphere in which the whole team could produce the work that was to make them famous.

When John left Python after the third series, Terry's obsession with form began to dominate, with sketches becoming longer and longer, eventually taking up entire episodes. This format eventually evolved into the Ripping Yarns series, which he co-wrote with Michael, and which won the Broadcasting Press Guild Award for best comedy series in 1977.

From Arthur to Rupert

Terry's career as a film director began with Monty Python and the Holy Grail in 1974, on which he shared directorial duties with Terry Gilliam. Realising that their styles were very different, the two agreed that the next two Python films, Life of Brian and Meaning of Life, would be directed by Terry J alone, with Terry G looking after the design and artwork.

Outside of Python, Terry's directing credits include The Saga of Erik the Viking (based on his own book), Personal Services, a biography of English brothel-keeper Cynthia Payne, and most recently his own adaptation of The Wind In The Willows. He has also directed for television, tackling an episode of Young Indiana Jones Chronicles for George Lucas, and producing a documentary about one of his favourite childhood cartoon characters, 'Rupert the Bear'.

From Vikings to Knights

Terry's writing credits are many and varied. As well as the screenplays for Erik the Viking and Wind in the Willows, he also wrote early drafts of the film Labyrinth, although only traces of his original remain. He has also written children's books, including Bert Fegg's Nasty Book for Boys and Girls with Michael Palin, Fairy Tales2, Nicobobinus and Fantastic Stories, as well as a collection of children's poetry called The Curse of the Vampire Socks. More recently, Terry wrote the novel adapted from Douglas Adams' computer game Starship Titanic.

In a more serious vein, Terry also wrote Chaucer's Knight: Portrait of a Medieval Mercenary, a scholarly study of one of Chaucer's Canterbury Tales. In it, Terry presented a radical re-interpretation of The Knight's Tale, in which he presented the Knight, not as a chivalrous, gallant individual, but as a bloodthirsty crusader. This brought a certain amount of derision from some, rather insecure, academics, whose opinion was along the lines of 'how dare this comedian trespass on our territory?' Fortunately, Terry's thick skin and his academic credentials were more than equal to the challenge. Not to be deterred, his interest in this period of history led to his presenting a television series on The Crusades.

As if all this wasn't enough, Terry also wrote a column in the Guardian newspaper, which was later published as Attacks of Opinion, and has presented a literary television show called Paperbacks.

From Monsters to Toads

With all this writing and directing, Terry has had little time for acting, but does have a few film roles to his name. He had a very brief part in Terry Gilliam's Jabberwocky, being eaten by the eponymous monster in the opening moments of the film. He also appeared in Erik the Viking and played 'Toad of Toad Hall' in Wind in the Willows. On television, he appeared in the BBC series The Young Ones, playing a drunken vicar.

Terry's name will no doubt crop up again soon. Whether it is in front of or behind the camera, in print, or somewhere else entirely, the project will no doubt be imbued with Terry's legendary and relentless enthusiasm.

1Along with hundreds of episodes of other television series of the time2Which was adapted for television, winning an Emmy award.