Getting to the Isle of Wight, England, UK Content from the guide to life, the universe and everything 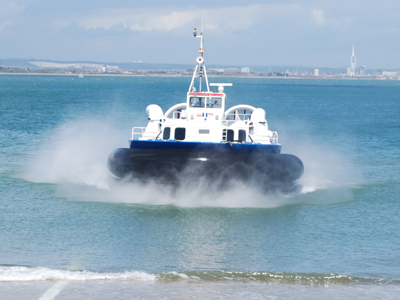 The Isle of Wight is one of England's most beautiful areas, situated at the central southern point off the coast. It is well worth a visit, but of course, before you can go there, you need to know how.

Unless you are lucky enough to own either your own boat or plane, the only way to get to the island is to cross the Solent1, and there are three ferry companies carrying passengers on 6 different ferry routes to and from the mainland.

The Southampton Isle of Wight and South of England Royal Mail Steam Packet Public Limited Company - or 'Red Funnel' for short - was formed in 1861. The company is the original operator to the Isle of Wight having operated for almost 140 years2. It was formed when two companies, established in the 1820s, merged.

Cowes and East Cowes are on the northern edge of the Isle of Wight, and are on opposite sides of the River Medina. Both can be reached from Newport, the island's capital. There is also a 'Floating Bridge' Chain Ferry that operates between Cowes and East Cowes, which runs every 15-20 minutes until midnight. Fares are very cheap - free for passengers, and crossing is a pleasant experience that does not take long.

Crossing on Red Funnel's three passenger ferries, the Red Eagle, Red Falcon and Red Osprey, is a very pleasant experience. They were introduced to the island between 1994 and 1996, and can carry up to 140 cars and 895 passengers. They have a lounge, toilets, catering facilities, on-board shop, sheltered sun decks and a bar - the journey takes about 55 minutes.

Prices, though, are a little expensive. At the time of writing, a passenger 90 day return costs £8, but a typical car return is £61.50, but there are often special offers and reductions. If you are planning on taking a car, booking is also advisable. The services are usually hourly, leaving on the hour from Southampton, and half past the hour from East Cowes - but if travelling late or on weekends, it is best to check the times on their website.

Red Funnel has three catamarans on service too, imaginatively named Red Jet 1, Red Jet 2 and Red Jet 3. They also have two hydrofoils, Shearwater 5 and Shearwater 6 as a back-up, but they are very rarely used now. Red Jets 1 & 2 were built in 1991 and can carry 138 passengers, Red Jet 3 is a more modern design, was built in 1998, and can carry up to 187 passengers. The Shearwaters were built in the early 1980s, and both carry up to 67 passengers, but the crossing is more enjoyable. Crossing time is approximately 22 minutes. Again, at the time of writing, an adult 90 day return costs £12, and they will also carry dogs. Sadly, though, they do not let bicycles on board.

Wightlink is the largest ferry company on the Isle of Wight. There have been ferries on the routes since the late 19th Century, and the routes were owned by rail companies. Ownership of the ferries eventually passed from the British Railways Board to Sealink UK Ltd. In 1984 Sealink UK Ltd was de-nationalised and became Sealink British Ferries, and was bought by Sea Containers Limited.

In 1990,Stena Line was bought by Sealink British Ferries, but Isle of Wight Ferries remained with Sea Containers, who renamed the company Wightlink. In June, 1995, as the subject of a Management buy-in, it became a private and independent company.

Getting to the ferry is easy. The Wightlink car ferry terminal at Portsmouth can be reached via the M27/A27 and M275. For the Lymington terminal, leave the M27 at junction I and take the A355 via Lyndhurst. Rail access is also early, as trains to Portsmouth Harbour and Lymington Pier take passengers direct to the door of Wightlink's ferry terminals.

There are two passenger catamarans, Our Lady Pamela and Our Lady Patricia, both built in 1986. They can carry up to 410 passengers, and make the crossing in approximately 15 minutes. At the time of writing, a standard adult fare is £8.40, and is valid for a year, and you do not have to book in advance. Bikes may also be carried. Services are usually hourly, except at peak times when there are two an hour.

The ferry leaves Portsmouth from the Portsmouth Harbour railway station, and arrives at the 'wet end' of Ryde Pier, where the Island Line train is waiting. You can book tickets as part of a rail journey - for timetables to Portsmouth Harbour, see the Rail website.

Getting to Ryde Pier Head is easy. Ryde is the largest town on the island, and is on the north-eastern shore, with roads to Cowes, Newport and Sandown. Train services also run to the ferry terminal on the mile-long Ryde Pier from Shanklin, Sandown, Lake, Brading, Smallbrook Junction, Ryde St Johns, and Ryde Esplanade at the base of the pier, where you'll find the Southern Vectis bus station and the Hovercraft terminal.

This is the main route to the Isle of Wight, and there are four ferries that operate it: St Catherine, St Helen , St Cecilia and St Faith. St Catherine and St Helen were built in 1983, St Cecilia was built in 1986, and St Faith was built in 1990. They can carry 142 cars, and 771 passengers each. On board, there are bar and buffet facilities, toilets, lounges, observation decks and passenger lifts from the car decks to the lounge. The journey takes 35 minutes.

Fishbourne is a small village to the west of Ryde, and the route there is well signposted. There is a ferry every half an hour, except at off-peak times, prices are £8.40 for a passenger return, valid for a year, and £59.60 for a car return. However, reduced fares are available. It is also recommended that if you are taking a car, you should book in advance.

There are three ferries that travel on the western route between Lymington and Yarmouth - Caedmon, Cenred and Cenwulf, all of which were built in 1973. They can carry up to 58 cars and 512 passengers, and offer buffet/bar facilities, toilets, a lounge and observation deck seating. The journey is 30 minutes long.

Getting to Yarmouth is easy - all you have to do is head west from Newport. There is usually two ferries an hour, except during the winter, and prices are the same as Portsmouth - Fishbourne. Foot passengers are welcome, but again if you are taking a car, booking in advance is recommended.

Hovertravel is the world's longest established commercial hovercraft operator4. Operations commenced on 24 July, 1965, using an SRN65 hovercraft which carried just 38 passengers. Two modern 98-seat hovercraft now run between Ryde and Southsea, and over 16 million passengers have used the service to date. It is also the fastest way to cross the Solent, as the journey lasts only 10 minutes. It's also by far the most exciting.

It operates only the one route between Southsea, which is just outside Portsmouth, and Ryde Esplanade, crossing Ryde Sands.

You do not normally need to book, but if you want to contact Hovertravel, then look at the Hovertravel website.

There are regular bus services from both Portsmouth shopping centre and Portsmouth and Southsea train station, one to meet each Hovercraft. From Ryde Esplanade you can catch an Island Line train to Shanklin, Lake, Sandown, Brading, Smallbrook Junction, or Ryde St Johns, or travel up to Ryde Pier and the catamaran there, or you can use Ryde's Southern Vectis bus station.

There is a hovercraft every half hour, and fares for an adult period return are £10.40, again at time of writing. Saver fares are also available for frequent users.

1The Solent is a stretch of water that separates the mainland from the Isle of Wight.2Red Funnel's registered name is the longest on the Companies House Register.3The M27 and M3 lead to Southampton, as does the A35 and A274Sir Christopher Cockerell invented the Hovercraft on the Isle of Wight in 1959.5The SRN6 was nicknamed 'Super-noiseless' after the deafening roar it created.