The Parts of an Acoustic Guitar Content from the guide to life, the universe and everything 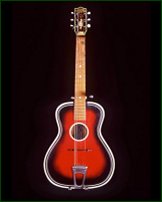 Most people know that a guitar is a musical instrument. There are some, however, that make a distinction between classical and acoustic guitars; the former being the typical guitar used in classic concertos, using nylon or, more rarely, catgut1 strings, and the latter being the one with steel strings (also often called 'folk' guitar), which are more commonly seen in 'country' music concerts. In this Entry the term 'acoustic guitar' is used as an umbrella term comprising both classical and folk guitars, as well as any other types of guitar (eg, ukulele and bass). All acoustic guitars are nearly identical as far as the working mechanisms and their build-up are concerned. Similarly, the nomenclature for the individual guitar parts is the same.

Since it is the most common and basic form of guitar, the classical model will be used in this Entry to illustrate the build-up of a generic acoustic guitar. The author of this Entry has prepared a schematic illustration to guide the reader - it can be found here: guitar schematics.

The Parts of a Guitar

The three parts are mainly made of wood, although some modern guitars are made of metal, plastic or kevlar fibres. The main advantage of wood lies in the timbre or the tone it generates. Wood absorbs a certain range of sounds (very high frequencies) thus giving the sound a typical nuance often described as 'warm' or 'round' - guitars made of metal, in contrast, reflect high sound frequencies and have a sound often characterised as 'brittle' or 'sharp'.

The body of a guitar consists of many parts. The body itself, the resonator or the hollow box, is called the soundboard, and it has an opening called the soundhole (sometimes round and underneath the strings, sometimes f-shaped and besides the strings like in a violin). The guitar body also has a typical shape with a waist in the middle part, which is used to place the guitar on the player's knee. The parts above and below the waist are called the upper and the lower bouts. The bridge and the saddle are also placed on the top of the body and are used to hold the strings.

The shape of the body will have an influence on its resonance properties. This has a similar effect on the timbre as the choice of different materials, which was previously discussed. Round shapes tend to be more effective resonators for the low frequencies and generate a tone often described as 'smooth' or 'warm', whereas edgy designs generate more overtones and give a timbre described as 'colourful'. Round resonators, being better resonators, also give more 'sustain' to the notes, ie, they hold the vibration for a longer time and the note takes longer to fade out, whereas more edgy bodies give less 'sustain' and are said to have more 'attack'.

The bridge is just a thing to fix the strings and has almost no influence on the tone of the guitar. The saddle is a piece of plastic, wood or metal used to hold the string at a certain distance from the body; it is usually a part of the bridge. The saddle is an important piece of the guitar and must be carefully calibrated by the guitar manufacturer; a misadjusted saddle makes it impossible to tune a guitar properly and can cause the strings to touch parts of the neck giving it a horrible noisy sound.

The neck is the part which the player uses to finger the notes2; the front part of the neck is therefore also called the fingerboard (sometimes also 'fretboard') and it is usually subdivided by small pieces of metal called frets (some guitars - for example some bass guitars - lack frets, like violins, and are thus referred to as 'fretless'). The part connecting the neck to the head is the counterpart of the saddle on the bridge and is called the nut. The nut holds the strings at a certain distance from the frets and must be carefully adjusted by the guitar manufacturer.

The function of the frets is to hold the string at different lengths when the finger of the player presses the string down in front of the fret. This is what generates the different notes on a string. To guide the players, the frets can also be enumerated starting from the nut. The position in front of the 3rd, 5th, 7th, 9th and 12th frets are often, but not always, marked with a small circle, called inlay.

The function of the head is to hold the strings under a certain tension, which is directly related to the string's tuning. Each string is wrapped around a cylinder, which can be turned via a worm gear3 by the tuning heads, causing more or less tension on the string.

When buying an acoustic guitar one should pay attention to many parameters, such as the sound quality, the design and the craftmanship. It is also important to know what every part of the guitar does. Very important, for example, are the settings of the bridge and the nut. If they are well calibrated by the manufacturer the notes on the strings will scale exactly with the positions of the frets. The 12th fret, for example, will divide the strings exactly in half. An easy way to test this, is to check whether the open note and the note on the 12th fret have the same pitch but are one octave apart. If the bridge is too far away, for instance, the 12th fret will not entirely divide the string in halves and the tone will be less than one octave higher (this can easily be heard, or tested with guitar tuning instruments). This test should be passed by all strings. Misadjusted bridges and nuts are particularly bad on guitars that do not allow adjustments on the bridge, such as most classical guitars. Another important adjustment is the distance of the strings to the frets: there should be no muting or noises coming from the strings touching the frets, while at the same time the height of the strings above the fret should be kept at a minimum.

1Which - in contradiction to the name - are made of sheep intestine.2Usually the right-handed players use the left hand.3Worm gears can turn the cylinder, but the cylinder cannot turn the worm gear - in this way the string can be held at a high tension without unwinding.