Familiars Content from the guide to life, the universe and everything 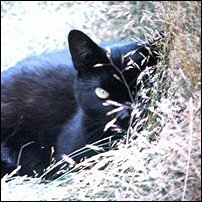 Widely associated with witches and Witchcraft, a familiar can take many forms, most commonly that of an animal. Followers of many spiritual practices such as Shamanism and paganism also use animals as believed companions and guides. But why, and what animals may be used?

What do Familiars do?

Some believe that we can have a close affinity with a particular animal. This creature, either in physical form, such as a house pet, or a spirit animal becomes the person's close companion and spiritual guide. The animal may appear in the owner's dreams or may be conversed with during meditation and visualisation. Some witches and pagans use their familiar to help them with magic and ritual, though it is unclear quite how the animal is of assistance.

Today it is not thought strange for someone to be overly affectionate with their pet cat, dog or even snake, but in the times when it was common to be tried and executed for Witchcraft, people had to be a lot more careful. Attachment to an animal could be used as evidence against someone in those times. Familiars were believed by the persecutors to be gifts from Satan who gave the witch his orders. Familiars were often killed along with their owners.

It is believed that some animals make better familiars than others, but it is really down to the individual person's choice. They may feel drawn to a particular creature above all others.

Cats are extremely popular choices; in fact it was once believed that witches could transform themselves into cats. They are linked to fertility, the moon and feminine wiles. Other popular 'Moon' animals, as in nocturnal animals or those connected with the Moon's qualities such as femininity1, are the toad, the dog and the hedgehog. Less common choices are the fox, the snake and even the baboon.

Many of us may have a familiar and have not even realised it. The dog that won't leave your side, the cat that loves you to bits - these are as much familiars to us as the stereotypical witch's toad.

1In many Pagan belief systems the Moon is female energy and the Sun is male.