Mandolin Jones Content from the guide to life, the universe and everything 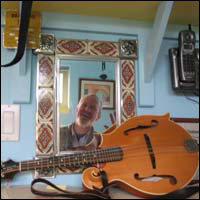 It's not a proper name, so far as we know. Rather, a Mandolin Jones1 is what happens when bits of wood and lengths of string are put together in just such a way that they completely take over your life.

Consider that, although technically the mandolin has eight strings, they're paired, meaning there are really only four notes to keep track of at any given time - so it's simpler than a guitar. Plus, it's got frets and all you have to do is start strumming to get a reasonably pleasant sound right away - so compared to the violin there's immediate gratification. Not to mention it's got more class than some other four-stringed instruments like the ukulele. Add to that it's small enough to cradle in your arms - awww, isn't it cute? Who could resist? You?

The good news about a Mandolin Jones is that it's a benign affliction. The bad news is, it can take hold after even your first exposure. So now what?

Yes, there's no getting around it - you must pick a mandolin. Ahh, but what kind? Well, here's what you must do - you must try them all. This means visiting your local music emporium and devoting hours to the task. Also, find people that you are at least acquainted with who own a mandolin and prise it from their white-knuckled fingers. Be polite but firm. Also, be prepared to give it back to them when they start really whining - not to do so is considered very bad form.

Now then, should your mandolin be new or used? Used, of course - certainly at least by you. The mandolin is not an appliance that wears out. It is a live thing that needs exercise and only improves with lots of it. Plus, used instruments are generally less expensive so even with beginner's money, you ought to be able to find an expert's instrument. Find one that really speaks to you. (Not out loud, of course - if you are hearing an actual voice it is probably the current owner whining for you to give their mandolin back.)

On a slightly different note, picking a mandolin requires a plectrum. Always keep at least one in your pocket as you never know where you'll find a mandolin. In fact, keep several so that when there's no mandolin handy you can at least enjoy tiddlywinks. The stiffest plectrums that you can find made of the thickest plastic are the best for both uses.

The first adjustment you will need to make is to get all the strings vibrating harmoniously. That is, they must be in tune. If there's a piano handy and it's in tune then you've got a good start. Beginning with the fattest strings and working up to the thinnest, the standard tuning for the mandolin is G D A E. So, tap a G on the piano and start twisting those two of the fiddly-looking knobs at the top of the neck corresponding to the fattest pair of strings until these sound the same note. Then tap a D on the piano and fiddle with the D strings and so on through the A and E strings. When you've got it right, you should be able to pluck any of the pairs of strings and they will sound like one string - if they're slightly out of sync you'll hear the volume rise and lower as they alternately complement and then cancel each other - a little like the buzzing of cicadas.

A slightly better and more portable alternative to the piano is the tuning fork. You only need one, preferably a G, D, A or E. Tap it on something other than the mandolin to get it ringing and then hold the base to the bridge so that the mandolin amplifies the sound. (The bridge is that thing sticking up from the body that you've been parking your hand on while plucking the strings). If the fork is a G, for example, then when you've got the two G strings adjusted, they'll vibrate from the fork without your plucking them. Now tune each of the remaining strings relative to the G, as in this case, by alternately pressing the seventh fret of each. Start by pressing the seventh fret of the G strings to make a D note, which is what adjacent thinner strings should be. Then press the seventh fret of the D strings to make an A note and tune the A's. Then do the same with the A's to tune the E's. (Just try it and it'll make sense.) Or, you can purchase an electronic tuner and have the person at the shop show you how to use it. The advantage of the last two methods is that you end up with the mandolin in concert pitch which means that you can play along with songs you hear on the radio or on CD. More about this later.

Suppose that you've carefully tuned your instrument, but it just doesn't sound right - a little dull maybe - or perhaps it still seems out of tune as you press on the frets. Assuming that the neck is straight and the action (the height of the strings above the neck) is proper, then the problem may be in the placement of the bridge. The bridge is movable, making this the most likely cause for a poor sound. Only follow these simple detailed instructions to ensure that the bridge is positioned correctly.

A word of warning: strings that are in tune and a bridge that is in trim are like heroin to the junkie. Stop now, or you are well and truly lost. Continue, and you will surely...

We have no idea what this means.

If there is such a thing as enough music, then one can only know it by playing too much and this has never happened to our knowledge.

On second thought, here's the exception. Prisons are surely full of people that were forced at an early age to play 'Chopsticks' over and over again. It's important when you are first learning to play that you stick to music you like.

Music is a drug and the mandolin is a delivery device. Will you play it by ear, or will you face the music?

If you will only play it by ear, then you may be somewhat handicapped because there's just a ton of great music, particularly classical, that you don't often hear, but that can be found written down in musical notation. This is sometimes called the 'hard stuff'.

On the other hand, if you only read music, then you may be somewhat handicapped because there's lots of music, particularly in the folk or bluegrass genres, that isn't written down and has to be learned by ear. Fortunately, a large percentage is made up of fairly standard chords, runs and licks and so with only a few of these in your pocket you can play all night and cheaply too.

You really ought to try both - whichever is more difficult for you may be the best one to concentrate on. If you want to read music, then you must read music - there are good books available on the subject. The key is to practise until you can directly map the dot on the page to the finger position on the neck without consciously performing the intermediate mental conversion. (Oh, stop pouting - it's good for you.)

For the music reader, playing by ear may be perceived as a little like walking in the gutter. There's nothing for it but to take off your shoes and step in (no wellies please).

Some people try half-measures - these are called tablatures. They will give you the notes to play, but you won't have any idea how the song is supposed to sound - whether fast or slow, or if this note is long and that one is short - and so you will have to have heard it played before the tablature is useful.

This is easier than you might think. According to musician John Hartford, what we call a person's style is just another word for their limitations. Consider Chubby Wise, the famous bluegrass fiddle player. He was known for his soulful way of sliding up and down the neck to reach different notes. In fact, he was what's known as a three-fingered player and instead of hammering down with the pinkie like most fiddle players would, he just slid his ring finger into position. What this means then is that those difficult musical changes that you kind of fake-in because perhaps you're feeling a little lazy, others may see as really defining your style, which is a good thing.

Beginners will tend to try and slug down a great lot of notes as quickly as they can. Remember that time was invented so that everything doesn't happen all at once, and timepieces were invented to keep time. Here, for the playing of music, we are referring to metronomes. They can often be found at flea-markets and car boot sales, and software versions can also be found and freely downloaded from the Internet though this will be left as an exercise for the reader. Once you've got one, get used to using it.

For some reason, even playing scales to the regular tick of a metronome is enough to induce a pleasant meditative state that is only slightly marred by occasional drooling. If you do find drool on your chin just know that you're not alone in this. In fact, ask anyone in an orchestra about drooling and they will immediately point to the viola players, but it's something that happens to everyone at some time. It's just a symptom of the Jones.

You can too easily become isolated, spending hour after hour up in your room playing note after note alone and oblivious even if the house were burning down around you. You must learn to play socially. This is actually pretty easy since there are so many others just like you.

Nothing more is needed than to take your mandolin out to the park and start playing. This is irresistible to others with your affliction and, in no time at all, along will come Banjo Jones, Guitar Jones, Harmonica Jones and now look at you. You're keeping up with the Joneses.

1A 'Jones' is an addiction in the vernacular.