Banjos Content from the guide to life, the universe and everything 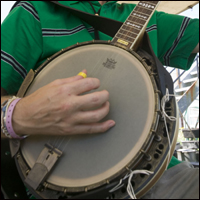 Few instruments elicit as much controversy, or as many strong emotions, as the banjo. Once far more popular than the guitar, the banjo in the last 80 years has slid into relative obscurity, relegated to country and folk music, old jazz bands, the Mummers1, and rock/pop musicians who are subsequently labelled 'eclectic'2 for using it. For some, the sound of banjo is like that of the Sirens3; for others, the sound of the banjo is like that of a siren.

Structurally, the banjo is something like a cross between a drum and a guitar. A simple instrument, the body (actually called the 'head', as drums are) is really just a membrane of skin or plastic stretched over a circular frame of wood, metal, or some combination of the two. Bolted to the head is the neck, which ends in the pegs. The neck commonly has frets on it, but occasionally fretless banjos can be found. They are played with steel or nylon strings. Some banjos have an open back, in which case most of the sound travels directly into the player's belly. Other banjos are equipped with a resonator, an object affixed to the head that looks somewhat like a wooden frisbee. The resonator captures the sound before it enters the player's person and redirects it outwards, towards an appreciative, or not-so-appreciative, audience.

A Brief History of the Banjo

The banjo is an African instrument. Europeans who beheld it in Africa didn't know quite what to make of it, even though the form of the instrument appears in many other cultures. The first banjos to arrive in America came along with the slave trade. Because the slaves were not allowed to play drums, they made their banjos from gourds, hollowing it out, cutting off the top third, and stretching over it the skin of a groundhog, goat, or cat. The banjos had three or four strings made of gut, twine, or hemp, and were always fretless.

The banjo, along with the fiddle, was initially disdained by upper-crust white society, until the rise of the blackface minstrel show in the 1830s. As minstrel music caught on, so did the banjo, now a five-string instrument but still fretless. Music for banjo, fiddle, and percussion had its heyday in the mid-1800s and so spread across America and abroad. Testimony to the banjo's popularity at this time comes from a banjo contest held in October of 1857 in New York City. So many people attended that they could not fit into the music hall, and the contest was almost drowned out by audience members' constant shouting in support of their favourite player.

In the 1880s, the banjo moved into high society as a ladies' instrument. It was given frets and tuned differently. In response to its 'legitimization', banjo manufacturers created a whole range of instruments based on the banjo's structure. After a brief stint in classical orchestras, the banjo made its way into the jazz bands of the 1920s before receding from popular and elite culture. Meanwhile, the style of playing the banjo from the 1800s, with fiddle, bass, guitar, and percussion, continued unabated in rural areas all over. It was that rural style that was developed into bluegrass in the 1940s and '50s.

When many people think of a banjo, they are thinking of the five-stringed variety. Descended from the fretless minstrel banjo, the five-stringed banjo is popular in American and Irish music. It is usually tuned to open chords or a slight variation on an open chord. Four of the strings run the length of the neck and are used to create the melody or chords; the fifth string is considered a drone string, and it is generally struck only to fill out the banjo's sound.

The tenor banjo enjoyed rapid popularity as a staple of a jazz rhythm section. Lacking the drone, it has four strings which are usually tuned in fifths (eg G, D, A, E, from the lowest pitch to the highest). It is a smaller instrument than the five-string.

As mentioned above, banjo makers created banjos of all shapes and sizes, and today we can see the result of their experiments in acoustic instrument stores, Salvation Armies, antique stores, and pawn shops everywhere. Besides the five-string and tenor banjo, there is the banjolin, a cross between a banjo and a mandolin, the banjo ukulele, the piccolo banjo, and the banjo cello, which is basically a gigantic banjo in the range of the cello. Some maniacs have gone so far as construct banjo basses, which are basically kick drums with a neck screwed on and strings across it. These instruments are fairly rare.

How to Play the Banjo

In keeping with its long history, a number of different styles have developed for playing this unruly instrument.

Many banjo players, especially those who use the banjo primarily as a rhythm instrument, use a pick or plectrum to strum the banjo or pluck out a melody. The pick is often employed by jazz players, the Mummers, and Irish musicians. It produces a loud, sharp sound, particularly in the case of Irish players.

To play in a three-fingered picking style, the player usually attaches small metal picks to the ends of his pointer and middle fingers, and a plastic pick to his thumb. The combination of the three fingers allows the player to switch easily from rhythm to melody, and more impressively, allows him to play a melody with rhythmic accompaniment all by himself. The result of his efforts is the rolling, melodic sound one usually associates with the banjo. The three-fingered picking style is perhaps the style most banjo players employ; it is found in bluegrass, Irish music, country music, and Western folk music generally. It is commonly known as Scruggs-style playing, after Earl Scruggs, the man who employed it to great effect and virtually invented bluegrass banjo playing.

To play this in the 'clawhammer' or 'frailing' style, the player uses his thumb and the nail of his middle finger to create melodies and rhythms on the instrument. The sound is reminiscent of that of bluegrass playing, but is duller, deeper, and more percussive. The style - derived from the original African way of playing - was extremely popular in the 1800s, but has since become much more uncommon. It is now employed most commonly in American old-time music, and some Irish music as well.

1The Mummers are a hybrid of a banjo orchestra and a marching band. Picture a horde of tenor banjos strumming mightily while a pack of horns, woodwinds, drums, and glockenspiels belt out John Phillip Sousa marches and songs like 'Be Kind to your Web-Footed Friends'.2Such bands include REM, Dave Matthews Band, Moxy Fruvous, Bela Fleck and the Flecktones, The Magnetic Fields, Tom Waits, and Funkadelic.3The Sirens were the ladies of the sea who used to sing beautiful songs that would lure sailors to their deaths.