The Jungle, Cleethorpes, NE Lincolnshire, UK Content from the guide to life, the universe and everything 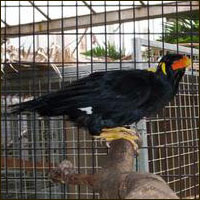 The Jungle is one of the main attractions in Cleethorpes and features prominently in the town's Tourist Guide. Admittance is inexpensive and the creatures within will delight both children and grown-ups. The main building is a huge greenhouse, which houses caged snakes, spiders, birds, lizards and other small animals in a recreated tropical rainforest environment. There is an outside area where you can feed more docile animals. The Jungle is also a rescue centre, providing homes for exotic animals which have been donated or abandoned by previous owners.

Allow £3 per adult and £2 per child1 entrance fee, although they do give discounts for larger parties and money-off vouchers can be obtained from the Tourist Information Centre on Alexandra Road. Once you have your tickets you will be invited to purchase two packets of food2 for the animals, at approximately 30p per bag.

Be aware that the environment inside The Jungle is hot and clammy. The first cages you pass contain parrots, toucans and various other exotic birds. Allowed to roam loose inside is a giant tortoise ('Molly'), who is over a hundred years old, so watch where you are stepping.

The most popular attraction is the family group of almost unbearably cute meerkats. In 2004 one of the females produced a batch of pups, news of which made the local press. They live behind bars, but you will be able to view them better (and feed them peanuts) after you have gone outside (if they come out to dig).

Watch out for the mynah bird who swears at you as you pass. Laugh at his reaction when you wolf-whistle back. Also beware of the cheeky male parrot ('Becks') who has a zip fetish. He can poke his head through the bars of his cage far enough to reach unsuspecting passers-by. His antics really annoy his partner ('Posh') and she makes her displeasure heard.

The tropical vegetation is quite lush and thick. It overhangs a central pond containing fish, turtles and terrapins, and appears to have been taken over by some opportunist local wild birds, namely sparrows. Going outside, you pass through a thick membrane, which protects the indoor atmosphere, and into the garden.

You'll pass cages of budgerigars, lovebirds and parakeets on your way into the garden. Lots of chipmunks run around the inside of their cage extremely fast and won't stop to pose for a photo no matter how many sunflower seeds you try to bribe them with. The white streak of lightning you can see flashing past is the albino chipmunk.

There is one solitary monkey in a large cage, which has a warning sign attached stating 'This animal bites', so you have been warned. You will end up feeling sorry for this poor creature, as he looks lonely and bored. Next to him, a large white parrot tries hard to impress as he turns himself upside down while still clinging to the front bars of his cage. Small boys like to attempt to imitate this behaviour but don't quite manage it before falling over.

Big, fat guinea pigs chase each other around their pens, while plump sparrows dive in and out stealing their food. In the next pen are goats, who stand on their hind legs in their eagerness to relieve you of your bag of animal feed. The raccoons will ignore you completely; their energy levels appear to be the opposite of the chipmunks.

If the meerkats come out to play, you'll recognise the familiar stance as one stands guard, keeping watch for eagles and hawks. The others dig holes in the sand. Offer them a monkey nut but beware of their sharp claws. The latest addition to The Jungle's menagerie, a new attraction for 2005, is a family of ring-tailed lemurs who live in a large outdoor cage.

On the way out

Like spiders (the bird-eating kind) and snakes (the boa-constrictor kind) do you? Alligators? Monitor lizards? They're all here, safely behind glass. Don't forget the iguana. Gawp to your heart's content but please don't lean on the glass. There is the perfunctory gift shop, with sweets, souvenirs, etc, on sale, although the best buy is probably the parrot feathers which are sold to raise money to help pay the huge heating bills during the winter, when there are fewer visitors.

On a billboard there are photographs of previous visitors in various poses with huge snakes draped around their bodies. One photo is of a little boy looking nervously at the camera as he's holding a Mexican red-knee tarantula3 in the palm of his hand. As the spider is larger than the child's hand, there's no wonder he's looking nervous. These photographs are arranged and taken by appointment as the creatures have to be removed from their cages. The cost of the photo in 2005 was £4.95, good value considering the set-up and well worth it for the amusement factor. It's to be hoped the child is not of a nervous disposition; the fear-factor will surely be remembered for the rest of their lives.

Cleethorpes lies on the east coast of England. The M180 is the easiest way to get to Cleethorpes by car from most of the UK and can be accessed from the M1 or the A1(M) via the M18. Follow the M180 until it becomes the A180 and then just follow the signs to Pleasure Island, which is Cleethorpes's theme park. The Jungle, which is also on Kings Road, is just a few hundred yards north. There is plenty of parking outside, which is free for disability badge holders.

Alternatively, the train service terminates at Cleethorpes and trains depart for Manchester and Doncaster almost hourly during the day. The Jungle is a very long walk from the train station. A short walk from the station is the Pier Gardens, (opposite the pier) where you can get a taxi. During the tourist season (Easter to the end of school summer holidays), an open-topped double-decker bus travels from Alexandra Road (at the top of the Pier Gardens), all the way to Humberston. There is a bus stop outside Cleethorpes Parkway Cinema, which lies opposite The Jungle.

1At time of writing.2Monkey nuts and dry rabbit food.3Brachypelma smithi.