Pleasure Island Family Theme Park, Cleethorpes, NE Lincolnshire, UK Content from the guide to life, the universe and everything 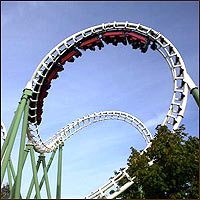 Pleasure Island Family Theme Park is Cleethorpes' main tourist attraction. Unlike some fairgrounds and pleasure parks where the visitor pays per ride, Pleasure Island's entrance fee covers all of the rides for as many times as you want. You won't spend hours queuing either - although the Park does get busy at peak season, it's rare to wait for more than 20 minutes to get on any ride. There are live shows and rides to suit all ages and tastes.

The Park was built in 1993 on the site of the old Cleethorpes Adventure Land & Zoo which was closed in the late 1960s, demolished and turned into a racetrack, which was subsequently closed after numerous complaints from residents. One of the attractions is an original set of Gallopers dating from 1908. Pleasure Island is a trademark name and the Park is owned by Flamingo Land Ltd.

When you have purchased your entrance tickets1, you will be given a map of the Park. You need to study this carefully, as it also contains the times of the live shows, which you won't want to miss. There are more frequent shows on 'Red Show' days than 'Green Show' days. There is a sign at the ticket booths stating which show day it is. The times of the shows are also published outside where they are to take place. Once you are inside, you may leave the Park at any time; the staff at the gate will stamp the back of your hand (only visible under ultraviolet light) so you may re-enter. This is useful if you have prepared your own picnic lunch, as it means you can leave it in your car boot until required.

The rides are described here according to the state of play in 2005, so please note they may change in future seasons. The Park is made up of six sections. In each of the sections are rides of differing restrictions. The staff, who all wear orange polo shirts with a Pleasure Island logo, man the rides at all times. They are friendly and approachable, should you have any problems or questions. Other staff constantly clean the Park.

Some of the following rides are colour-coded. Colour codes are explained in the 'Height Restrictions' section below.

Contains: Customer Services (including First Aid Post and Lost Children Centre); Coach Reception; Gift Shop; Tommy Tinkaboo Musical Extravaganza; Tinkaboo Town (small children only); Flying Chairs (yellow ride); McCormack's Family Bar. McCormack's is a public house and children are welcome. It is situated outside the gate entrance to Pleasure Island so you may go to the pub if you're not going into the Theme Park - so you might not have to leave grandad at home alone after all.

Electrical Monorail Station (green ride); Go-Karts (red ride); Clown Slide (pink ride); Para-Tower4 (green ride); Carousel (no restriction). In the Carousel is a set of Gallopers built by Tidman in 1908. The features and music are all original. It arrived at Pleasure Island in the Park's year of opening, and is housed under cover.

During the high season there are five live shows:

Some of the tricks the parrots performed in 2005 were: balancing on a high-wire while pedaling a bicycle; picking up assorted shapes and putting them into the correct gaps; playing basketball; raising a flag; hanging upside-down from a perch and wing-spreading; riding a scooter, turning round and riding it back again; roller-skating; steering a car, getting out, lifting the bonnet, fixing a problem, getting back in and driving off; picking up coins and placing them in a moneybox; flying through hoops (over the audience's heads); saying hello, saying goodbye and laughing. The show lasts approximately 20 minutes. You can make donations towards the parrots' upkeep in the winter, and even have your photo taken with any parrot of your choice for a small fee, after the show. Posters of the parrots are also on sale.

You should be aware that some rides have notices advising people with neck or back problems not to use them. Expectant mothers should also heed advice where Pleasure Island management recommend that you do not ride. At each ride is a height restriction sign where children can be measured for suitability.

Certain red rides like Pendulus, Terror Rack and Hyper Blaster are strictly minimum height 1.4m. Visitors under 1.4m may ride on all others as a passenger only, and accompanied by an adult.

Cleethorpes lies on the east coast of England. The M180 is the easiest way to get to Cleethorpes by car from most of the UK and can be accessed from the M1 or the A1(M) via the M18. Follow the M180 until it becomes the A180 and then just follow the signs to Pleasure Island, which is on Kings Road, on the border of Humberston and right next door to Humberston Fitties Caravan Park. There is plenty of free parking, and disability badge holders are allowed to park right near the entrance.

Alternatively, the train service terminates at Cleethorpes and, for your journey home, trains depart for Manchester and Doncaster almost hourly during the day. The theme park is a very long walk from the train station. A short walk from the station is the Pier Gardens (located opposite the Pier) where you can acquire the services of a taxi. During the tourist season (Easter to the end of school summer holidays), an open-top double decker bus travels from Alexandra Road (at the top of the Pier Gardens), all the way to Humberston. There are also other local buses which travel to Humberston, and there is a bus stop outside Pleasure Island.

It would be worth your while dropping into the Tourist Information Centre on Alexandra Road, because they can supply you with booklets containing money-off vouchers. In 2008 the booklet contained 'three-for-two' vouchers (one person free admittance with two persons paying full price).

The season had barely started in 2010 when the Park unexpectedly closed and sacked all the staff on 14 April. No information was released by the company who own Pleasure Island. Happily for the area the Park reopened on Saturday 24 April under new management, with all previous staff who hadn't already secured new employment re-engaged.

On 29 October, 2016, the theme park closed for the final time. Pleasure Island's owner Melanie Wood said visitor numbers had continued to fall and running the park was 'a massive struggle'. Rides have been dismantled and sold off, some reportedly shipped to China. McCormack's Family Bar is still open.

1Save the stubs. Use them for half-price admittance in September and October.2Technically not a 'ride'. You have to pedal your swan boat and steer at the same time, around a body of water, whilst trying to avoid real swans (and cygnets).3A roller coaster.4Subject to weather conditions.5He's the one who turns upside down on his perch and spreads his wings out.