Cleethorpes Coast Light Railway, NE Lincolnshire, UK Content from the guide to life, the universe and everything 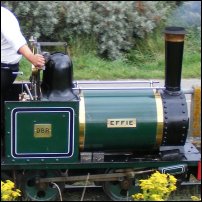 This tourist attraction in Cleethorpes, NE Lincolnshire, is enjoyed by around 150,000 passengers every year, and not just children! Cleethorpes lies on the east coast of England, at the mouth of the River Humber. Cleethorpes Coast Light Railway runs along the coastline parallel to Kings Road. There are just two stations, situated at either end of the newly-improved Boating Lake. The CCLR was created in 1948 by a man called Butterall. The next owner converted the steam engine to electric, running it on a milk float1 battery. Following his tenure, the council of Cleethorpes took over the running of it, and they changed the track width during the refurbishment. However, that idea turned out to be a dud when it was realised the train and carriages weren't so easily converted.

The service fell into disrepair and was vandalised so often that the council sold it at a loss to Chris and Deborah Shaw in 1991. The Shaws replaced the track to the original size and restored the steam engine to its former glory. The project took a few years but it was described as a labour of love. By 1994 it was back up and running full steam ahead. Chris Shaw drives the train himself and the service runs every quarter-hour during the high season (Easter to September).

The CCLR runs a number of trains, both steam and internal combustion (diesel and petrol). The one the Researchers saw is a replica of an old engine called Effie. The original was built in 1875, and scrapped in 1894. Despite her small size, she is a very strong 0-4-0 tank engine, built for her ability, rather than beauty. Details of the original can be found here and details of all the trains can be found at their own website.

The station where you catch the train boasts a tiny drinking establishment2. A hundred-year-old ex-railway signal box was moved from Scunthorpe to Cleethorpes and converted into a pub, which opened to the general public in July 2006. The mini-drinking den, containing a bar with five real ale hand pumps, measures eight feet by eight feet. It can accommodate four people sitting on bar stools and, at a push, four people standing. With the absence of toilet facilities, you'd be wise to be careful how much you imbibe. Some food is available, but it's more 'snack' than 'meal', and pretty basic, but if you like sausage sandwiches and waffles then you won't complain. There are no tables, but there is a Beer Garden outside which can cater for between 20 and 30 people. During the main tourist season it is open Monday to Saturday from 11am until 11pm, and Sundays from noon to 10.30pm. Off-peak visitors should firstly check with a phonecall to 01472 604657 to avoid disappointment.

The Smallest Pub in the World?

Investigations are underway to find out if the 'Signal Box Inn' is tiny enough to qualify for the title The Smallest Pub in the World. The current holder of the Guinness World Record, 'Sam's World's Smallest Bar' in Colorado Springs, Colorado, USA, measures 109 sq ft. The landlord and landlady, Sam and Kathy Guadagnoli, have instructed a lawyer to defend their claim, stating that the Cleethorpes pub does not qualify due to the Beer Garden area.

Our family holidays were spent at Mablethorpe, exotic and far off to the south. Cleethorpes was the day-out venue, not least because Mum was uneasy about the tiderace in the estuary. The railway belongs to the hazy recollections of a small child, and it was wonderful and mysterious. Uncle Pete told me that it brought children to Cleethorpes from all over the world. It was sleek and powerful in the eyes of a little boy who only ever saw trains in the distance. It was up close and you could lose yourself in its gleaming paint and its scent. When I visited again, years later, I was surprised and disappointed that the little train seemed so insignificant. Then I saw that the younger kids were skipping with excitement, their eyes wide. It made me glad that once I'd seen what they saw still.
– An h2g2 Researcher

How to get There

The M180 is the easiest way to get to Cleethorpes by car from most of the UK and can be accessed from the M1 or the A1(M) via the M18. Follow the M180 until it becomes the A180 and then just follow the signs to Pleasure Island, which is Cleethorpes' Theme Park. The Jungle, which is also on Kings Road, is just a few hundred yards north. There is plenty of parking outside, which is free for disability badge holders. Park here and enjoy this attraction before taking the few strides to the Cleethorpes Coast Light Railway.

Alternatively, the train service terminates at Cleethorpes and trains depart for Manchester and Doncaster almost hourly during the day. The Cleethorpes Coast Light Railway is a very long walk from the train station. A shorter walk from the station is the Pier Gardens, (opposite the pier), where you can get a taxi. During the tourist season (Easter to the end of school summer holidays), an open-topped double-decker bus travels from Alexandra Road (at the top of the Pier Gardens), all the way to Humberston (turning round at Pleasure Island Theme Park). There is a bus stop outside Cleethorpes Parkway Cinema, which lies opposite the car park.

1A milk float is an electric vehicle designed to be quiet so the milkman didn't disturb his customers on the early morning doorstep delivery round.2Researcher's own photo, the link may not work due to some security filters.