The Boating Lake, Cleethorpes, NE Lincolnshire, UK Content from the guide to life, the universe and everything 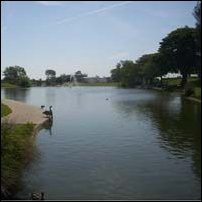 If you're ever passing through north-east Lincolnshire and have an hour or two to spare, you could do a lot worse than follow the signs for Cleethorpes and enjoy a wander around the refurbished Boating Lake1.

This is the place to go if you want to escape the daily grind and reconnect with your inner self. Do yourself a favour and turn off your mobile phone. Here you can drink in the wondrous glory of wildlife in a natural setting, or just revel in the spectacular views. Be aware that it's a sun trap. Take along some skin-protection cream of an appropriate factor. Also, don't forget your sunglasses and hat.

While the award-winning clean beach is a magnet for tourists, and the Pleasure Island Theme Park the main attraction for teenagers and families with children, the Boating Lake offers more in the way of communing with nature. Oh, and, discounting the car park fee (80p for an hour, £1.50 for two hours in June 2008), it's free and open all year round. Allow at least an hour for a slow walk around the lake.

Cleethorpes Boating Lake has a long history. Older trippers may remember visiting Cleethorpes when there was an outdoor swimming pool where the leisure centre now stands. And in pre-Pleasure Island days there was a zoo. Anyone revisiting the Boating Lake now would get a pleasant surprise; the area underwent a total revamp in 2006 - 2007. It's now twice its original size, with some new features:

Walking from the car park down the grassy slope at the north end, the first thing to notice is the new lifebelt in a red stand. Your attention may be attracted by the whistle of a train, but the unmistakable smell of the billowing smoke will already be assailing your nostrils. People wait until the tiny one-seater engine of the Cleethorpes Light Coast Railway - pulling cramped, seated passengers in carriages - has passed, then cross the railway line.

Now you must make your first decision, possibly based on your circumstances. The outermost path is the more level one, but only spasmodically reaches the edges of the Boating Lake. It undulates but it has no steps, so is the choice of wheelchair users, the mobility-impaired and people pushing prams or buggies etc. From this path, you'll get views over the River Humber across to Spurn Point, and a much higher vantage point over the Boating Lake. However, the closest you'll get to wildlife is minding you don't trip over the occasional sleeping goose.

The inner path takes you along the edge of the water. In some places expect to get your clothes splashed by landing, taking off or bathing fowl, and expect to be stalked by a flotilla of ducks seeking scraps of bread they've come to expect from all visitors. Along this path, you'll climb steps and pass through copses with overhanging trees; it feels like you're experiencing an eclipse of the Sun on a beautiful day. Quiet, shady and cool, it's like momentarily stepping into another world. This path is marked with painted-yellow webbed footprints2, which means the feathered residents have right-of-way. Be aware that it's slippery, so hold hands and avoid the slimy green stuff underfoot at all costs.

Denizens of the lake include Greylag and Canada geese, coots, swans, and several duck species. In springtime you may be lucky enough to witness a new batch of ducklings or a mother swan with her brood of cygnets. All around the grounds of the lake are sparrows and pigeons which feast on the scraps that the ducks have left alone too long.

Some ducks and geese venture as far as the grassy embankments, unaware they've left their allotted area. Geese are quite friendly if they don't view you as a threat, but beware: if they are guarding young, they will defend them. The geese don't like dogs at all; they hiss and adopt a stance that suggests if you get any closer they will attack. For this reason, dogs aren't allowed off their lead, although they are welcomed to the area; the Boating Lake is a popular haunt for local dog-walkers.

The Bridge and the Sandpit

The new humpback bridge is situated approximately halfway around the lake. Crossing it will bring you to above the refurbished sandpit, but you'd have to descend several steep steps to reach that3. This would entail carrying buggy and child, if you've brought along such things. The sandpit is a wonderful place for children to let off steam and use up some of their boundless energy. On the new mock galleon, the little darlings can climb and shriek and pretend to be pirates to their hearts' content, while their parents and carers sit around the outer edge trying to close their ears and converse by lip-reading.

If this isn't for you, retrace your steps over the bridge. Stop halfway and look back the way you came; the view is amazing. Turn through 180° and see how far there is to go; you can't see the end of the lake as it winds around the old island. To your right, on the same side as the sandpit, is the Discovery Centre, with stark white walls and a modern design displaying its newness. You can inspect this on your way back round. By the time you alight from the bridge you'll be well out of range of the aural assault, and can get back to identifying birdsong as you wander along the leaf-canopied paths.

Some new islands have been created and planted up with saplings, flowers and older shrubs. There's a waterfall on one, at the top of which is the 'Boy with the Leaking Boot' statue that has long been the symbol of Cleethorpes. It used to be a water feature among the floral arrangements on Kings Road, but it was vandalised, repaired, then attacked again so many times the council has finally moved it to a place where mindless morons can't reach it. Unfortunately, that means the people who appreciated it have to live without it, although a portrait of the statue appears on the 2008 'Cleethorpes in Bloom' welcome sign on Kings Road.

At the extreme end of the Boating Lake you'll reach the rear of The Jungle - a popular tourist attraction. If you have time, this place is well worth a visit. There's a truly delightful family of meerkats living here; watching their antics is worth the entrance fee alone. The Jungle is also a rescue centre, providing homes for exotic animals which have been donated or abandoned, including snakes, parrots4 and huge bird-eating spiders like tarantulas. Close contact with some of the animals, like goats and guinea pigs, is allowed, but snakes and spiders are displayed safely behind glass.

You have two choices, really. You can either go back the way you came, which is much more scenic, or keep following the path, passing the rear of The Jungle and a restaurant5 displaying the sign 'All you can eat buffet: £3.50' in chalk (although this will have probably have changed by the time of your visit).

A little further on is the bandstand. Well, its local nickname is the 'one-man bandstand', because it wouldn't hold a string quartet, never mind a band. Further on you'll pass a new bench and the remains of a once-proud castle which didn't survive the refurbishment. Part of the base and a small wall are all that's left, giving a feeling of disappointment for those with strong childhood memories of happy days spent playing there.

The old boathouse, where you can hire a boat, is still there. It must have been the last thing on the update list, as all it's had is a coat of paint. On the day of field research, a few couples and small family groups were out on the lake, struggling with oars and rowlocks, shrieking with laughter as they tried to avoid colliding with other boaters and bemused birds. Boats are available to rent between March and October, the main tourist season. If you intend going boating, it would be wise to add another hour to your car parking ticket when you arrive.

However long you spend at the Boating Lake, you'll feel rejuvenated, and hopefully feel the healing power of reconnecting slowly with nature, before you head back to the fast-paced, modern world.

Cleethorpes lies on the east coast of England. The easiest way to get there by car from most of the UK is the M180, which can be accessed from the M1 or A1(M) via the M18. Take the M180 until it becomes the A180, then follow the signs to Pleasure Island (at the border of Humberston and Cleethorpes). The Boating Lake, also on Kings Road, is just up the road heading north. Keep Pleasure Island to your right and then watch for the large sign 'Cleethorpes in Bloom' - the turn-off for the car park entrance is just after it. There's plenty of parking, which is free for disability badge holders. You can purchase up to a four-hourly parking ticket.

Alternatively, the train service terminates at Cleethorpes, and trains depart for Manchester and Doncaster almost hourly during the day. The Boating Lake is a long way from the railway station, along the promenade heading south. A short walk from the station is Pier Gardens (opposite the pier), where you can hire a taxi. Ask for the leisure centre and walk the few hundred yards from there.

During the tourist season (from Easter to the end of the school summer holidays), an open-topped double-decker bus travels from Alexandra Road (at the top of Pier Gardens) all the way to Humberston, and back again. This will take you along the 'scenic route'. If you manage to acquire a seat up top, you'll have grand views over the river to Spurn Point. See if you can spot the wind farm off the Yorkshire coast, the now-defunct Spurn lighthouse, and the old fort. Watch the ships on their way to offload cargo at Immingham docks, and passing ferries taking people to European destinations across the North Sea. Alight at the bus stop outside the Parkway Cinema, which is diagonally opposite the entrance to the Boating Lake.

On the way back to the railway station, get off the bus at High Cliff and walk along Pier Gardens. There's a new memorial to the brave RAF men who fought and died during wartime. Marvel at the refurbished Ross Castle with its specially designed crab flag, and walk up the slope inside the castle, if you can. It's a steep climb, but the view across the Humber and up and down the promenade makes it worthwhile.

1Photos taken by the author.2Or, yellow webbed-foot prints.3The sandpit is more easily accessed from Kings Road, avoiding the Boating Lake altogether.4During the Bird flu scare it took in 60 (healthy) exotic birds, some of which were literally dumped on its doorstep, cages and all.5This was called the Bird's Nest Café when it was built. Since then it's had a few name-changes, but is still known locally as 'the Bird's Nest'.