Holding Hands Content from the guide to life, the universe and everything 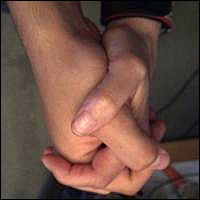 Holding hands is the act of two people who are usually involved in some sort of personal relationship, usually close friends or people who are dating or married. The act will involve them placing one or both of their hands in, on, or around the hands of each other. Generally, this is done as a show of affection, but can also be done to warm hands, take a pulse, or to play a rousing game of 'thumb wrestling'. This entry deals with hand holding as an act of affection.

The holding of hands is usually done when couples are walking or sitting next to each other during romantic moments, when politicians are trying to solicit votes, or as a more socially acceptable leash for small children. In many religions, it is used to signify unity and friendliness in the community, and during most marriage ceremonies, the groom will hold the bride's hand when sliding on the wedding band onto one of her fingers (and vice versa). In any event, the holding of hands is an old human custom that shows little sign of going away, much like the sticky candy residue left by the hand of the aforementioned child.

This technique involves 'weaving' the fingers of the hands together. This is usually done by placing one hand from each partner together with palms touching, with the fingers pointing in the same direction. Then, the fingers are curled down around the hand of the other, alternating between a finger of one partner and the finger of another.

However, if one partner's fingers are much larger than the other's, it can be very uncomfortable for the person with the smaller fingers if their large-fingered partner slides their fingers all the way down the between-finger gap. (If your partner writhes in pain, or you hear bones and tendons snapping, odds are they aren't enjoying holding hands as much as you would hope.) Instead, relaxing the fingers, and sliding the larger hand 'up' a bit (so that the base of the palm is closer to the base of the fingers) helps keep the large fingers from splitting apart the other person's hand.

An alternate method is to place the palm of one hand against the back of the partner's hand, then weave the fingers together as mentioned above.

This technique is similar to the woven technique above, however, instead of lining up the fingers and weaving them together, the hands are turned about 90° away from alignment. The fingers are then wrapped around the hand of the other, similar to how one would hold a glass of water1. This technique can also be done with the palm placed upon the back of the partner's hand.

This wrapped finger technique is a method of holding hands to avoid the painful problem of large hands described above, as well as the way hands are held during arm-wrestling. It is also useful when the passenger in a car is holding hands with the driver, and the driver needs to retain access to a gear stick, though caution in this case is recommended.

Two-handed hand holding can either be done mutually, with both hands of each partner involved, or with one person's hands wrapped around a single hand of the other. In the four-handed case, either the right hand of one person grips the other's left (and vice versa), or one person wraps hands around both hands of the other. In any event, two-handed holding is usually done when the two people are standing or sitting opposite each other, and the hands usually assume a position similar to that of some types of prayer. To do this, the hands are generally placed palms together, fingers aligned, but not wrapped or woven.

While holding hands can be very enjoyable, moving one's fingers a bit can heighten the experience, possibly up to the point of reaching foreplay. One way of doing this is to rub your partner's hand with your finger tips (usually best suited for wrapped-finger hand holding), or by sliding the tip/side of your thumb across their hand (works well with both methods). This gentle rubbing can be done either constantly, or as an occasional signal to your partner to let them know that you haven't forgotten how keenly you're enjoying the hand-holding experience. It's also a good way to help the circulation of blood during marathon hand-holding sessions.

Somewhat similar to the finger rubbing described above, hand squeezing is another way of making your partner aware that you are indeed holding their hand, and that, more likely than not, you're enjoying it. It's important that when doing a hand squeeze, it's a gentle hand squeeze. You are not trying to crush your partner's hand (that is, unless you're in a competitive setting, such as arm/thumb wrestling). Excessive squeezing pressure can be especially painful if the fingers are woven together. The squeeze should be gentle and slow, and be done every once in a while to spice things up, though it can also be used as a form of silent communication if done hidden from the view of others.

While not a terribly enticing topic, it's a common occurrence, especially during extended hand-holding sessions, that one or both partners' hands will begin to sweat. In this situation, either use a towel to dry your hands off and resume the holding, or else use a single-hand method and switch between using one hand then the other.

So, how do you know when to hold hands with someone? The most socially acceptable signal to give and receive is to simply 'offer' your hand by holding it out, usually with the four fingers pointed more or less at the other person, and the palm facing up.

For the less discreet, it's possible to simply take the other person's hand into your own, and hope for the best. However, this may scare off the holdee, causing them to withdraw their hand.

For the timid, simply making your hand accessible can be a good way to show interest in a hand-holding session. This can be done when walking next to the person of interest, and 'accidentally' bumping their hand when your arms swing by each other. When sitting, simply placing your hand near or against their hand sends the message 'I'm interested if you are'. In either case, with luck, the other person will take your hand into theirs.

1Or preferably, a nice tall pint of Guinness.