Our Love/Hate Relationship With Pigeons Content from the guide to life, the universe and everything 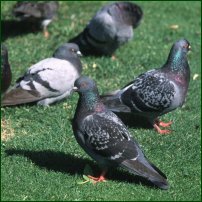 George: Don't we have a deal with the pigeons?
Jerry: Of course we have a deal. They get out of the way of our cars and we look the other way on statue defecation.
- Seinfeld episode 162, 'The Merv Griffin Show'

For centuries, pigeons have been a huge asset to man. As far back as the ancient Egyptians, homing pigeons1, those who are trained to fly to a certain location, were used to carry messages and were later referred to as carrier pigeons. Pigeons have an acute sense of direction, guided in part by the Sun and magnetic fields, and a desire to return home at all costs. Over time, other people discovered this use for pigeons and they were used throughout both World Wars, when soldiers' lives often depended on these feathery creatures to transport important communications. During war, it was a court-martial offence to kill a carrier2. It is estimated that thousands of lives were saved thanks to pigeons. They have even won military honours for their services.

Charles Darwin extensively studied pigeons in his theory of evolution. They were thought to be goddesses of fertility. A homing pigeon carried a message telling the results of the ancient Olympic games in Greece. In the Old Testament, a dove brought back an olive branch to Noah, indicating dry land at last. Both doves and pigeons are members of the Columbiformes and are closely related.

Pigeon fanciers have devoted their entire lives to raising, racing and showing their fancy breeds of pigeons. To some, the care of their pigeons is the most important thing in the world. Mike Tyson, the former heavyweight boxing champion, has raised pigeons ever since his boyhood in Brooklyn, New York City. He even put his pigeons before his boxing career, and when he retired he said he just wanted to be with his pigeons.

It's not pretty at all! They're... They're rats with wings! It's probably one of those killer pigeons. See, it's got a swastika under its wing.
- Woody Allen, Stardust Memories (1980)

Pigeons are also one of the most hated animals on the planet. This is quite unfair.

Pigeons, particularly feral city pigeons, are seen as vermin, carrying vile diseases and evil hygiene. Not to mention being intolerable pests, due to a certain practice of theirs involving statues.

Okay, maybe people have a good point about the statue thing. And it is possible for pigeons to carry diseases, but this is less common than people think. We still persist in using our wealth of weapons against pigeons: nets, spikes, poisons, capturing and shooting them at country firing ranges where they are used as live targets for marksmen. Even some pigeon fanciers dislike common city pigeons, because they supposedly give their fancier, superior breeds a bad reputation.

We'll murder them all amid laughter and merriment
Except for the few we take home to experiment
My pulse will be quickenin'
With each drop of strychnine...
- Tom Lehrer, 'Poisoning Pigeons in the Park'

In cities, pigeons do make messes, but a largely ignored fact is that in return they also clean up after us. They eat bits of food we throw away on the street such as pizza crusts, stale doughnuts and old bagels.

A popular pastime for some pigeon-lovers is sitting on a bench and feeding the gathering birds breadcrumbs, popcorn or birdseed. In many cities, this has been made illegal because it is thought that over-feeding leads to over-breeding, which increases the population of these so-called vermin. In London, Trafalgar Square is heavily frequented by pigeons who were for years being fed there by people. London mayor Ken Livingstone put a stop to this.

It is a sad but well-known fact that humans are a violent species. This is evident in the story of the passenger pigeon.

In the United States, passenger pigeons were unbelievably abundant up until the mid-19th Century. They made up 40 per cent of the bird population. Flocks of these pigeons could be about 300 miles long and three miles across. Whole trees sometimes fell over from the weight of all the pigeons roosting in them. Apparently, they were also tasty to eat, and easy to acquire. These birds were hunted to extinction. The population started to decline and the last flock was destroyed in 1896, with the last individual wild bird shot in 1900. The last captive passenger pigeon ever died in a zoo in Cincinnati, Ohio in 1914. There was a reward offered for anyone who could find a mate for it, but no one did, obviously. This last bird, named Martha, was preserved, stuffed and put on display at the Smithsonian Institute, though it has since been removed.

Another bird we hunted to extinction was the dodo, also related to the pigeon. The last one died in 1681, and we don't know much about it. A stuffed dodo lasted beyond this period, but it was thrown away when it started to smell musty.

1Also known as 'homers'.2This inspired an episode of Blackadder.