The Canada Goose in the UK Content from the guide to life, the universe and everything 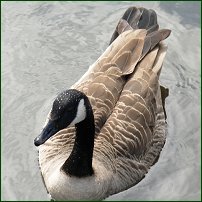 If you're out in a public place and see a large, stocky bird, it is likely to be either a mute swan or a Canada goose. How do you tell the difference? The mute swan is a graceful, large white water bird whose presence is enjoyed by everyone, while the Canada goose is a black-necked, brown-backed bird that was introduced into the UK, has taken over many waterways and is only appreciated by a limited few.

Distinguished by its black neck and brown back, it is common throughout the UK. It is aggressive to other waterfowl, and often to children who enjoy feeding bread and other foodstuffs to birds. The Canada goose is seen as both a pest and as a pleasure by the general public - we'll leave it up to you to decide on your choice after reading this Entry!

Like all living organisms, the Canada goose is classified according to its physical characteristics. This is known as its taxonomy. All birds share the same basic features:

The Canada Goose is further classified as:

The Canada goose, Branta canadensis, is a member of the Branta or black goose genus. It is one of three members of that genus found in the UK, the other two being the barnacle goose - Branta leucopsis, and the brent or brant goose - Branta bernicla. There is a fourth goose which is an occasional migrant, the red-breasted goose - Branta ruficollos. It is named after its distinctive black neck.

The Canada Goose in the UK

Here is a list of the Canada goose subspecies:

The UK bird is essentially different from the American bird. It has changed its behaviour, character, and build. Since its introduction it has largely become non-migratory, unlike the Anser genus in general. It is often to be found flitting between one local park and another. To give an example, the St James's Park, London, residents roost at Regent's Park lake each evening, and then spend the daylight hours back at St James's Park.

British Canada geese are generally heavier than the nominative race, and appear less prone to flight. This may be due to wing-clipping causing a reduction in the desire to fly. This does need some scientific study though, and is purely an educated guess on the part of birders in general. Certainly it is rare to find a Canada goose migrating to, or even more importantly from, Canada!

They are also far less aggressive as they have become more domesticated and familiar with mankind, so the aggressive streak found in native birds is reduced, but not gone, in native UK birds.

This is the largest of the Branta goose family, measuring 90 - 100cm full length, with a wingspan of 160 - 175cm. The plumage of both male and female birds is identical, although the male is larger and more bulky. The bird has a long, black neck and head, with a white chin patch, black, large bill and webbed feet. The back and wings are grey-brown, with white-edged primary feathers. The breast is buff, darkening towards the belly with a white rump.

The nest is usually on an island, consisting of a hollow with a low covering of grass, leaves and/or reeds, often topped with a light cover of down. If the nest is on land, it is rarely more than five metres away from water. This may be more if in an area where there is no scrub or woodland, for example in highland areas. There is only one clutch of five to six white eggs, laid around mid-March. Incubation takes around 28 - 30 days, with the female generally taking on the role of incubation. When hatched the birds are active and downy, taking 40 - 48 days to fledge. The fidelity of the parent birds is uncertain, but it is thought they mate for life.

Outside of the breeding season, flocks are made up of families, non-breeding adults and juveniles. At other times the flocks are loose and of indeterminate size and composition. It is recognised by its call which is a deep resonant wagh-onk honk, used especially in flight which is in a typical goose V-formation, numbering 5 - 15 birds typically. Flocks can be aggressive toward each other when feeding, with a characteristic head-bobbing action, consisting of raising and lowering the head by the bending and straightening of the neck. The Canada goose is vegetarian, feeding mainly on fruits, grain, grass, leaves, roots, stems and tubers. It is regularly seen where people are feeding other wildfowl (see Pest Control, below).

The bird is widespread throughout England, and also throughout Europe, with occasional rare birds appearing from the US and Canada. The bird is perceived to perform moult migrations, sometimes over large distances. The Canada goose usually only travels over relative short distances, of around 500 metres to five miles, between roosting and feeding areas at other times. The UK population is described varyingly at 55,000 - 60,000. The British Trust for Ornithology puts the population as 83,000 summer resident and 61,000 winter resident birds. This is from a perceived population of 10,000+ in the late 1960s.

The Canada goose is a native of the American Atlantic seaboard, and records purport it to have been introduced to England by King Charles II (or more likely a collector), around 1660, having acquired a number of birds as additions to his wildfowl collection in St James's Park, London. Due to this Royal connection it soon became popular in country gardens with lakes and ponds across England, especially due to its striking plumage and call. It became a wildfowl staple with landed gentry and country estates. Surprisingly, despite its popularity, the first recorded entry for breeding does not occur until 1890. However, this may be the first wild breeding record, rather than captive. The records do not give a distinction. The Canada goose has taken 200 years to spread nationally, via escapees, released birds and possibly human intervention (see pest control below), in the wild and become acknowledged on the British list as a native bird1.

It is reported that their distribution may have been assisted by man's accidental intervention in the 1950s. The bird had been deemed a rural pest and so roundup was begun while the birds were in moult, to relocate them to less contentious areas. The sites generally chosen were Council-run lakes, parks, reservoirs, gravel pits and ornamental gardens. It was not widely understood at that time that Canada geese are naturally sedentary. When left alone their population stayed level due to the constraints of food and breeding. When they were moved these constraints disappeared and the birds bred prodigiously, creating a rapid population explosion. The birds have since adapted to coexist with man to the point where they are becoming serious pests. They appear a naturally aggressive bird and they will compete with other wildfowl for food, especially if provided by man, typically children with bread or equivalent. It has been reported that people have been pecked or aggressively bitten, with a couple of instances of people being knocked off their feet.

The Canada goose has a prodigious feeding rate, (three birds to one sheep equivalent) with a rapid digestive system to match. This has two negative attributes. The first is that it crops plants to surface level, causing massive denudation. Also, its guano, which it deposits at five-minute intervals, in the form of loose, grey-green, torpedo-shaped faeces, is exceptionally harmful. The birds foul lawns, parks and lakesides due to their sedentary nature and the faeces may cause the deoxygenation of lakes and ponds, creating algal blooms and toxic pollution. There is also a concern of the spread of bacteria and viruses in children. Another concern is as a hazard to aviation. To this end, population control is being introduced. This involves, among other methods, controlled shooting of moulting birds in London parks, destroying eggs or coating them with liquid paraffin and even using egg substitutes.

Maybe the days of this goose are cooked!

1Having a sustainable breeding population. British Trust of Ornithology.