Collared Dove Content from the guide to life, the universe and everything 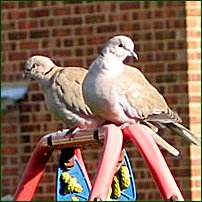 The Collared Dove, Streptopelia decaocto, also known as the collared turtle dove, is in the same genus as the turtle dove, rufous turtle dove and laughing dove. The turtle dove is the only other bird of this genus found in Britain. The collared dove is the more common of the two in the UK, and is instantly recognisable by its plumage, colour and tendency to be seen in pairs. Its call is very distinctive, and the bird is often loved or loathed for this alone. It is a very elegant bird which has adapted to living in close proximity to man and is perfectly at home in an urban environment, as well as in an agricultural one.

Like all living organisms, the collared dove is classified according to its physical characteristics. This is known as its taxonomy. All birds share the same basic features:

The collared dove is further classified as:

The collared dove (also known as the Eurasian collared dove) measures 31 - 33cm in length, with a 47 - 55cm wingspan, weighing around 170 - 240g. The upper parts are pale buff, with a pale pink to buff breast and belly. There is a distinctive black collar at the base of the head, lightly edged with white. The primary flight feathers are black, while the square-ended tail is also black, edged with white. Its body shape can be confused with a raptor's outline, leading to the bird being mobbed by other birds.

Its preferred habitat is usually gardens, farmyards, and orchards and it particularly frequents areas that offer cover and openness in the same area, with close proximity to man. It is vegetarian, feeding mainly on cereals and seeds; the diet also includes ground-based fruit and vegetation. However, it has been noticed that the birds are now taking berries from bushes and trees, and frequenting hanging bird-feeders and tables.

The nest is an untidy affair, consisting of a flimsy platform of twigs, stems and small branches in trees and bushes, on ledges, guttering and occasionally agricultural buildings. The female lays a clutch of one or two oval, white eggs, with incubation taking 14 - 18 days. The young fledge in 15 - 19 days, often with a second and third clutch. Ordinarily the breeding season is through the spring, but appears to clutch all year round. The birds appear monogamous, often being seen in pairs, and are territorial. Bonding is frequent with neck caresses and bill tapping being noticeable. The call is a recognisable, strident 'ka-KOOK-Ka', the 'kook' being three times longer than the 'ka', the last of which is often cut short on the last call. The phrase can be repeated up to 15 times.

Although this is a non-native bird, it is not an introduced species. However its history is intriguing. Originally it was only found around the western Indian subcontinent. Then, in the late 1800s, there was a migration out as far as the Balkans, where the expansion stopped. There was then an explosive migration west from 1910 - 1950, covering 2.5million square km. From 1920 - 1940 the bird's range expanded by a 1,000km radius.

The first breeding record in Britain was in 1955, but the major expansion occurred in the 1970s where, before then, the bird was a rarity, and a welcome 'tick' for a birder birdwatching over that period. The population was around 25,000 then, but is now in excess of 200,000 breeding pairs, and the dove is Britain's seventh most successful breeding bird. Its relative, the turtle dove Streptopelia turtur, is in rapid decline, having decreased by at least 77%1 in 30 years. Indiscriminate shooting in certain areas of Europe, such as Malta and Crete along with other Mediterranean areas, are believed to be a major contributing factor. This is of particular concern as it is seen as an agricultural pest in those areas. Shooting is now illegal under the European Union Birds Directive 79/409 regarding the conservation of wild birds which applies to all Member States of the European Union (25 countries as of 2006) bringing the 1979 Bern Convention on the Conservation of European Wildlife and Natural Habitats into effect2. Another reason may be the ongoing drought in the Sahel desert region of Africa, which started in the 1980s and is still happening today.

The collared dove is known as die Fernsehtaube or 'the television dove' in Germany, due to its habit of using television aerials as its calling post.

Its scientific name 'decaocto' means '18' in Greek and comes from the mythical story of a maid who, after allegedly being paid the miserly sum of 18 pieces of silver a year, prayed to the Greek Gods to let them know how mean her mistress was. To spread word of her misery, Zeus listened and created the collared dove. Its call, which sounds a little like the Greek 18, 'decaocto', is heard to this day.

1According to the British Trust for Ornithology, (or BTO as it is often known) the official bird-recording organisation in Great Britain.2This convention covers all European countries with the exception of Russia, Belarus, some former Yugoslavian countries and those in the Caucasus, although pressure is being bought to bear to make them sign up to the directive as well.