Mandarin Duck Content from the guide to life, the universe and everything 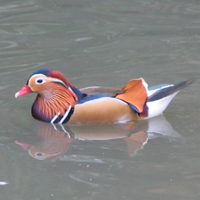 The mandarin duck, Aix galericulata, belongs to the Anatidae, a family of small to medium-sized wildfowl which are tree-perching, hole-nesting birds.

The male is a very exotic waterbird, possibly the most colourful in Britain. It has very distinctive orange 'whiskers' on its head, and orange 'sails' on its wings. As with most ducks, the female is a pale nondescript bird. The mandarin duck is most likely to be found swimming, but can occasionally be seen in flight. It was introduced into the UK to brighten up the lakes of stately homes and parks. The feathers were also used in the millinery business, due to their vivid plumage.

Like all living organisms, the mandarin duck is classified according to its physical characteristics. This is known as its taxonomy. All birds share the same basic features:

The Mandarin duck is further classified as:

This is a very attractive and distinctive bird, often perceived as Britain's most colourful bird. It measures 41 - 49cm with a wingspan of 68 - 74cm. The male is very exotic-looking, with a red bill and a green and orange-chestnut head with a broad white band over the eye and a slight crest. Below the eye is a conspicuous set of orange-chestnut whiskers which reach the breast and back. The wings have a matching set of sails. The breast is a deep maroon, with two black and white belly stripes. The back is a deep brown, and the wings have a green-blue speculum1. The female is a more drab brown, with a distinctive white eye spectacle, extending to the back of the head as a white stripe. The breast and sides are grey-brown with white spots and a white rump. The back is grey/olive brown, also with the distinct speculum on the wings.

The nest is usually situated in hollows in trees up to 15m off the ground, but normally no more than 10m. The nest can also be found in tree stumps or fallen branches. It is bare with a clutch of 9 - 12 white eggs. They are laid between mid-April and mid-May, with incubation taking 28 - 30 days. The young fledge in 40 - 45 days, and leave the nest by leaping from the hole to the ground, where they head for the nearest water.

The birds are omnivorous, feeding mainly on seeds and nuts on both land and water, but will also dabble for vegetation and will take invertebrates.

The birds are largely silent, the male occasionally issuing a sharp rising whistle, while the female has a call reminiscent of the coot, with a 'kett' or 'ke'.

The birds are naturally found in the Far East, notably Japan, China and Eastern Russia. Its native habitat is fresh water, with dense woodland and shrub close by, and surrounded by reed-like shelter.

The bird was first recorded in England in 1775, although colonisation does not appear to be regularly recorded until the 1920s. The first recorded breeding success was at London Zoo in Regent's Park in 1834, but the modern population appears to stem from Alfred Ezra, who was keen to introduce exotics into London's Parks. He was given a number of birds in the 1920s, and eventually released a large number of the offspring in London. Many perished but, combined with Lord Grey's releases, a feral population was established.

Its breeding rate has been efficient due to plenty of nesting areas, with a tendency to take over nesting boxes provided for birds such as owls in woods where there is an abundant food source in acorns, chestnuts and beech mast. The population is also replenished by escapees from ornamental ponds and country estates.

The UK population is growing and the breeding population is estimated to be in excess of 3,500. This is about the same as the native population in Japan, where it is in decline. The main cause appears to be primarily due to deforestation. There are two main populations in the UK, one in Virginia Water, Surrey, and the other on the Surrey/Berkshire border.

The wood or Carolina duck Aix sponsa is a relative of the mandarin duck, and has certain similarities, although a native American bird. The male has a similar bill, but then the differences are marked.

The male has a dark green head, with a white throat and cheek markings and a white eye brow. There is a long green crest, rather than mane containing white streaks. The neck and breast is burgundy, with a buff belly and green wings. The female is easily confused with the female Mandarin, but has green in the crown, and a broader white spectacle, with a less distinct speculum. It was introduced into Britain in the 1870s, but doesn't seem able to become established, except from a small tenacious toehold in south-east England. The suspected reason is a longer fledging period to the mandarin, but there is no definitive proof. The British population total is unknown.

1The speculum is a vivid iridescent patch on the bend of the wings, conspicuous in flight, and usually visible to the keen eye when the wings are furled. Many wildfowl have them in varying colours, usually green or blue.