The Regent's Park, London, UK Content from the guide to life, the universe and everything 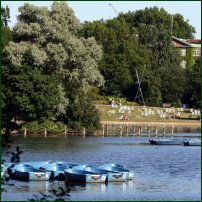 The Regent's Park, usually referred to simply as 'Regent's Park', is one of urban London's greenspace areas. The modern park covers an impressive 410 acres, 166 hectares (equivalent to 205 football pitches1), and incorporates London Zoo, an open-air theatre and 100 acres of sporting facilities2. Visitors from other parts of Britain, who think of London as a concrete jungle, would be well-advised to take a good long walk through Regent's Park just in case it changed their perceptions.

Along with most of London's other Royal Parks, Marylebone Park was adopted by King Henry VIII as a hunting ground. Bordered only by a large ditch, it remained a Royal Chase until just after the English Civil War, when the victorious Roundheads leased it to the Earl of Portland. It remained in the hands of the Earls and Dukes for over 150 years.

It was only when the lease expired in 1811 that the Park began to be developed. The Prince Regent, later to become King George IV, commissioned John Nash to redesign the park, and it was renamed in the Prince's honour. Early plans for extensive villas and a palace for the Prince and his friends were virtually scrapped, with only eight of the 56 residences originally envisaged being built.

Two roads encircle the park, appropriately called the Inner and Outer Circles. These are open to vehicles during normal park opening hours (see 'Visiting', below); coach drivers need to apply for a permit. The two are joined by a link road, Chester Road, where there is dedicated disabled parking.

In 1826, the Zoological Society of London was formed with the intention of studying animals in as natural an environment as possible, and two years later London Zoological Gardens were opened to its members thanks to the Marquess of Lansdowne, who convinced George IV that it would be nice if the King would charge a negligible rent. Financial pressures soon caused problems for the Society, however, and in 1847 it was opened to the general public, who were delighted with their new 'zoo'.

It was a trailblazing zoo from the start; not only the first scientific zoo, but also the first to have each of a reptile house, insect house, aquarium and children's zoo. The zoo also contains four Grade II listed builings and one Grade I, making it significant architecturally, too.

The modern zoo contains over 650 species of animals, and is one of the most visited zoos in the world. It can be found in the north of Regent's Park, near Camden Town tube station.

Since being established in 1932, the Open Air Theatre has proved an extremely popular summer attraction. It is estimated that 120,000 people see a performance each year, and since 1996 its shows have received over 20 nominations for theatre's 'Olivier' awards. Operating under the name the New Shakespeare Company, the theatre is run as a not-for-profit charity.

It is most famous, obviously, for its Shakespeare productions, but other performances include musicals, children's plays, comedy nights and occasional concerts from the likes of KT Tunstall and Ronan Keating. The theatre, which is open from May to September, is found towards the southern side of the park, inside the Inner Circle. The nearest tube station is Baker Street.

Just to the west of the Inner Circle, there is a lake with boating facilities as well as heronry and wildfowl sections. The nearby bandstand was the target of an IRA bomb in 1982; seven members of the Royal Green Jackets Band were killed while playing songs from Oliver.

Sport and The Hub

The Hub is, as you would imagine, the centre of sport at Regent's Park. It comprises eating and conference facilities in addition to changing rooms and offers fitness regimes such as yoga, circuit training and pilates.

Jogging is also popular in the park; a popular meeting point is the fountain, just to the south-east of the zoo.

The sports pitches and facilities are found in the centre and west of the Park. Baker Street and Camden Town are the nearest tube stations to The Hub.

Regent's Park in the Movies

The Park has featured in many films, including the reptile scene in Harry Potter and the Philosopher's Stone and scenes in Bridget Jones: The Edge of Reason and About A Boy. The classic scenes in Withnail and I, where Withnail delivers lines from Shakespeare's Hamlet, and the rowing scene in Brief Encounter, which ends with Alec in the water, were both filmed in the Park.

Opening at 5am and closing at dusk every day, Regent's Park is a place to spend an hour or a whole day - there's certainly enough to do here to get away from it all. There are a few toilets scattered around and a few cafes, as well as a good eatery, The Honest Sausage.

Just north of the park is Primrose Hill, just the other side of Regent's Park Canal, possibly the best place to get a view of London's skyline.

Regent's Park Tube Station on the Bakerloo Line is closed for refurbishment until July 2007, but there are many nearby stations - Great Portland Street, Baker Street, St John's Wood and Camden Town are all within walking distance. There are also many buses that run near the park; for more information, see Transport For London's London Buses page.

1The football pitch is a well-known unit of measurement in the UK, covering about two acres. See also The 'Wales' and the 'Belgium' as Units of Measurement.2Equivalent to 50 football pitches. But you knew that by now, didn't you?