Mute Swans Content from the guide to life, the universe and everything 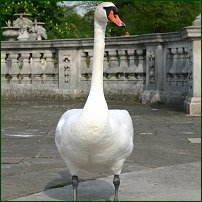 The mute swan, Cygnus olor, is a large and attractive white bird that is frequently seen on Britain's waterways, and is probably the best-known British waterbird. Originating in north and eastern Europe, its population has exploded as a result of regular introductions since the 16th Century. It is immensely popular with children, who like to feed swans with bread. However, its tendency to be protective of its mate and young can also cause it to be aggressive, emitting a frightening hiss and scaring the very children that are feeding it. It is usually seen singly or in pairs, but during the annual moult swans can form large groups, or bevies.

Like all living organisms, the mute swan is classified according to its physical characteristics. This is known as its taxonomy. All birds share the same basic features:

The mute swan is further classified as:

The mute swan belongs to the order Anseriform, or waterfowl, which have webbed feet as an adaptation to living near water. A specialised flat, rounded beak which helps in feeding from the surface labels it as one of the Anatidae family, and this family is split into three subfamilies; effectively, geese, ducks and swans. There are 20 species in the subfamily Anserinae, with two genera; Cygnus - to which the mute swan belongs - and Coscoroba. In the Western Palearctic, which includes Europe, there are three breeding swans of the genus Cygnus; the Bewick, whooper and mute. Being native to South America, Coscoroba are not represented in Britain.

This is a very popular, and arguably the largest and heaviest flying bird in Britain1, measuring 145 - 160cm long, with a wing span of 208 - 238cm. It weighs 7 - 14kg. Both sexes are pure white, although the head and neck may have a dirty grey-brown tinge due to water immersion. The mute swan is large and stocky, with a rounded head and long curved neck which distinguishes it from the other resident swans whose necks are straight. The bird has an uplifted short tail, and an orange bill with a black knob at the base, both of which are diagnostic2. The male is often seen with wings arched in a threatening or mating display, or when carrying its young, known as cygnets. The bird has a strong, graceful, whiffling, whoomphing flight with neck and legs outstretched, and is clumsy and ungainly on land, with a very heavy gait on its distinctive large black feet and legs.

Its preferred habitat, in the west, is in close proximity to human habitation, often on managed and controlled waterways, lakes and ponds. Primarily vegetarian, mute swans feed on aquatic plants up to one metre under water; these are obtained by the bird upending or immersing its head and neck below water. They will also forage on emergent vegetation as well as grazing on grassland. Invertebrates and small aquatic animals may also be eaten on occasion, possibly accidentally.

The nest is a large mound of aquatic vegetation around one to four metres across, lined with green vegetation, and occasionally a small amount of down. It is usually found floating in reeds at the water's edge. The eggs are pale green, rounded at both ends, with a clutch of five to eight eggs laid between mid-March and mid-May. Incubation takes from 35 to 40 days, with the cygnets fledging at 120 - 150 days. The young are born active and stay with the parents until the next breeding season, when they are very aggressively driven away3, and may even be killed if unable to escape. The birds are monogamous and are widely believed to pair for life.

Rarely vocal, having a coarse, rapid snort with a strong honk, the bird is more often associated with its aggressive hissing alarm call. It is this silence that gives the bird its name. The bird is vocally silent in flight, but does have a heavy, distinctive 'whoomph' sound, created by specially adapted wing feathers.

The mute swan exhibits different behaviour in the Eastern Eurasian area, compared to the west. In the east, the bird is very shy and migratory, being wary of man, while in the west the opposite applies, preferring man's closeness and being largely non- migratory. The British population consists of around 11,000 pairs, and an overall British population of 45,000+ birds, although the population did experience a major hiatus recently (see below).

The mute swan is believed to be a non-native bird, imported by the Normans from North and Eastern Europe. However, archaeological digs have found bones dating back 2,000+ years, but the population appears to have exploded around the 16th Century, probably due to introductions and good management.

The mute swan has a very special place in British history, as well as British hearts. It has been a protected bird from as early as 966 AD, if not earlier, and was a prized table bird, yielding 9kg of roast meat. In one season, Henry VIII procured over 350 birds. The reason for its desirability may have been its size, making it ideal for banquets. One of the most popular meals served during the Tudor and Elizabethan era was the ten-in-one roast. This consisted of a swan stuffed with a goose, duck, mallard, guinea fowl, chicken, pheasant, partridge, British pigeons and woodcock and would feed 30. The swan would be skinned, still with feathers attached, roasted with the other birds stuffed within their respective body cavities, along with stuffing, and then redressed with the skin for a dramatic appearance at the table.

From 1482, the bird was subject to the Swan Laws, which where probably adapted from older laws. This enabled a strengthening of the links between the bird and the Crown. Favoured nobles would also have the birds' ownership conferred upon them, making them very high status symbols. It is possible that due to this, the swan is often depicted on armorial and heraldic symbols4.

The Swan Laws were overseen by the Royal Swan Master, now known as the Swan Marker. His role was to supervise the ritual of marking Swans using recognisable cuts, notches or brands in the birds' bills, according to the owner's mark. Unmarked birds were deemed the property of the Crown, and many people think this is still the same today, although that is only true upon the River Thames in modern times.

This practice has largely disappeared, except in two distinct areas. The first is the River Thames, where the annual Swan Upping, is carried out in July.

The other popular location is the Abbotsbury Swannery in Dorset. The Swans, on this site, can be traced back to the 12th Century. They were kept and managed by the Monks of Abbotsbury Monastery. The docile birds were separated and specifically bred to remove their aggressive streak, so they could roost and breed in close proximity, something very alien to this species. The most docile would be separated and used to rear chosen cygnets to create an ultra tame flock. When the monasteries where dissolved by Henry VIII, the property and swannery was passed to the Earl of Ilchester. They are still there today, and the tradition maintained.

It is believed that this bird was the inspiration for The Swan Lake Ballet orchestrated by Pyotr Ilyich Tchaikovsky.

During the 1950s and early 1960s the Uppers had noticed a decline in swans being caught. Checking through past records there had been a significant dip in numbers, and birds that were caught appeared weak, with some having a noticeable 'kink' to the neck. After testing it was found they were suffering from lead poisoning. During the 1900s coarse anglers used lead split-shot to weight their lines. These were often lost and sank to the bottom of the water, or were discarded on riverbanks. In some areas as many as 1,400 shots could be found in a square metre. The swans would swallow the pellets as grit for their gizzard which is necessary to break up cellulose to aid digestion. Unfortunately the lead also breaks down and enters the bloodstream with fatal results. This information led to a voluntary lead shot ban in the early 1970s and eventually to a complete ban in 1987. This, and good riverside management, has led to a noticeable population increase.

Aside from lead poisoning, another major cause of death was the proliferation of cables running from pylons at the same height as the birds fly. This caused severe injuries or even death to the birds that are believed to be very short-sighted, so large coloured spheres are now attached to the cables to reduce injury.

Another danger arises in the summer when, in the hot weather, mirages confuse the swans into thinking railway lines are waterways. The birds cannot just descend to the ground, but surf on their large feet, gliding to a halt, on water. Unfortunately they attempt the same on railway lines, suffering fractures to wings and/or legs, or even death. A solution has not yet been found to this problem.

However, possibly the worst injuries come directly from man. Recently there have been worrying reports of birds found with crossbow quarrels piercing them and shotgun injuries, as well as decapitation by swords, and stabbings. Many are thought to have been caused by youths.

Plastic can-holders are also a hazard. These get wrapped around the neck, bill, wings and legs of waterfowl, causing death by strangulation, starvation or drowning. This is easily prevented by cutting can-holders into small pieces, ensuring there are no loops to cause problems before discarding. Something we should remember when disposing of our waste.

1The recently reintroduced white-tailed sea eagle has a larger wingspan and is heavier.2In other words, these are key points for identifying the bird as no other swan has these physical attributes.3This Researcher has seen this on the Thames and reported it to the RSPCA, only to be told it is common behaviour.4This Researcher's School armorial was a Cygnus Royal (a mute swan with a chained coronet around its neck), head descending and drops of blood appearing from its beak.