Ring-necked Parakeet Content from the guide to life, the universe and everything 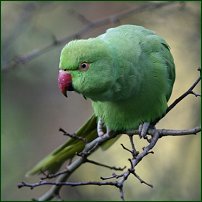 The ring-necked parakeet, Psittacula kramerii, is also known as the rose-ringed parakeet. Its native habitat is in the foothills of SE Asia, although it is also found across Africa, running east from Mauritania and Sene-Gambia, to Ethiopia, Djibouti and Somalia. However, it has found its way into England, and is now its only native 'parrot'. It is probably recognised more by its vocal shrill kee-akk kee-akk kee-akk call than by sight, except in areas as mentioned below. If you see a bird that is bright green, appears to be highly-strung, is easily disturbed and is squawking its head off, the chances are it is a ring-necked parakeet!

Like all living organisms, the rose-ringed parakeet is classified according to its physical characteristics. This is known as its taxonomy. All birds share the same basic features:

The ring-necked parakeet is further classified as:

Parakeets are a diverse group of parrots, which are found throughout Asia, Australia and below the equator in Africa. Typically they are small- to medium-sized birds with a long tapering tail, shortish wings and the usual parrot-shaped bill. However due to poor taxonomy there are 120 different species listed as parakeets, including budgerigars.

There are around 330 species of parakeet altogether, primarily found in the tropics of Asia, stretching into the higher latitudes of the southern hemisphere. Within the Psittacula genus there are 13 species. Only two are likely to be confused with it, being the Alexandrine Psittacula eupatria and Mauritius Psittacula echo. They are mid to large green parrots, with narrow graduated long tails, long pointed wings, and with a distinctive jerky flight.

This is an immediately recognisable emerald green parrot-like bird, measuring 37 - 43cm full length, with a wing-span of 42 - 48cm. The tail is around 25cm in best condition, being distinctly long and pointed. The male has a distinctive neck-ring running via the throat, lower nape and cheeks, which is black around the throat, and becoming red toward the nape. The female has a less noticeable emerald ring. It nests in tree hollows; the nest itself is generally no more than an untidy layer of dust or debris. The clutch usually consists of three to four eggs laid between January and June, although two broods may be becoming more common. The eggs take between 25 and 28 days to incubate, with the female being the sole incubator. When hatched the young are naked and helpless, taking eight weeks to fledge. The adults appear to bond for life.

The bird, in Europe, is omnivorous and is a regular visitor to bird tables and feeders. In its native habitat it feeds on seeds, fruits, flowers and nectar and is seen in flocks of typically two to seven birds, although larger flocks are not uncommon. The call is a loud distinctive screech 'kee-ak...kee-ak...kee-ak' with a warning call of a series of 'ak...ak...ak'. The birds appear to live for up to 30 years.

The birds are recognised as largely being distributed within the Home Counties: London, Kent, Sussex, Surrey and Berkshire. There are also populations in Essex, Manchester, Liverpool and even a possibility of the birds being found in Glasgow, but these have not been confirmed as established. Other small populations may exist. The current population is estimated at around 20,000 and expanding rapidly. This figure is not definite at the point of writing.

A pair were first recorded as having bred in Norfolk in 1855; however there were no further reports until a scattering appeared in the 1930s. There were no further significant reports until 1969, in Kent. The population in 1983 was reported to be estimated at 500-1000, increasing to several thousand by 1991, and continually growing. They were added to the British Ornithologists' Union's Official Bird List in 1983, having reached self-sustaining levels.

It is rumoured that the first birds escaped from an aviary in Northdown Park, Margate, in Thanet, Kent, during a storm in 1987. However, as the parakeet had breeding status four years before, this is clearly untrue. There is also a story that a small number of birds escaped from Shepperton Studios in 1951 during the making of The African Queen with Humphrey Bogart and Katherine Hepburn. Another belief is that Jimi Hendrix brought them to Britain, and then released them to 'bring some psychedelic colour to London's skyline'. However no-one is entirely sure.

Kent, being the Garden of England, enabled the birds to thrive on the fruit and flowers in the orchards and they have gradually moved west and north, creating pockets around Sidcup, with a very large flock situated at Esher Rugby Football Ground of around 7,000 birds. This is now reputed to be the largest flock in England. The population is so dense that the footpath below the roost has had to be closed for health and safety reasons due to the volume of guano deposited by the birds.

The birds are classed as a pest by many, as they have no natural predator. They are very wasteful, often only taking one peck at a piece of fruit before moving on. They also wantonly decimate the blossoms on fruit trees for no apparent reason, creating a heavy loss to farmers. There have been calls for eradication by some Kent fruit farmers. The birds are also becoming unpopular in urban areas. The birds have quickly learnt how to use bird feeders and have a voracious appetite, stripping feeders within 30 minutes. Their arrival in gardens causes all the wild birds to scatter, and then they proceed to decimate the feeders. It is also believed that, due to its nesting habits, it is competing directly with other hole-nesting birds such as owls and woodpeckers, causing their decline. It is estimated that with its present breeding rate, it will exceed 100,000 birds by 2010. For comparison, this is equal to the current UK kestrel population. Control or eradication is likely to prove difficult, as these are urban birds, fast-flying and with an erratic flight pattern. Their plumage also makes it almost invisible in foliage. The ring-necked parakeet could be deemed the 'ultimate stealth avian'.

There are other parrots that are at large in the UK, namely the monk parakeet (1987 onwards), Alexandrine parakeet (1997 onwards), blue-crowned parakeet (2001 onwards), and rosy-faced lovebirds (2002 onwards). They do not appear to be establishing themselves as rapidly as the ring-necked parakeets did.

It is certainly true that this is not a dead parrot by any means!