The Isle of Thanet, Kent, UK Content from the guide to life, the universe and everything 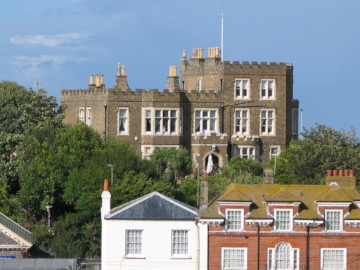 The Isle of Thanet1 is the north east corner of Kent, England, bounded by the North Sea (north and east), the River Stour (south) and the River Wantsum (west) - the latter now so silted up that, when it appears above ground, it's just a mere trickle.

Thanet was a true island until the 16th Century, when the River Wantsum finally gave up the ghost, and includes the Victorian coastal resorts of Broadstairs (see below), Margate2 and Ramsgate with its Royal Harbour. These were popular with the residents of East and South London as holiday locations, nearly as popular as Southend, Clacton and Brighton. Other notable towns and villages are Acol, Birchington-on-Sea, Cliffs End, Cliftonville, Manston, Minster, Monkton, St Nicholas-at-Wade, Sarre, and Westgate-on-Sea. Thanet has its place in ancient history - it was one of the first landing sites for the Romans, Saxons and St Augustine.

Where to Eat and Drink

Thanet has an abundance of eateries and public houses. If you like junk-food there is both a McDonalds drive-thru and a Burger King drive-thru within a mile of each other on Margate Road, Broadstairs.

If you are looking for something different, a highly-recommended restaurant is Noknoi's Kitchen in Ramsgate Harbour - a family run Thai restaurant. For something cheaper, The Emperor of China, Queen Street, Ramsgate is ideal.

There is a wide range of sporting venues in Thanet. If you are into cricket, golf, bowling, tennis, football, snooker, gymnastics, rugby or sailing you'll find something in Thanet.

How to Get to Planet Thanet

As Star Trek-style transporters have yet to be invented, 'beaming up' to Planet Thanet is not an option. However, there are more conventional ways to get there - if you really have to.

1Pronounced locally as 'Ffani' - the 't' is very, very silent.2Made famous by Chas'n'Dave's ode 'Margate' and the episode entitled 'Jolly Boys Outing' from the hit British TV programme Only Fool's and Horses.