A Hurricane from Hawkers Content from the guide to life, the universe and everything 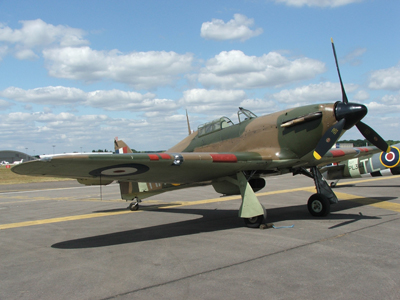 The Hawker Hurricane was always overshadowed by its more famous stable-mate, the Supermarine Spitfire. Despite this, it was the cornerstone of Britain's air defence from 1938 to 1941. It proved a reliable and adaptable aircraft, limited only by its unadventurous aerodynamics.

The Hurricane was designed by Sidney Camm (later Sir Sidney) and his team at Hawkers. It answered the RAF's requirement for a single-seat, single-engined fighter, armed with eight Browning machine guns. This number of guns was specified after tests showed that, in aerial combat, a target would only be engaged for a maximum of three seconds. It would take eight Browning machine guns firing at a rate of 1000 rounds per minute to damage the target with .303" ammunition within that time.

It was the first modern monoplane fighter for the RAF, although its design and construction was based on the current technology for biplane fighters. The wing cross-section was rather thick and it was this factor that limited its development. This increased drag1 lowered its potential for speed. The Spitfire, on the other hand, was a state-of-the-art aeronautical design and quite advanced for its day. Although this allowed it to be developed throughout the war, teething troubles and slow manufacture initially limited its introduction in large numbers.

The Hurricane was a low-wing monoplane powered by a single Rolls-Royce Merlin piston engine. It had a metal frame covered with fabric, with engine cover plates and leading edges made of aluminium plate. This was similar in most respects to the biplane fighters that preceded it, allowed quicker manufacture and, as it turned out, a high degree of survivability after battle damage. For the first time, all the guns were carried in the wing, outboard of the propeller arc. Although this had the potential of spreading the shot, all guns were 'synchronised' to fire at a point about 200 yards in front of the plane to concentrate the fire.

Another first was a retractable undercarriage, which, despite the use of a warning klaxon, was occasionally forgotten by experienced fighter pilots as they came in to land. These pilots, more used to fixed undercarriage biplanes, often had at least, embarrassing and at worst, fatal results. These early difficulties were soon overcome and the Hurricane became a respected and much-loved air defence fighter.

There were three times more Hurricanes than Spitfires during the Battle of Britain in the Summer of 1940. The Spitfires were used to keep the German fighter cover at bay while the Hurricanes went after the bombers. So successful were these tactics, that the Luftwaffe soon switched to night operations.

Eight Browning machine guns were found to be not quite enough, so Hawkers produced the Mark IIB, which boasted 12 Brownings in the wings. Only the Hurricane could do this as the Spitfire had only just managed to fit eight guns within its slender wing. However, the days of the rifle calibre machine gun were numbered. The new North American Mustang I, although not suitable for air defence, boasted two 0.5" guns as well as four .303". These still fired solid or incendiary ammunition, but this was not a match for the Messerschmidt Bf109E with two 20mm cannon.

The thick wing of the Hurricane had its advantages as well as disadvantages. It allowed the comfortable installation of four Hispano 20mm automatic cannon, which promised even speedier destruction of Hitler's bombers. Alas, the weight deprived the Hurricane of even the inferior performance it had to tackle German fighters. The first cannon Hurricanes (Mark IIC) were used as night fighters as there was no fighter escort at night. The combat contact time using explosive shells was much reduced and this allowed, in theory, the Hurricane to make the most of fleeting nocturnal meeting with bombers. It was not successful at night interception and too small to carry radar that could be operated by the pilot alone.

The end of the Hurricane as an air defence fighter drew to an end as faster and more heavily armed German fighters appeared. As 1941 drew to an end it was obvious that Hitler's invasion of Russia meant that the heat was off Britain.

With no major enemy bombing campaign, there were many fighters that could now be spared for other activities. These activities, it was decided, should take the fight to the enemy on his own ground, continental Europe. The Hurricane was a well-armed fighter and, given the weight of firepower available, it was a natural step to apply this to ground targets. So the Hurricane became a ground-attack aircraft. The Mark IIA (8 guns) and Mark IIB (12 guns) also managed to lift and deliver a couple of 250lb bombs. The Mark IIC (4 cannon) was also used against trains in France with some success.

At sea, there were few aircraft carriers so convoys were subject to air attack for much of their journey in the eastern Atlantic and on their way to Russia. To solve this lack of cover, battle-worn Hurricanes were used on CAM (Catapult Armed Merchantmen) ships. These had a catapult on the bow together with one old Hurricane. The idea was, once an air raid was imminent, to launch the fighter to attack. Obviously, there was no place to land and recover the Hurricane. Once its fuel was nearly exhausted, it would land (crash!) in the sea and the pilot rescued.

It was a desperate stop-gap measure - but it worked. It provided some time until the new escort carriers could be developed sufficiently to provide air cover, many using Sea Hurricanes, equipped with arrester hooks2. These too were older aircraft and replaced quite quickly as more modern aircraft became available.

Taking ground attack further; Hurricanes were fitted with eight 60lb rockets and developed the tactics used by the Hawker Typhoon from 1944 onwards against tanks, trains and fortifications. More precise attacks were made by Mark IVs armed with two 40mm anti-tank guns carried under the wings which used 2 0.5" Browning machine guns in the wing for sighting. The attack was made from very low level, conventionally armed Hurricanes providing close escort. Ranging shots were fired from the .5" guns which had a similar trajectory to the 40mm guns. On registering hits with the sighting guns, the pilot fired one or two shots from the 40mm guns. These were used in the Western Desert and proved capable of knocking out even the heavily armoured Tiger tank. This had a very severe effect on the morale of Panzer crews. This method of attack was gradually taken over by rocket-firing Hurricanes from 1943 onward.

The Hurricane's front line role ended in the Far East, where there was less aerial opposition. From 1943 to early 1945, it supported the advance of the 14th Army through Burma in both the air superiority and later, the ground attack role, until replaced by Lend-Lease Republic Thunderbolts. After hostilities ceased, it rapidly vanished from the scene.

Only a small number of Hurricanes survive and there are few airworthy examples. With its more famous partner, it will always be remembered for the defence of Britain in 1940. It was first in a number of fields and was successful in most, some of which the designer could hardly have imagined.

1Drag is the resistance of the structure to air pressure caused by movement.2Arrester Hook - a device to slow an aircraft quickly so it can land in a short distance. The hook engages a wire which absorbs much of the forward momentum.